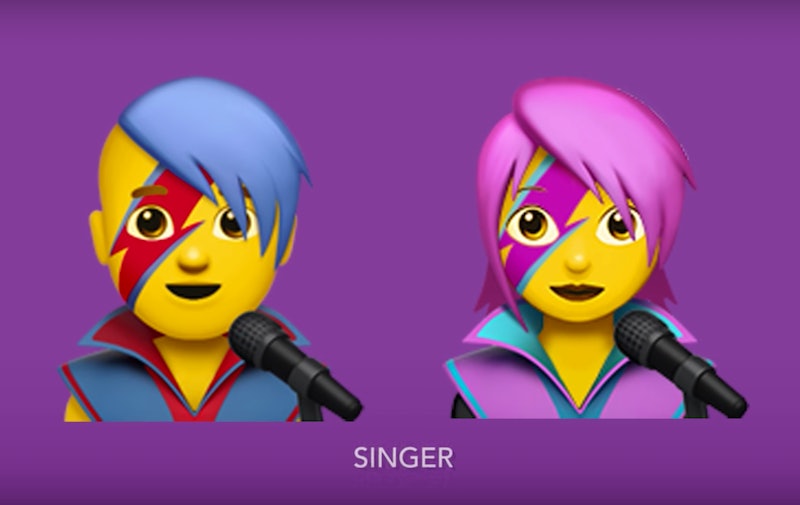 Yesterday, Apple released the much-anticipated update to iOS 10, iOS 10.2. The update comes with more than 100 new emoji, with an increased range of professions (for men AND women), facial expressions, food, and pretty much anything else you could want. How do you get the iOS 10.2 emoji? Simple — all you have to do is update your phone with the new OS.

The 10.2 update includes a number of new features, like the ability to lock your camera settings, new wallpapers, and a new TV app. But of course what people are most excited about at the moment are the dozens of new emoji included with iOS 10.2. With the update, you’ll have 16 new professions available in both genders and five skin tones, including a farmer, health worker, astronaut, teacher, judge, cook, and (my favorite) a punk-ish singer with a Bowie-esque streak of lightning across the face.

You’ll also get 72 new emoji from Unicode 9.0. Among these are two that are sure to get a lot of use: The face palm and the shrug. These non-verbal expressions are so central to everyday communication (conveying “I can’t even” and “Meh” more effectively than any words possible could), that I’m sort of shocked that they didn’t already exist as emoji. How have we survived without them?

Other new additions include an avocado, bacon, a shark, a squid, and a terrifying clown to haunt your dreams:

Er, it's a good thing there's already a "Face Screaming in Fear" emoji.

To get the new emoji, you need to update your operating system to iOS 10.2. Here’s how you do that:

You’ll be asked to enter your passcode and to agree to the update’s Terms and Conditions.

4. After the update downloads, tap “Install.”

Your phone will start to install the update — be patient, it might take a few minutes to complete. When your phone restarts, the new emoji will be right there on your keyboard. You can check them all out here:

Emojipedia reports that, when you include all of the gender and skin tone variations, iOS 10.2 offers 422 distinct emoji to users — and that’s on top of the emoji you already have. It’s probably safe to assume that before too long, humanity will be giving up written language entirely and switching over to an emoji-based communication system — so you’d better start perfecting your emoji-game now.