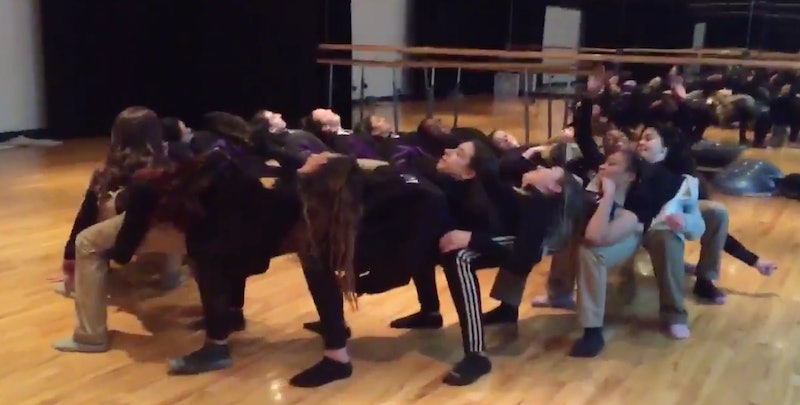 It's been a quite a strange few weeks for ~teen memes~ on Twitter. We were all thoroughly amused by the viral mannequin challenge on Twitter, which extended far and beyond into both the celebrity and political worlds. We then had a dark and rollicking time with the "Trump's coming!" meme, in which teens hit the deck and sprinted away. Next in the lineup is the lazy challenge meme on Twitter, which is arguably more precarious than all of the memes that have preceded it.

See, so far, there's only been an element of risk in these challenges depending on how involved you got in them. The mannequin challenge was pretty simple — just don't move, bro — until some people started adding funny twists to it, posing in difficult-to-maintain positions. The "Trump's coming!" challenge was only difficult because in their haste, people were occasionally knocking over chairs and, well, themselves. But while there has been a sense of community in all of these memes, there is none quite like the trust that is involved in this new lazy man challenge, which is entirely dependent on the full commitment of everyone involved.

The concept behind the lazy man challenge isn't a new one — you maybe even tried it once as a kid. You make a circle of chairs, and everyone leans back on one of them, their head resting in someone's lap and someone's head resting in their own lap until you're just a giant, circle of chair-laying. Then they start rolling the camera as, one by one, someone pulls the chairs out from under them. If it's been set up correctly, everyone should stay exactly the same, supported by each other (awww). And if it hasn't been set up correctly ... well, the weak link will be pretty obvious, because once they go down, so does everybody else.

Of all of the ones shared to Twitter so far, this tweet posted on Dec. 7 by @nutellaANDpizza (username on point) appears to have racked up the most retweets on Twitter.

Here are a few others that have been posted in the days since:

This One That Will Make You Nervous

This One With ~Trippy Lighting~

This One That Was Clearly A Team Effort

This One That Went Hands-Free

This One With Next-Level Choreography

There you have it, internet: definitive proof that the teens were cooler than the rest of us all through this calendar year. Granted, Twitter was not nearly the ~thing~ it is now as it was when I was a #teen in 2009, but I think it's safe to say that we had no good memes except for that one year 90 percent of us doing the "Single Ladies" really, truly should have reconsidered. Hats off, Gen Z. And maybe helmets on, unless you trust your friends doing the lazy man challenge a whole, whole lot.