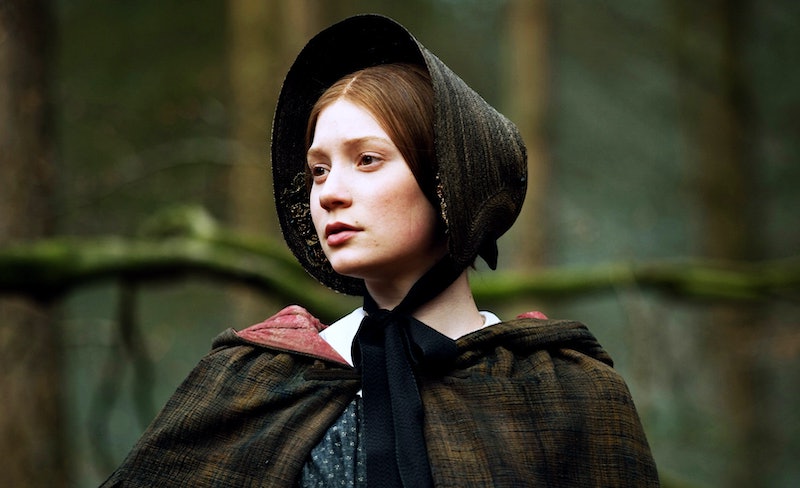 I don’t like Jane Austen. I am female and I like books, so this is a peculiar treachery against my gender. In fact, it was the question “Do you read Austen?” that planted the seed of my book, Unmentionable : The Victorian Lady’s Guide to Sex, Marriage and Manners.

“No. I don’t read Austen," I would answer. "I don’t like stories that take place in a universe where no one ever has to poop.”

Ah, vindication! A 19th-century woman writer I do like, Charlotte Brontë, didn’t like Jane Austen either, and for the same (albeit better-spoken) reasons. When someone tried to make her read Pride and Prejudice, she said that Austen’s worlds were too tidy and boring:

“An accurate, daguerreotyped portrait of a commonplace face; a carefully-fenced, high-cultivated garden with neat borders and delicate flowers; but no glance of a bright, vivid physiognomy, no open country, no fresh air, no blue hill, no bonny beck. I should hardly like to live with her ladies and gentlemen in their elegant but confined houses.”

In other words: "Here we have a universe of dolls, created anus-less, in starched lace, with no complexities unless they are adorable ones."

Now, Brontë, who wrote Jane Eyre in 1847, could not write explicitly about pooping either. But she did take pains to show the grittier, shittier side of life. She wrote about characters who had sex off-page, with prostitutes even. People who got drunk to deal with their lot in life. Children who were beaten, or who died slow deaths. Brontë let the ink of reality stain her pages. (A very personal reality; much of Jane’s life was a retelling of Charlotte’s own). Jane and everyone around her suffers, as humans do, especially in the cold and dirty decades that composed the 19th century.

I have always been interested in the blood, bile, and bite beneath the surface of sanitized stories. So I’ve searched, and believe I can help fill in a few blanks about the daily details of Victorian life that Brontë’s readers would have already known, but have long since been forgotten:

1. What Was *Actually* Wrong With Bertha?

You might remember that when Rochester fell in love with proper, intelligent, controlled Jane, he already had a wife, Bertha. His wife had been a wild and beautiful Creole woman before madness consumed her. Now she stalked the castle, giving the slip to her alcoholic warden, Grace Poole, laughing and screaming and lighting some unfortunate fires. Bertha had troubles. But what were they?

According to one school of thought, exemplified in Jean Rhys’ 1966 “prequel” to Eyre, Wide Sargasso Sea, the only thing wrong with Bertha was having to live in England, among the stilted Victorians that populated it. She was from Jamaica, after all, and not used to the austerity of Victorian life. Her marriage to Rochester was arranged for financial reasons, and some critics think that Rochester was just… sort of an uptight English bastard who locked her away for being too sensuous and human. Maybe that’s what made her go crazy, they say.

But Brontë doesn’t present the situation to us that way, and it is her book.

When Brontë wrote Eyre, a new term for "madwoman" was just beginning to take hold in the medical community. Had the book been written ten or 15 years later, Bertha would be suffering from hysteria. Hysteria means... well, actually, any condition a woman suffered, from diabetic coma to schizophrenia to cramps, could be chalked up to "hysteria." It simply meant that the seat of her womanhood, her womb, had gone sour and addlepated her brain. The doctors of the day would have attributed Bertha’s hysteria to the fact that she was from Jamaica, Creole, childless, and had not properly internalized the shame of being a woman. Many treatments would have been tried, from fire-hose-strength water jets pummeled against her uterus to just plucking the whole mess out with a hysterectomy. For Bertha, though, the only answer was the attic.

The doctors of the day would have attributed Bertha’s hysteria to the fact that she was from Jamaica, Creole, childless, and had not properly internalized the shame of being a woman.

Truthfully, locking her in that attic was not an act of cruelty on the part of Rochester. Brontë showed us what life was like inside a decent institution/asylum, as we watched poor little Jane growing up in the strict Christian Lowood School. Even a school devoted to shaping sweet young ladies was teeming with abuse and starvation and typhus. Where could Rochester have sent Bertha that would have been better than his attic? A halfway house program to focus on her reintegration to society through the use of strong anti-psychotics and cognitive therapy? In the 19th century, they called those places "prisons for the insane," and the cognitive treatments were called "beatings."

Jane and all the other upper members of the household would have used a "close stool" in this era. That is, a bucket inside a nice little stool with a hinged lid to help contain odor, kept tucked away by the bedside. The servants (whom we never meet, because they aren’t quite people) would take the bucket away a few times daily to dump its contents into a cesspit behind the manor. Since Victorian women were governed by routine — eating at the same time daily, taking physical exercise at the same time — bowel movements and even urination were probably as well-timed as the rest of their lives. Which is useful when there are large skirts to contend with. Luckily, the Victorians wore no underpants (at least, not underpants as we know them), making the whole business much easier.

Since Victorian women were governed by routine — eating at the same time daily, taking physical exercise at the same time — bowel movements and even urination were probably as well timed as the rest of their lives.

Thornfield was an "ancestral" home, though, meaning possibly centuries old. And like other older castles, it probably came equipped with "guarderobes" for the senior members of the household. These were little closets inside your bedroom, jutting out a little from the castle wall, containing what you could almost call a window seat. Except the window was an open hole, and you sat on it. You did your business and it… slunk its way down the castle’s stone walls to the open septic field or moat below. The next time you visit castle ruins, look for odd erosion patterns beneath certain outcroppings, showing where urine and feces have eaten away the rock over the centuries. The ghosts of the guarderobe.

3. So What Did Jane Teach Adele About Menstruation?

As little Adele’s governess, it would fall to Jane to teach the girl about menstruation. Some governesses and mothers avoided this lesson, and doctors of the 19th century railed against the cruelty of withholding it, describing terrified girls stuffing snow into their own vaginas to stop the hemorrhaging they were sure was killing them. But Jane would not have gone in for that nonsense. She was a straightforward women.

Adele is 10 in the book, which is the time most parents break out whatever is the currently fashionable edition of the “So You’re Hairy, Smelly, and Bleeding Now” puberty books for their daughters. Jane would not have bothered until Adele was closer to 14.

Some governesses and mothers avoided this lesson, and doctors of the 19th century railed against the cruelty of withholding it, describing terrified girls stuffing snow into their own vaginas to stop the hemorrhaging they were sure was killing them.

Some governesses might have taught their charges that during a girl’s monthly "unwellness," she should retire to bed and lay upon a protective leather (or rubber, later in the century) sheet or specified absorbent flannel until it had passed. But sensible, industrious Jane would not have tolerated that sort of silliness.

Jane would have taught Adele to make her own menstrual belts from wool or cotton, sewing on cloths about the size of dish towels to run the length of her undercarriage from belly to just above the buttocks. After use, these cloths would have been soaked in buckets of lye and water for a while before servants scrubbed and air-dried them for reuse.

4. The Wedding Night — Not Really Our Business, But Who’re We Kidding — What Happened?

Well, it was going to be a great wedding night, before those guys showed up at the church and reminded Rochester he was already married to that "clothed hyena" in the attic. And even though he told Jane they could go and live as a married couple far away — somewhere warm and sexy — Jane declined. In the 19th century, was mistress is a mistress, no matter how extenuating the circumstances, and Jane had no intention of being a plaything.

When she finally did marry Rochester, it was after he had been badly burned and blinded while trying to save his household and his first wife from the fire she’d started.

In the 19th century, a mistress was a mistress, no matter how extenuating the circumstances, and Jane had no intention of being a plaything.

If the crippling from the fire had left Rochester unable to perform sexually, no marriage would have taken place. Women had the right to reproductive sex from virile husbands; that was actually a strongly held belief in both Victorian minds and courts of law. Divorces on the grounds of impotence were relatively common. We know from the final pages of the novel that Jane and Rochester’s union produced a son, so we can be sure Rochester’s equipment was in working order.

Women had the right to reproductive sex from virile husbands; that was actually a strongly held belief in both Victorian minds and courts of law.

As for how Brontë herself imagined that magical wedding night, it’s hard to say. She lived a sheltered life, caring for many ailing siblings and working in her father’s parish, and was most likely a virgin until her marriage in 1855 at the age of 37 (a marriage that lasted nine months, ending with her death and the death of her unborn child).

But she was also very well-read. Perhaps she had some access to the burgeoning genre of sexual and marital advice books that appeared in the 1840s. In those books, she would have learned… all kinds of weird junk. The learned men and doctors of the day were still trying to make heads or tails out of sex themselves.

Charlotte might have learned that the fully formed human child, or homunculus, was already waiting in Rochester’s semen, seeking to nestle itself into Jane’s womb in order to grow human-sized.

She could have learned in other books about the medical calamity that would ensue if Jane and Rochester engaged in any sexual position besides the one wherein she lay perfectly still on the bed, legs extended down, NOT raised, with her beloved sort of… planking above her. Should he approach her from behind, sideways, standing up, or with her knees raised too high, she would be at risk for cancers, prolapses, and eventual death.

Jane may also have been in for a rude awakening. It is entirely possible that Rochester carried any number of venereal diseases. Syphilis was rampant in the 19th century, spread by soldiers of Europe’s many wars and the crowding of industrialization, and Rochester could have picked it up as he comforted himself in the arms of women like Adele’s mother after Bertha went mad. (Was Adele actually his child? He claimed not. OK, Mr. Rochester. Sure.)

Venereal diseases were often incurable, painful, fatal, and could be passed along to children during birth. So we need not imagine quite that much blood and bite in the lives of the characters Bronte built for us. Lord knows she punished them enough on her own.

Therese Oneill is the author of Unmentionable: The Victorian Lady’s Guide to Sex, Marriage and Manners, which is published by Little, Brown and Company.