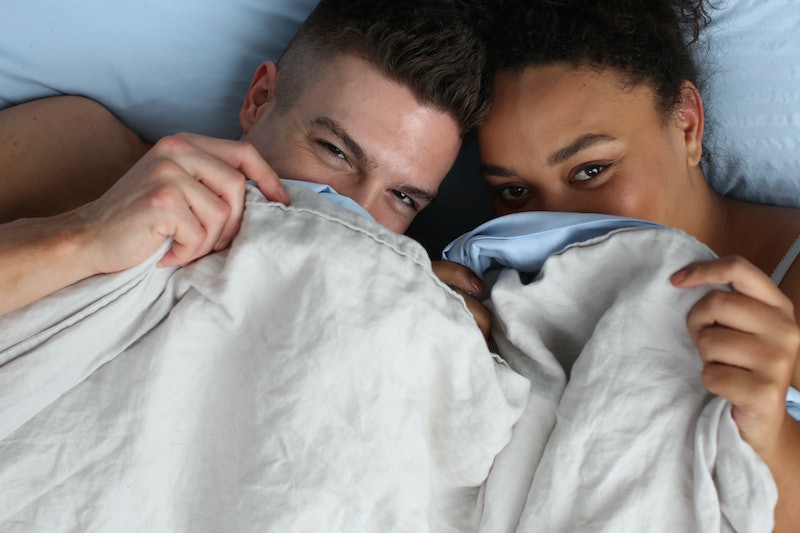 It can be really difficult having sex at your parent's house, or your partner's parent's house, so if you're in a couple this season is basically a sexual minefield. But that doesn't stop us from trying. According to the survey, 75 percent of people have had sex at a relative's house over the holidays and 50 percent have had oral sex. So it doesn't matter who's around— we still really, really want to get down. Blame it on the eggnog.

“Nothing makes sex hotter than adding a bit of risk and a new environment," an Ann Summers spokesperson said in a press release. "Squeezing in a quickie whilst away with friends and family this Christmas is a great way to spice up your sex life — just be careful where and when you do it, you don’t want to get caught and have the story brought up every year!"

1. 43 Percent Were Caught In Somebody Else's Bedroom

I mean, this sort of makes sense if you're visiting extended family, because you wouldn't have your own bedroom. But aren't most couples going to one of your parent's houses? Some people will surely be in their childhood rooms. That may mean having sex on weird Power Rangers sheets, but you don't need to go into someone else's room to do it.

2. 40 Percent Were Caught In The Bathroom

3. 36 Percent Were Found in Their Parent's Bedroom

Shut. The. Front. Door. So out of the people who were caught, 36 percent were found in their parent's bedroom. This one really shocked me. Maybe I just don't get the transgressive element of having sex in your parent's room. Maybe it's because of the risk of horrific awkwardness at the dinner table if you're caught. But people are doing it — and doing it right in Mom and Dad's bed.

Having sex at home can be tough, and you may not want to let the holidays go off without a bang just because you're at your parent's house. But it doesn't take much not to get caught, so pick your time wisely and stick to a private space. And, for the love of god, is it that hard to use a lock?