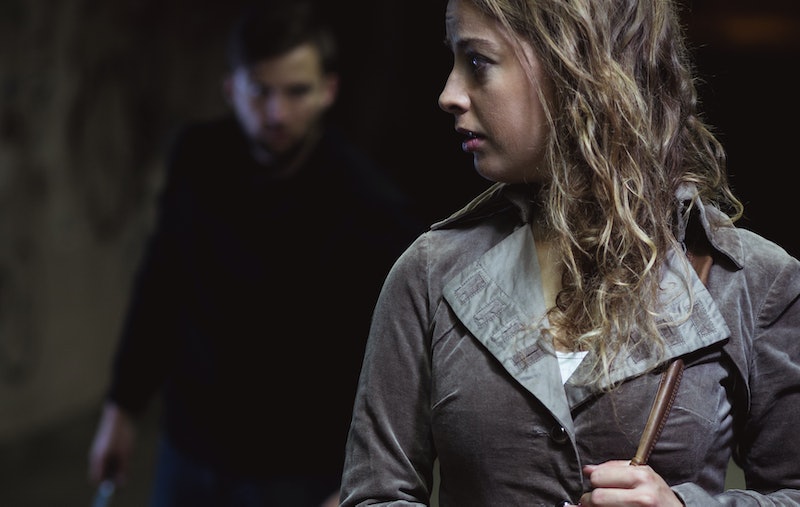 Despite the prevalence of sexual assault and harassment and the objectification of women in the media, many still claim that the concept of rape culture is mere feminist propaganda. But there are plenty of statistics proving rape culture exists. While feminists wish rape culture were a myth — goodness knows a world where it didn't exist would be a better one — research suggests that's far from the case.

In Transforming a Rape Culture , author Emilie Buchwald defines the phenomenon as "a complex set of beliefs that encourage male sexual aggression and supports violence against women." She elaborates:

It is a society where violence is seen as sexy and sexuality as violent. In a rape culture, women perceive a continuum of threatened violence that ranges from sexual remarks to sexual touching to rape itself. A rape culture condones physical and emotional terrorism against women as the norm . . . In a rape culture both men and women assume that sexual violence is a fact of life, inevitable . . . However . . . much of what we accept as inevitable is in fact the expression of values and attitudes that can change.

So, rape culture is both an environment that literally encourages rape and other forms of assault and a collection of attitudes that objectify women and devalue consent, which indirectly contribute to the prevalence of sexual assault and harassment.

Here are some studies that show that, in both senses of the term, rape culture is most definitely real.

1. Over A Quarter Of Europeans Think Rape Is Sometimes OK

A European Commission survey found that 27 percent of 30,000 Europeans polled think there are some circumstances when it's OK to have sex with someone without their consent, such as when they're dressed revealingly or have gone to someone's room. Over half of people in Hungary and Romania believed this.

2. A Third Of College Men Would Rape Someone If They Wouldn't Get Caught

A survey in Violence and Gender found that 32 percent of male college students would have "intentions to force a woman to sexual intercourse" if they weren't susceptible to punishment. And a lot of them don't even know this is rape. When the survey asked them if they'd have "any intentions to rape a woman," only 13.6 percent said they would. But forcing someone into sex is rape, no matter what you call it.

3. A Third Of College Women — And Even More Genderqueer People — Have Been Touched Without Their Consent

According to a 2015 Association of American Universities Campus Climate Survey on Sexual Assault and Misconduct, 33 percent of women in college have experienced some sort of unwanted sexual contact, in addition to 39 percent of TGQN (transgender, genderqueer, questioning, or non-conforming) people and nine percent of men.

A Washington Post-Kaiser Family Foundation survey found that only 47 percent of college students consider "sexual activity when both people have not given clear agreement" to be sexual assault, despite laws in several states dictating that only a clear "yes" constitutes sexual consent.

5. Nearly Half Of Middle Schoolers Have Experienced Verbal Sexual Harassment

And 21 percent have experienced unwanted physical contact, according to a new study in Children and Youth Services Review. Another observation the authors made was that these children often discounted their experiences of sexual assault, harassment, and bullying by saying it was a joke or not a big deal. Rape culture not only allows these things to happen but also teaches us to downplay them — and in order to take them more seriously, we first need to acknowledge that rape culture absolutely exists.

More like this
Scotland's First Period Dignity Officer Is... A Man?
By Darshita Goyal
Beyoncé & Madonna’s “Break My Soul” Remix Honors A Group Of Black Icons
By Stephanie Topacio Long
We’ve All Had Bad Sex. Nona Willis Aronowitz Is Talking About It.
By Sophia Benoit
Bustle Newsletter: August 12, 2022
By Stephanie Talmadge
Get Even More From Bustle — Sign Up For The Newsletter