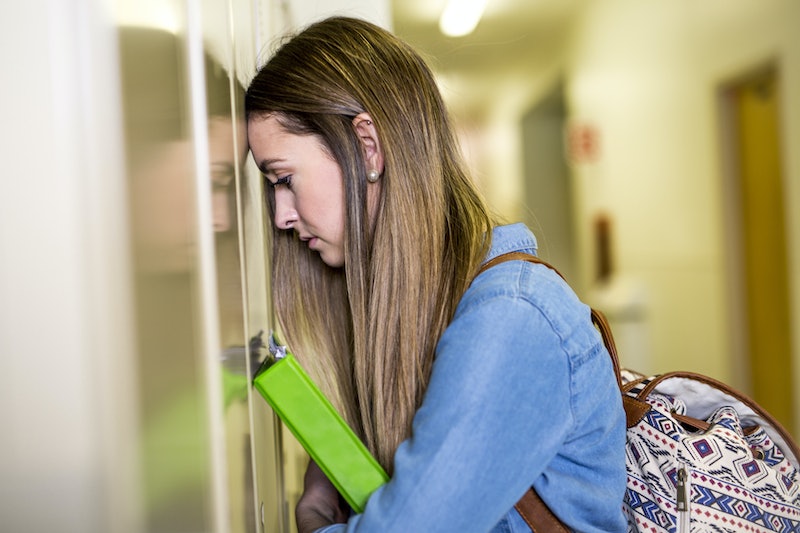 We frequently talk about the objectification of women, but what we don't always discuss is the objectification of girls. But as a new study in Children and Youth Services Review shows, we need to. According to the data gathered by the study, 43 percent of middle school students have been verbally sexually harassed, 21 percent have been touched in inappropriate ways, and 18 percent said someone had gotten uncomfortably close when they brushed against them. Girls were the most frequent victims, but boys were not exempt.

The researchers asked 858 students in fifth, sixth, seventh, and eighth grade about unwanted contact they'd experienced, and in addition to the prevalence of sexual harassment, many had experienced sexualized forms of bullying. 14 percent said their peers had gossiped about their sexuality, and nine percent said someone had even used graffiti to slut-shame or otherwise sexually insult them. Others had been "pantsed" as a form of humiliation. And among a group of 229 of the participants who were surveyed on the "most upsetting thing" they'd experienced, 23 percent had been incorrectly deemed gay or lesbian.

Perhaps most upsetting, among this subgroup, 14 percent of students who had been sexually harassed wrote something invalidating in their accounts of the incident, like that it wasn't sexual harassment or that it was just a joke. "What was most surprising and concerning was that these young people were dismissive of these experiences, even though they described them as very upsetting," lead author Dorothy L. Espelage said in a press release. "Students failed to recognize the seriousness of these behaviors — in part because teachers and school officials failed to address them. Prevention programs need to address what is driving this dismissiveness."

Indeed, perhaps students' teachers and caregivers haven't discussed this issue with them because people don't like to think their children or students could be targets of harassment before they even have their first kiss. But this problem does start young, and by remaining silent, we're only preventing kids from recognizing it.

Earlier this year, women used the hashtag #WhenIWas to discuss their early experiences with sexual harassment. Many spoke about being catcalled, groped, and even physically attacked under the guise of romantic interest before they even reached their teen years. Another hashtag, #WhyWomenDontReport, showed that people often don't report their sexual assaults because they don't believe others will take the incident seriously — or don't take it seriously themselves. One Gender & Society study found that one of the most common reasons girls give for not reporting is not believing the incident was a big deal.

Of course, any form of treatment that makes someone feel like an object or like their body doesn't belong to them is a big deal. The fact that sexual harassment is so common doesn't make it normal, and in order to prevent it, we need to teach kids about consent — not just sexual consent but all kinds of consent. By teaching young people to recognize their boundaries and believe they have a right to defend them, we can help them speak up when they've been violated.