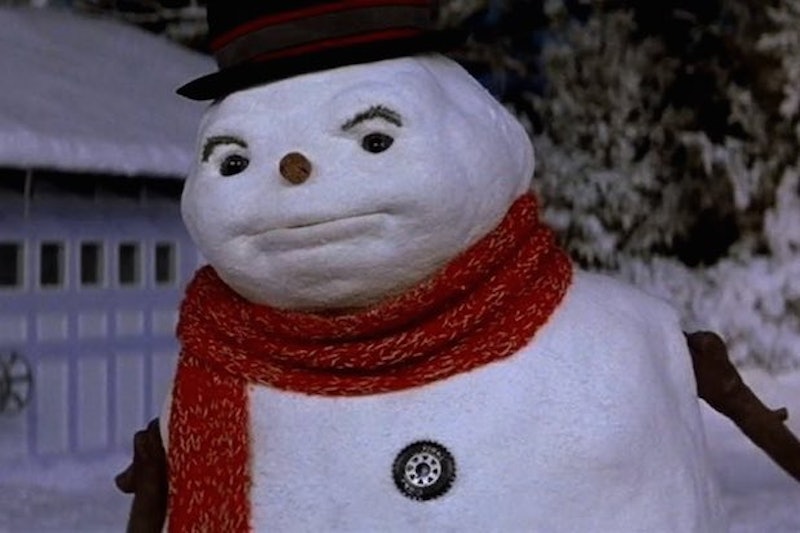 Not all holiday movies from your childhood give you the warm fuzzies. While movies like The Santa Clause, Home Alone, and The Muppet Christmas Carol will likely conjure happy feelings, there are other '90s holiday movies intended for children that likely left all who viewed them scarred for life. Perhaps the film that exemplifies this trend better than any other is 1998's Jack Frost . The movie is seriously messed up, and while it's not as purposely terrifying as the 1997 horror film with which it shares its title, the argument could definitely be made that this "family film" is the scarier of the two.

In case you're unfamiliar, the plot goes like this: Michael Keaton plays a terrible dad named Jack Frost who's in a terrible rock band. After being forced to play a gig on Christmas, he dies while driving home in a blizzard after his windshield wipers stop working. Then, one year later, he comes back to life as a snowman after his son makes a wish on a magical harmonica. Even at first glance, this is pretty disturbing. A kid's absentee father dies and then comes back to life as a snowman? Who cooked up this horrifying and traumatic tale? Clearly, the premise is horrifying enough, but the movie's execution makes everything so much worse.

Once you accept the idea that the spirit of a kid's dead deadbeat dad is inhabiting a snowman, the film relentlessly wears you down with terrible puns, frightening moments, and disturbing scenes until you've lost all hope for humanity. There's a joke that sexualizes a certain dog breed. There's a scene where Jack briefly receives boobs as a snowman and fondles them. There's way too many references to Jack's lack of a penis/balls as a snowman (really, one reference would be too many). And Jack's last line to his son in the film, "I will always hear you," spoken in a raspy ghost voice, is pure nightmare fuel.

Bustle's Rachel Simon, Kelsea Stahler, and Martha Sorren discuss this holiday horror in much greater detail in the latest episode of Bustle's nostalgia-fueled movie podcast, Be Kind Rewind, which you can listen to below.

Did the creators of Jack Frost set out to make the most disturbing winter-set kids movie of all-time? I can't say for sure, but if you look at the evidence, it's hard to argue that they didn't.