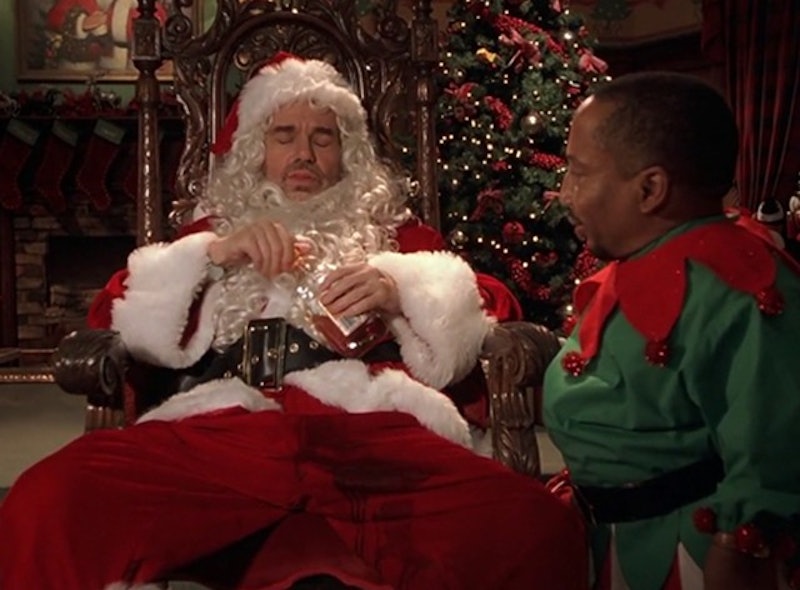 It's hard to believe it, but the Christmas season has arrived. At roughly midnight on Halloween night, a seasonal shift could be felt by people everywhere as stores began tossing out their plastic pumpkins and replacing them with plastic fir trees. Very few will be able to escape the seasonal onslaught, meaning that it's likely you'll be watching a few Christmas movies before you know it. And while there are certainly a good number of great holiday movies out there, there are also several Christmas movies that make absolutely no sense.

Now for some of these movies, it literally seems like the filmmakers were trying to make a non-sensical film. How else do you explain Santa Claus teaming up with Merlin in a movie? You don't. Other examples start out fine, but then somewhere along the journey take a left turn into crazy town. And then there are the movies that seem perfectly normal upon first viewing, but when examined under a microscope they begin to collapse under the weight of their own bizarre logic. So take a look at these 11 Christmas movies with ridiculous plots, and see if you can determine which one is the most nonsensical film of them all.

This is a classic, no doubt, but the whole premise revolves around no one believing in Santa Claus, even though he's real. So who did everyone think was giving their kids these mysterious presents every year?!

2. Santa and the Ice Cream Bunny

If it were the Easter Bunny, then this might make a little sense, but I don't even know what an ice cream bunny is.

The title pretty much sums this one up.

There's a witch, a magical ring, and a talking Christmas tree that thinks its a genie. In other words, it's everything you could possibly need or want in a holiday film.

Let's see, Santa lives in outer space... check. Santa has to fight the devil... check. Santa's sidekick is Merlin the wizard... check. Yep, this fits all the criteria of a bonkers Christmas movie.

Evil scientists want to take over an orphanage, as they are wont to do, but luckily Hulk Hogan's jacked criminal gets hit in the head and believes he's Santa Claus for some reason. Yes, I know that sentence makes no sense.

This isn't a bad movie, in fact it has a sequel coming out soon, but how on Earth would this drunk burglar ever be employed as a mall Santa Claus?

A father dies (quite happily, at least according to the jolly trailer) and comes back to life... as a snowman. Hasn't he ever seen Frosty? This is not a viable life form.

Why do people keep getting reincarnated as snowmen?

You may be wondering how evil elves, Nazis, a virgin, and an alcoholic ex-detective department store Santa add up to make a coherent film. Spoiler: They don't.

I'm not ashamed to say that I love this movie, as it's perfectly fun holiday nonsense — that is until the end, when Howard puts on what is essentially a working Iron Man suit and turns into a real life superhero in what is supposed to be the real world.

These movies all have plots that make no sense, and the fact that some of them have gone on to become holiday classics is nothing short of a Christmas miracle.

More like this
15 Romantic Movies On Netflix That Are Perfect For Snuggling Up On The Couch
By Rachel Simon and Grace Wehniainen
'Elvis,' 'Walk The Line' & 10 Other Movies Where The Actors Actually Sing
By Radhika Menon
What’s New On Netflix: 'Stranger Things' & 'Mean Girls'
By Arya Roshanian
What’s New On Netflix: The Return Of 'The Umbrella Academy'
By Arya Roshanian
Get Even More From Bustle — Sign Up For The Newsletter