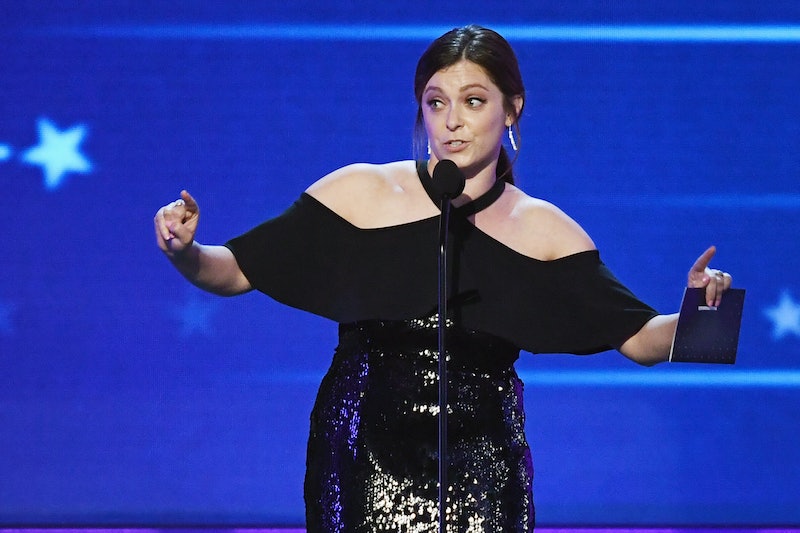 Rachel Bloom's website is called "Rachel Does Stuff." But to say she simply "does stuff" is being modest. The comedian, actor, and writer pretty much does it all. Her hard work in co-creating, writing, and starring in The CW's Crazy Ex-Girlfriend pays off. Bloom has a 2016 Golden Globe for her performance in the show and celebrates winning a new shiny award this week: The 2016 Critics' Choice Award for Best Actress in a Comedy Series. And she's not even 30. Meanwhile, the actor is anxious to learn about Crazy Ex's fate and if it will be renewed for a third season. I'm not worried. Not only because the series is clearly a fan-favorite, but because after speaking with Bloom just before the Critics' Choice Awards on Sunday evening, I know this is just the beginning for her.

There's no denying 2016 continues to be a rough year. But there's no shame in owning your accomplishments and how it was a successful year on a personal level. Bloom does just that, and I admire that about her. "For me, 2016 felt great despite all of these horrible things. It’s weird because I had a very fortunate, privileged year," she says. Both snagging prestigious awards and running a critically-acclaimed show need to be celebrated. "I am incredibly grateful for that. I feel very good about myself," Bloom says reflectively, with a short laugh. Although 2016 is the actor's year, she doesn't let the ladies who make up her dream team go unappreciated. And that's real girl power.

"My co-creator Aline [Brosh McKenna] who runs the writer’s room is also so good at what she does," Bloom gushes. "I know that while I’m on set, she’s kicking ass in the writer’s room." I know her modesty in recognizing those who help her thrive is part of what makes her so damn successful. "I feel very good about myself, but I also feel very good about [my team]... Everyone on the show is firing."

With a shiny new statue and 2017 Golden Globe nomination on the brink of the new year, Bloom continues to dream big. She makes a huge splash on television, and has sights set on the big screen next. "I want to write movies," she says. And she doesn't just want to write movies, she wants to take it back to where it all started. "I’m excited to, at some point, go back to my roots of writing animation and write some sort of animated TV show," Bloom says. Before Crazy Ex, the actor, with a natural knack for writing, contributed to Allen Gregory on Fox and Robot Chicken on Adult Swim. When speaking to Allen Gregory, she says, "I was very proud of to be cast on [that]— this was before everything."

And, oh yeah, there's her crazy successful CW show. "The most important thing is, whenever we find out about Season 3, we’ll just get started," she claims. "Knock on wood." I'm a-knockin' (not that the show needs it). Bloom is unstoppable, and who knew it would all start with a little song called "F*ck Me, Ray Bradbury" a few years back? The sky's truly the limit for the star and I can't wait to see where she soars next.

More like this
Does 'Locke & Key’s Ending Mean There Could Be A Season 4?
By Sophia Moore
Gabby & Rachel Reveal How That 'Bachelorette' Rose Ceremony Twist Happened
By Grace Wehniainen
Every Horror Movie Reference In The 'PLL: Original Sin' Premiere
By Alyssa Lapid
Netflix Just Rebooted A Classic ‘90s High School Drama
By Maxine Harrison
Get Even More From Bustle — Sign Up For The Newsletter