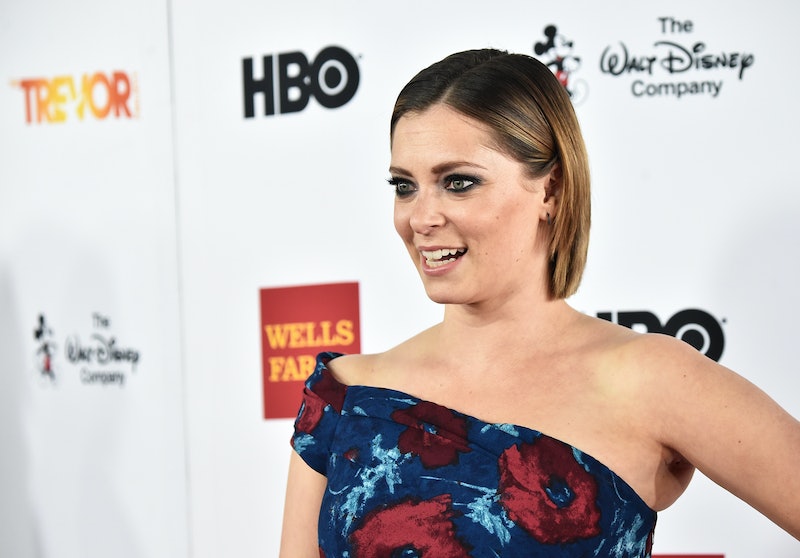 In December 2015, moments after the 2016 Golden Globe nominees were announced, many viewers probably asked: "Who is Rachel Bloom, and how did she earn a nomination in the Best Actress – Television Series Musical or Comedy category?" The first question is actually quite easy: Bloom is the very funny star of The CW show Crazy Ex-Girlfriend , which is very good and you definitely should be watching. It gives a new take on the musical comedy, while also having fun with the unfair stereotype of the "crazy ex" by being raunchy and honest about what it's like to be a woman who's trying to find herself. While it's managed to become a cult hit in its current first season, it's also had to dodge reports that it's going to be canceled before it even gets to Season 2. That's why it's so interesting that the Hollywood Foreign Press decided to nominate the show — clearly, they're a fan and think you should be too. But, more than that, history shows Bloom is a total dark horse in the competition who has a good chance of winning the award come Sunday night.

If you look at the past decade of winners in this category, they are often the unexpected choice — like an actress who is on a new show that may not be raking in viewers, but has caught the eye of critics. Out of the last 10 winners, eight were first-time nominees, and often whose shows were new and only first eligible that same year: Gina Rodriguez for Jane The Virgin (2015), Lena Dunham for Girls (2013), Laura Dern for Enlightened (2012), Laura Linney for The Big C (2011), Toni Collette for The United States of Tara (2010), Tina Fey for 30 Rock (2008), America Ferrera for Ugly Betty (2007) and Mary-Louise Parker for Weeds (2006).

Even more interesting is that in the last decade only, Tina Fey has won more than once, taking home the statue in both 2008 and then again in 2009. When it comes to the Best Actress — Television Series Musical or Comedy category, Crazy Ex-Girlfriend fits better than any show out there — and the Hollywood Foreign Press seems to like going with the ingenue.

Often, it seems the Golden Globes pick their winner in this specific category on the merits of what show they think you should be watching. Sure, all the women nominated in this category are undoubtedly funny — so they choose to use this award as a public service announcement for a small show that needs a bigger audience.

Not to mention that these surprise wins lead to tear-filled, stream-of-consciousness speeches that are great to watch. Last year, Jane The Virgin star Gina Rodriguez's Golden Globes speech had her choking back tears as she thanked her dad and made it clear, "This award is so much more than myself. It represents a culture that wants to see themselves as heroes."

If Bloom wins, I just hope she's got a song ready for the occasion. And maybe some tissues.