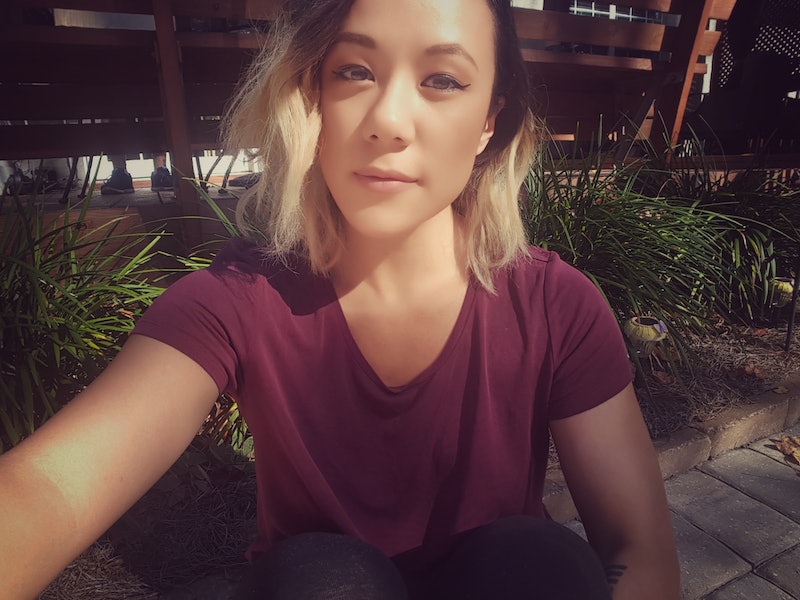 The last time I ordered a chai latte it came out all wrong. I asked for almond milk instead of regular (I'm lactose intolerant), and I requested the barista use just a touch of honey rather than the normal amount of sugar (processed sweets spike my anxiety). When they called my name at the counter, I grabbed my drink, said a quick thank you, and took a sip as I was walking out the door. As soon as I tasted it, I could tell it had been butchered — accidentally, I'm sure — but butchered all the same. I had just coughed up the last of my cash for this beverage, so there was no way I was about to toss it out. I turned on my heels and walked back to the two guys behind the counter.

"Sorry, but..." I started off. They raised their eyebrows at me and smiled.

"Hey, sorry," I said, again. "It's just that I asked for almond milk and honey in this, and I think there's been a mistake."

The line was starting to back up behind me, making me feel slightly guilty, but they kindly took my drink anyway and started all over again. I suddenly felt sheepish about my double feature of apologies; I had done nothing wrong (except agree to pay five whole dollars for a tea). When they handed me my revised chai, I thanked them once again and went on my way.

This is a common occurrence for me. I apologize on the regular for an assortment of minute things: ordering a dish without meat, requesting paperwork from a coworker, asking my partner to pick up something for me on the way home. It seems silly to make these apologies, since I don't "feel regret or penitence," which is a definition of "sorry." I don't even know why I keep expressing regret. It's just become a habit.

So I decided to enter 2017 a little differently: I made it one of my New Year's resolutions to stop saying sorry (unless, of course, I did something heinous), in an attempt to be more confident in my words and actions.

This seemed like an especially relevant resolution, considering the fact that women apologize more often than men, according to a study published in the journal Psychological Science in 2010. The study required 33 individuals between the ages 18 and 44 to keep a diary for 12 days. They documented when they said sorry, why they did, and how often they felt like someone had been offended by their actions. Both men and women equally apologized about 81 percent of the time they felt like they wronged someone.

The difference, however, lied in how often men and women felt like there was actually something to take offense to. Women apparently have a lower threshold for what they think requires reparation, while men are more likely to let a lot of things slide. Karina Schumann, one of the study's researchers and a doctoral student in social psychology at the University of Waterloo, explains to Live Science, "Women might have a lower threshold for what requires an apology because they are more concerned with the emotional experiences of others and in promoting harmony in their relationships."

In other words, when it comes to apologizing when they're sorry for something, women and men apologize at the same rate. It's just that women feel like they have a lot more things to be sorry for, so they say sorry far more often.

Psst! Check out the "You IRL" stream in the Bustle App for updates on Gina's resolutions and daily tips on how to have an empowering 2017. Right now, tweet @bustle about how you plan to make 2017 the best year yet. Use the hashtag #2017IRL, and your tweet could be featured on our app.

It got me thinking about how my partner approaches a barista or a server when his order isn't right. "Excuse me, mate," he always starts off (he's Australian). He never leads with a "sorry." I also couldn't remember a single time he apologized for correcting someone when they misspelled his name, for instance. I, on the other hand, tossed out unwarranted apologies left and right, like candy corn on Halloween night.

Most of the time, my sorry was nothing more than a filler word, like "so" or "um." But I couldn't deny the fact that there were plenty of times in everyday life, especially in work-related situations, when I said "sorry" simply because I didn't want to come off as demanding.

I recalled the last time I was stuck on the couch feeling sick, and my friend kindly offered to bring me a few things from the grocery store. When I called to request that she also pick up a bottle of vitamin C, I predictably kicked off the question with, "Hey, so sorry, but could you also..." I was grateful that she was doing me this tremendous favor, but I didn't want to push the limit and ask too much of her.

Similarly, anytime I have to remind someone at work to complete a task they promised to do, it's always prefaced with a soft apology. The last thing I want is for someone to take me the wrong way or, quite frankly, think of me as a nag.

I could see that my standard sorry represented an internal discomfort I have with speaking up in certain settings. I want to shed this habit in 2017, because not allowing myself to apologize will mean I will also have to find a way to be more self-assured and aware of my language. Plus, refraining from apologizing will encourage me to just ask for what I want, without all the fluff.

When I was young, I remember being asked by adults which doll was my favorite, while the boys around me were being asked what they wanted to be when they grew up. I wasn't exactly taught to be assertive, and society has encouraged us to view strong, outspoken women as "bitches." On the other hand, men have been given the opportunity to do anything and everything without apology for centuries — even if it was at the expense of women. And in today's political climate especially, I'm sick of that bullsh*t.

I know nixing the word sorry from my vocabulary won't solve all of my upcoming problems in 2017. But it's certainly a useful step to take if I want to become more comfortable using my voice without fear of sounding pushy. Besides, so what if I come on a little strong? There's absolutely nothing wrong with knowing what kind of tea you want — and how you want it.

People are cashing in hard on their New Year's resolutions this time of year, so there was actually a line-up of people waiting to write their names on the sign-in sheet when I arrived for the hot vinyasa flow class. The person behind the front desk recognized me as I was waiting in line and said, "Hey, Gloria!" My name is not Gloria, although many acquaintances seem to make that mistake.

I could feel the apology bubbling up from my diaphragm ("Hey, sorry, but it's actually Gina"), but before it reached my tongue I swallowed.

"Good morning," I replied with a smile. "It's Gina, actually." She felt terrible and apologized profusely, but I insisted it wasn't a big deal at all and we were still yogi buddies. OK. Crisis averted.

A study published in Psychological Science in 2010 showed that women have a lower threshold for what constitutes an apology than men have. I had a feeling my threshold was lower than most women's, because I apparently thought correcting my name was a good enough reason to offer an expression of regret. So I spent the rest of the week taking internal notes to figure out exactly where my threshold started.

Apparently, it's most common for me to want to apologize for the following: when I interrupt someone to ask for their help with something, when I correct someone, and when I needed another person to get something done. At least I now know what to look out for in the coming weeks.

Now that I knew what my apology weaknesses were, I felt like I was entering this week with more of a purpose. The very first day, I had an appointment to touch up my hair color, and I knew I was stepping into familiar territory. I told myself I wasn't going to be sorry for asking my stylist for something a little bit different (more gray instead of blonde), no matter how "demanding" I thought it would sound. Do you think Michelle Obama apologizes when she tells designers what she wants to wear? No way.

My stylist is so nice, butter wouldn't melt in her mouth. So it wasn't a problem to tell her exactly I wanted, sans sorry, even if I did have to tell her I wanted something different than what she suggested.

A few days later, I had to send an email to one of my editors telling her that I wasn't available to take on any extra assignments over the next two days because I was feeling really overwhelmed with what I had on my plate, and I simply didn't want to put any unwanted stress on myself. I sat down in front of my computer, took a deep breath, and wrote a polite email to her explaining my situation. At the end of the message, rather than apologizing, I typed, "Hope that's OK!" It was hard to send, because I was fighting off feelings of not living up to her (and my own) expectations, and I was worried I was letting her down. She promptly sent back an email that said, "No problem! Thanks for the update!"

There weren't any other big opportunities to test out my sorry experiment this week, but I'm hoping something in the next couple weeks will give me the chance to withhold apology when I'm in a difficult face-to-face conversation with someone, because that's really when I feel the sorries bubbling up.

Check back in on Friday, January 27 for another update!

Check out the "You IRL" stream in the Bustle App for updates on Gina's weekly progress and daily tips on how to have an empowering 2017.