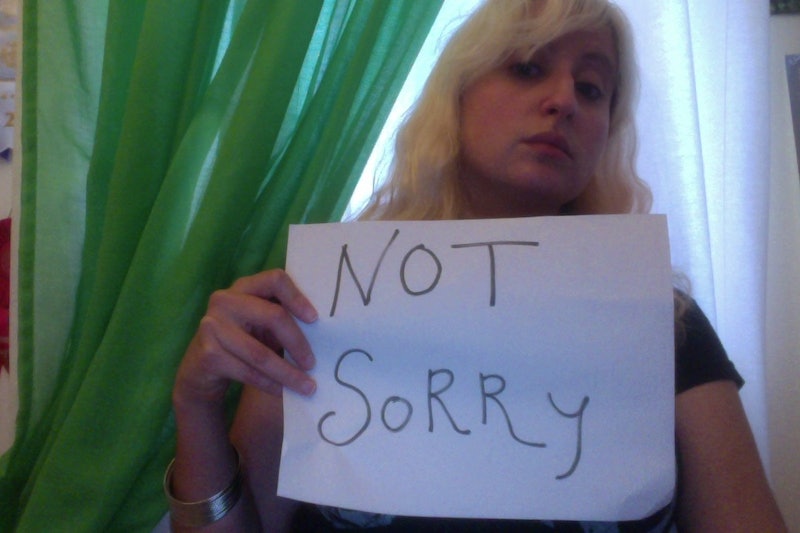 I don't think of myself as a woman who says "sorry" a lot. In fact, if you were to poll a random assortment of, say, my former boyfriends, coworkers, and disgruntled college roommates, most of them would tell you that I don't even have the word sorry in my vocabulary. And yet, when everyone from shampoo companies to Twitter users began examining the way women over-apologize last summer, I was surprised by how much I related.

Because despite the comfort I feel expressing my feelings to a rude subway commuter or someone who refuses to turn off their damned text notification chime during movies, I, too, have done hard time in the over-apologizing trenches — especially in the workplace.

Until recently, I held down a corporate office job that, for a number of years, placed me under the thumb of a temperamental boss whose random rages could only be quelled by my apologies for sundry office annoyances (misfiled papers, missed appointments, too-foamy lattes). Since I've left that job, my apologies have drastically decreased — but that hasn't stopped me from over-apologizing at my new job nonetheless.

Though I've worried for a long time that I'm not good or smart enough to make it in the professional world, before this experiment, I never realized that I was expressing this to my bosses by constantly apologizing to them.

So when my current editor approached me about not saying "sorry" for a week, I thought that not saying it at all would be difficult — but I also didn't think that I would learn much from striking the word from my vocabulary. I was wrong.

I expected tons of slip-ups or occasions that demanded a serious apology would come up over the week. But actually, I only ended up saying "sorry" three times — twice in person to other women, when I accidentally walked into them in crowded bars, and once via email in regards to a horrible-sounding job offer. Yes, that's right, I apologized for refusing a job offer, when, smack-dab in the middle of the experiment, I received an email with an unpalatable ask for some underpaid work that I wouldn't enjoy. "Sorry, can't take this, but thanks for thinking of me," I wrote back.

At my new job as a features writer for Bustle, I found myself equally tempted to apologize for stories running long or late. But remembering my experiment, I also found it easy to gin up alternatives to "sorry" when I was g-chatting with my editor. Instead of saying that I was sorry that a piece would be in late, I'd simply say that it would be in soon. I found that explaining what was actually going on, instead of just offering a reflexive "sorry," didn't seem to annoy her, or anyone else, the way I had anticipated — she seemed to be just as happy with a legitimate update on my work as she would have been with an email full of half-assed apologies.

Surprisingly, when it came to avoiding public "sorry" situations, other scenarios proved easier. When I walked into a man who was also not looking where he was going on the sidewalk, we simply traded terse head nods and went on our merry ways. Similar events like this played out all week, with similar results. No one called me a bitch. No one got angry with me. None of the things I had worried about came to pass.

At the week's end, I looked over how I'd done and found that the results were profoundly lop-sided: The issue of saying sorry to friends or my boyfriend hadn't even come up (I may have been on extra good behavior with them all week in order to not have to address this one, I'll admit), and the elimination of public clumsiness-related sorries hadn't slowed my roll at all. But navigating a world without the business-related "sorry" had been a conundrum.

So the fact that I was still compelled to bust out the dreaded "s" word on a handful of occasions was interesting to me. I felt totally justified in apologizing to those women I knocked into at that bar — listen, no one goes to a bar to have a grown woman say "whoops!" to them. But why had I said sorry when I refused that job offer?

A 2010 Canadian study, referenced in a lot of examinations of women and apologizing, found that women tend to apologize more because their threshold for offensive behavior is lower than mens'. Thinking about my own work history, I doubted that — because, in a near-decade of working in the corporate world and saying "sorry" on the daily, I could count the number of sincere apologies I had delivered on two hands.

Saying "sorry" to friends or boyfriends rarely left me feeling like a liar, but I could easily think of dozens of instances where apologizing at work made me feel dirty; times when I'd apologized for something as a way of seeming less powerful, or as a way of showing my subservience to someone more powerful than me. As Lucy Kellaway noted in a recent Financial Times piece, "I suspect the vast majority of office apologies, delivered by both sexes, are insincere."

I had always feared for my job security when I worked in an office, and my apologies were all based on that fear. Likewise, the "sorries" I delivered in my writing career, which I loved fiercely but feared I wasn't good enough for, were also mostly terror-based — a "sorry" to an editor about a late piece really meant "I feel that I'm an impostor, and I'm terrified you'll never work with me again upon discovering that I'm not perfect and am turning this piece in late."

Which all made me wonder about that above-mentioned research that claimed that women apologized more often because they found more behavior offensive. Could that possibly be it? Or was it actually that women found themselves in so many situations every day — from a crowded subway train to an office — where they felt like their presence was resented or their position insecure, that apologizing for everything they did seemed like a makeshift shield, the surest way to show that they were grateful for every scrap of power or respect that they had?

I had heard every woman I worked with in that office begin a request for a coworker to do something with "Sorry for bothering you," but I had only ever heard my rude male boss, who was regularly promoted and acclaimed by his colleagues, say "Do you have a minute?" I couldn't remember him apologizing in the entire time I'd worked there, a time when he'd made multiple people (including me) cry. My old boss was widely regarded by his coworkers as the rude asshole that he was, but it didn't hurt his career, and lots of our coworkers didn't seem to hold his rudeness against him. I had a hard time imagining a woman acting that rude in the work place without anyone caring.

Which is the great irony of women in any position of power, of course: Apologize constantly, and everyone says you're annoying, sniveling, have low self-esteem; never apologize, and you're just a bitch. It's a set of standards that are so deeply culturally ingrained, it's tough not to believe them about yourself.

As I eased back into the world of apologies at my experiment's end, I wondered if there was a way for me to skip out on this horrible, sexist dichotomy in my own head — to only apologize when I genuinely felt regret, and not feel like a jerk about it. I decided to give it a shot. I had beaten down my reflex "sorry"— the one that comes up when you fear that you might be even slightly inconveniencing anyone — and even though the experiment was now over, it didn't seem to have come back.

I committed to doubling down against the "business sorry" in my work, as well. I am trying to actually explain specific situations or needs to my bosses, instead of just using "sorry" as short-hand for "I am not confident that I deserve this job or your time." I don't know if it will work. But I'm going to find out.

We're raised to give out insincere apologies that are actually just displays of power and subservience from the time we're little kids ("apologize to Timmy for cracking him across the head with those Duplos right this second!") — so it's no wonder that a lot of us have a royally messed up relationships with the idea of saying sorry. But I don't think our only options are to keep saying "sorry" constantly, or go full #sorrynotsorry ever again.

Though I've worried for a long time that I'm not good or smart enough to make it in the professional world, before this experiment, I never realized that I was expressing this to my bosses by constantly apologizing to them. I thought my work sorries were a neat trick, a lie to distract coworkers from how unworthy I was, but in reality, they were genuine — they were just a genuine expression of my low self-esteem, not my genuine regret about jamming the copier.

I'm not going to claim that this week taught me that I'm good enough, I'm smart enough, and gosh darn it, people like me — that's a project I'm going to spend the rest of my life working on. But it did teach me that there's no way to say a word dozens of times every week and not be impacted by it on some level. Instead of protecting me, my "sorries" eroded me. I don't know if permanently cutting back on them will completely change my life, but I think it'll help me realize that my existence isn't something that I need to apologize for.

More like this
Here's How To Support Jewish People Amid Rising Antisemitism
By Hannah Orenstein
These Are The 3 Most Mellow Zodiac Signs
By Kristine Fellizar
Here's Your Horoscope For November 23, 2022
By Mecca Woods
Prince William Condemns “Unacceptable” Comments Made To A Black Guest At Buckingham Palace
By Shahed Ezaydi
Get Even More From Bustle — Sign Up For The Newsletter