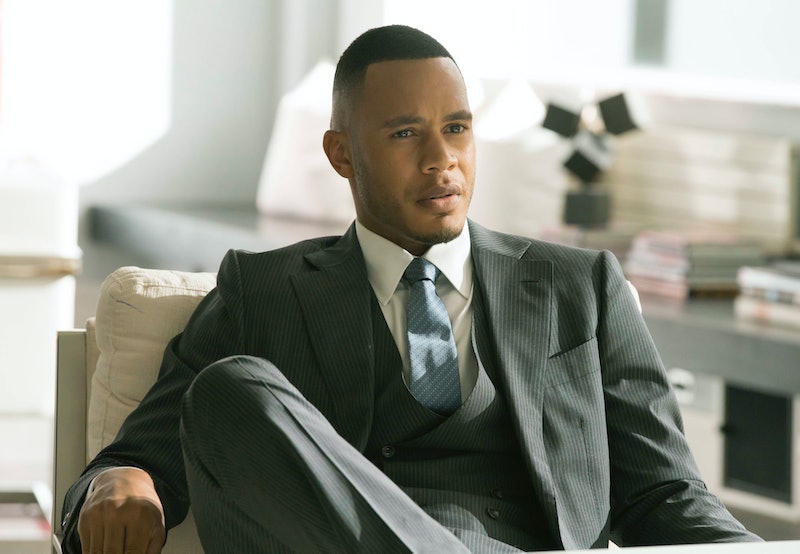 Empire has hit the middle of its third season, and Andre is pretty much where I thought he’d be: plotting to kill his father, Lucious. No, seriously, let me say this again: Andre is plotting to kill Lucious on Empire. It was only a matter of time after his wife, Rhonda, died, and he fell in and out of his medication for bi-polar depression, that Andre would spiral off the deep end. Guys, we are off the deep end now. In fact, Andre has enlisted producer Shyne to help kill Lucious, since the eldest Lyon brother is far from the only one with a grudge.

Andre’s disloyalty toward his family has been a cornerstone of Season 3, especially after Anika knocked Rhonda right off a roof, killing her. (Oh, and Anika killed their baby, too, so that’s another check mark against her.) Andre has already orchestrated a hack of Empire Enterprises’ files and emails in order to put himself in power in the company, and now he has bigger plans. In the middle of one of his manic phases, Andre told Nessa — his new love interest — that his late wife was the one that used to pull him together when he was “like this.” Nessa said something along the lines of, “that’s cool and all, but you need to take responsibility for you.”

She’s not really wrong. I mean, Andre took this as Nessa not wanting him, but really, she was just trying to help Andre help himself. But, later, at a beach, Andre looked off into the sunset with Ghost Rhonda in his arms, and they agreed that it was time for her to go. First, though, Ghost Rhonda requested that Andre finish the job they started and make “the b*tch” that killed her and their baby (aka Boo-Boo Kitty) pay. Andre said, “Yeah, man, sure,” and Ghost Rhonda walked into the water wearing a white dress. Now, it’s on.

I’m still not 100 on how Andre even put together blackmailing Shyne to make it look like he was the one who helped the FBI freeze Lucious’ assets, leaving Lucious basically broke as a joke. But that’s what Andre did; he told Shyne that, in order for Andre not to snitch on him, he has to help him with his plans. The end of those plans involve eliminating Lucious from the picture. Now, I’m all for Lucious Lyon getting run over by a steamroller, Austin Powers-style, but he always knows what’s coming. Somehow, I don’t think this will go as well or as easily as Andre thinks.