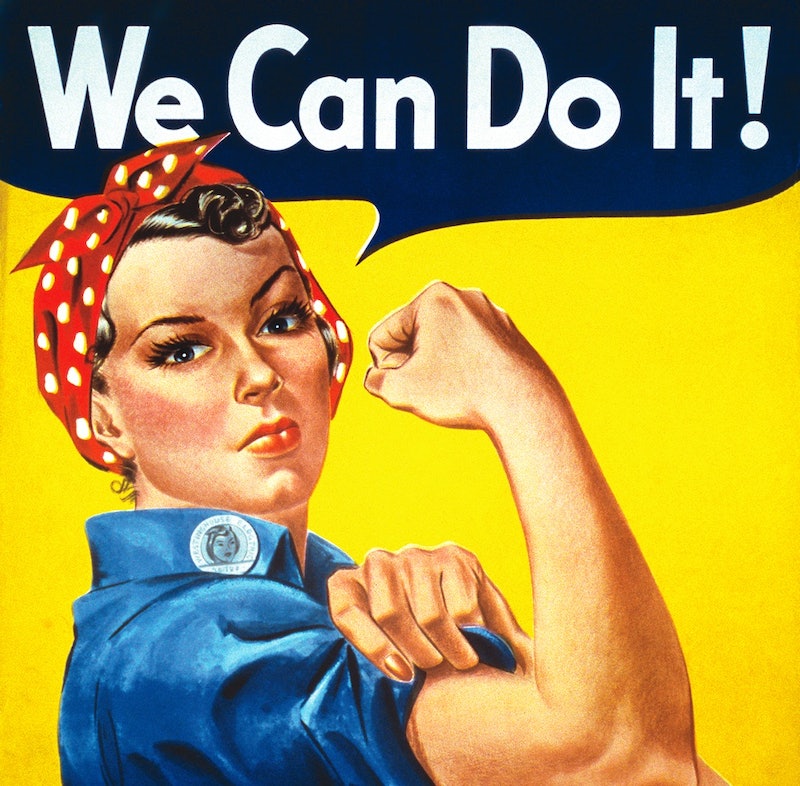 Now that the end of the year is approaching, it's time to figure out ways to make 2017 more feminist than ever. The new year is always a good time to start afresh, but it's safe to say that 2017 is going to bring even bigger challenges than usual as the United States transitions to a new political era. As far as equality has come in the last century, issues like the wage gap, objectification, systemic racism, and rape culture persist. Basically, 2016 made it clear that there's still a long way to go before all genders are truly equal.

On the bright side, feminists have risen to each challenge. This fall, Brock Turner's early release from jail after serving three months for convictions of sexual assault sparked an outcry from feminists across the nation. Women began fighting the pink tax and created a Pantsuit Nation. In June, the Supreme Court struck down Texas's House Bill 2, which would have severely restricted access to abortion in the state.

These are just some of the feminist victories that have taken place throughout 2016. It's going to be a challenging year ahead, but here are 11 ways, both big and little, to make 2017 your most feminist year yet.

Feminism and politics are closely intertwined, and if ever there was a time to start becoming politically active, it's now. There are plenty of places to start: Volunteer at a women's health clinic, join a protest, call your local representative about issues that are important to you, and so on. One organization that's making activism particularly easy is Daily Action Alerts, which connects users with local politicians every work day.

2. Keep Up With The News

To be fair, sometimes the news can get overwhelming when it's nothing but misery. But it's important to keep up with current events, so you can know where to focus your energies.

3. Compliment People On Things Other Than Looks

Particularly women, although it applies to everyone. Supporting other women is key to feminism; if we don't look out for each other, nobody else will. But because so much attention is paid to women's appearances, try to focus on other characteristics. Better yet, compliment their appearance and their personality. It doesn't have to be an either/or situation; the key word is often and.

You already know about the wage gap, but to reiterate: On average, white women make 78 percent that which white men make in the United States for the same work, and that gap widens significantly for women of color. One of the most feminist actions you can take is demanding equal pay for equal work.

Many marginalized people are in the same boat as far as the wage gap goes — or a worse one. Do what you can by patronizing their businesses or keeping an eye out for women artists, artists of color, LGBTQ artists, artists with disabilities, and more.

6. Include Men In The Movement

Although it was debated for several decades, gender equality is exactly that: equality. As such, men have a place in feminism (after all, the patriarchy harms us all), and you can make an effort to welcome them.

Protest aren't for everyone, but if you have the time and inclination, get involved in a protest for gender equality. There have already been a few in the wake of Trump's election, and the Women's March on Washington recently obtained a permit to demonstrate on Jan. 21.

The presidential election may have just taken place, but there are still primaries, city elections, and other ways to exercise your right to vote in 2017. (You can find a list of these elections here.) Don't fall into the trap of thinking your vote doesn't count — it absolutely does, especially in elections where turnout is low.

9. Think About Running For Office

Being anyone other than a straight, cisgender, white man in politics is incredibly difficult, but the United States has a serious problem with lack of representation, especially at the national level. Make Hillary Clinton proud and consider running for office, so you can directly influence policies on feminist issues.

Research has shown that women apologize far more often than men, and you've probably noticed this in your daily life as well. There's a difference between being polite and apologizing for taking up space, and if you catch yourself saying you're sorry constantly, you might fall into the latter category. Try to avoid saying "sorry" unless you're actually sorry.

11. Take Care Of Yourself

Finally, take care of yourself this year. You can't make a difference if you're running yourself ragged. Besides, feminism is partly about supporting people who need it — and there's no better place to start than yourself.

Want to have an awesome 2017? Then check out the "You IRL" stream in the Bustle App for tips on how to have the most empowering year yet.