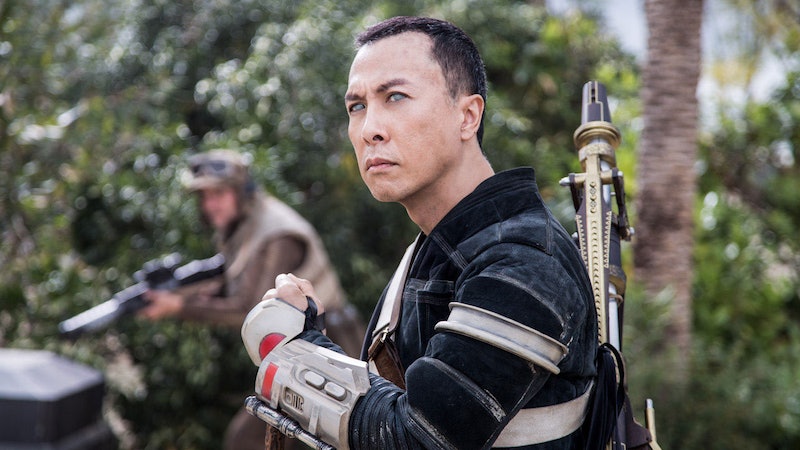 There's no chance of mistaking that the Force is present in Rogue One. Major Rogue One SPOILERS ahead. A little weaker and found in fewer instances than in previous installments, the Force can luckily still be wielded by a few characters, including Chirrut Imwe. But the real question remains: Just how Force-sensitive is Chirrut in Rogue One ? Next to Darth Vader, Chirrut is probably the most Force-sensitive character in Rogue One. While he is not a Jedi (the implication being the Force would be stronger within him if so), Chirrut is able to channel the Force to act as his literal compass in the world.

Destined to be one of the most iconic lines from Rogue One is Chirrut's mantra, "I am one with the Force. The Force is with me," which he chants when he is trying to center or steel himself as he enters into battle. The line is also indicative how just how Force-sensitive Chirrut truly is. This Force-sensitivity makes even more sense when you learn Chirrut is a Guardian of the Whills and a "deeply spiritual ... warrior monk," per the official Rogue One website. As a Guardian, he prevents the Kyber crystals (which naturally carry the power of the Force) from being misused by others; this would explain why he can sense Jyn in the crowded market, thanks to the Kyber crystal she is wearing.

Chirrut's role as Guardian and the sensitivity to Force-infused Kyber crystals invariably means that even though he is not a Jedi, he can use the Force when need be. Two notable times, aside from when he is able to wield a bow staff and take down dozens of Storm Troopers, include when he, Baze Malbus, and Cassian Andor are imprisoned by Saw Gerrera and Chirrut senses Bodhi Rook's energy from the cell next to theirs; Chirrut also invokes his mantra and uses the Force during the battle at Scarif, guiding him to the control panel where he flips a switch that helps Jyn transmit the Death Star plans to the Rebellion.

It's hard to misinterpret Chirrut's Force-sensitivity as anything else, and it makes him one of the most intriguing characters in Rogue One. Although he died a glorious death, there's no way he'll be forgotten any time soon.