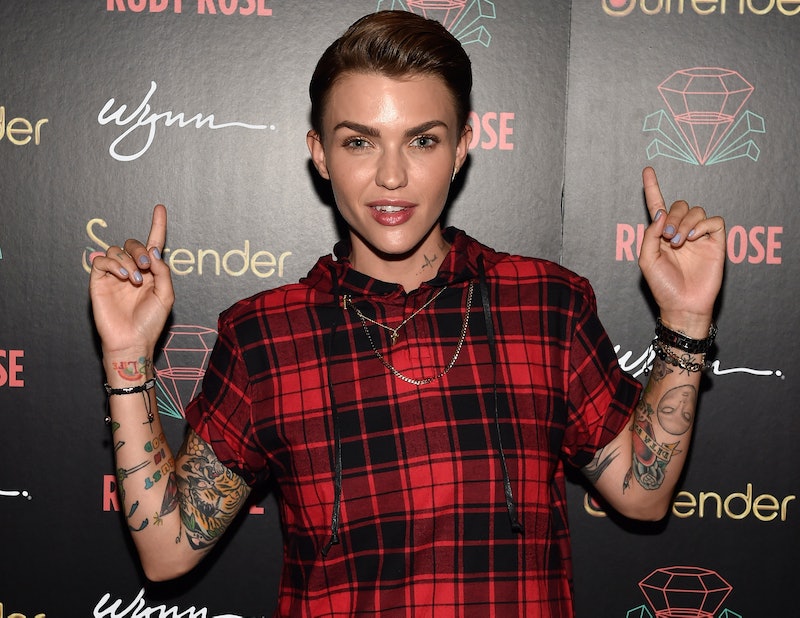 If you thought the rainbow hair color trend might have been fading away, you need to take a second look. Ruby Rose's new magenta hair puts that idea straight to rest. The Orange is the New Black actress is known for her bold style, where she breaks out of the confining box of gender norms, has over 60 tattoos, and has rocked green strands before. And seeing how she's become Urban Decay's newest face — helping them debut Vice lipstick shades that come in frosted purples and deep reds among a plethora of others — this new hair move doesn't necessarily come as a shock. She's definitely not afraid to go outside of conventional beauty standards.

Before this transformation she was rocking a short brown shag, so this colorful upgrade is definitely considered a shakeup from her previous look. According to Teen Vogue she debuted it on Instagram, using the help of her adorable dog. "Ruby, who first posed with her pup, and then took a solo shot of her new strands, has us totally convinced that Tiger Eye hair might be too tame come winter. Instead, we’re in awe of (and fully supporting) her decision to go about as bold as possible," Teen Vogue reported.

She nonchalantly debuted her hair through a photo that looked like it was just a snuggle shot with her dog, where the caption read "When your dog is comatose and you don't know where she finishes and your jacket starts." Rather than it being a "New hair!!" image, it was just her snuggled up on a couch with her white dog, wearing a fur coat indoors because that's what celebs do.

The next image finally touched upon the fact that she got a complete hair makeover, with a caption simply saying "Magenta." It was very, "Oh P.S., I now have lipstick pink hair in case you didn't notice." To which I think the whole Instagram world could respond "Oh, we noticed." While Rose has only had this hair for a few days, it's going to be exciting to see how she dresses it up for not only normal day-to-day wear but red carpet looks. While it might be all speculation now, we can be sure that it'll look bold and amazing.

More like this
Iris Law's Skunk Mullet Is Not For The Faint-Hearted
By Tomi Otekunrin
2022's Top Wedding Hair & Makeup Looks, According To Pinterest
By Olivia Rose Ferreiro
The Evolution Of Hair Highlights
By Danielle Sinay
Lily Collins Swears By This Product For Perfectly Air-Dried Hair
By Keely Weiss
Get Even More From Bustle — Sign Up For The Newsletter