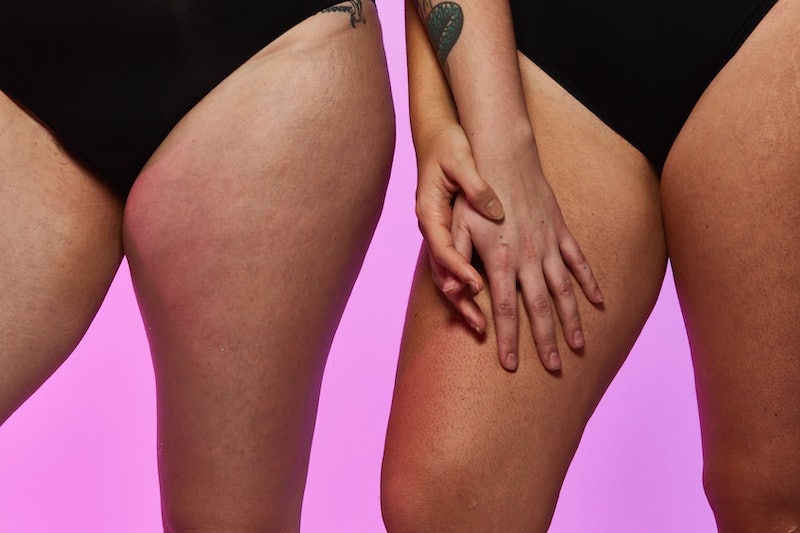 I don't even know what a holiday season looks like anymore without the talk of weight loss that inevitably follows the gift-giving, wine-guzzling festivities. Just as Christmas is sure to come every year, so are the subsequent advertisements promising to help me shed "the extra layer of fat" that has accumulated over the winter holidays. The media does of a great job of convincing me that I need to atone for all the pumpkin pie and baked brie, and that fitness and diet-focused New Year's resolutions are my ticket to a leaner, fitter body.

Almost half of the American population makes a New Year's resolution every time the year comes to a close, and the number-one resolution in 2015 was to lose weight, according to a study published in the Journal of Clinical Psychology. A Health and Healthcare study by Gallup in 2013 showed that 51 percent of Americans wanted to lose weight at any given time, even though less than half of them were taking any actions to shed the pounds.

In fact, a survey of Bustle readers showed that 41 percent of respondents were making New Year's resolutions to lose weight and exercise more.

As a result, in the early weeks of a new year, Facebook, Instagram, and Twitter turn from social media playground to weight loss journey central. My newsfeed is flooded with "inspo" before-and-after pictures of people's bodies. People share their weight loss progress, documenting everything from their daily workout regimen to their pant size to what the scale reads in the morning. The unnerving part is that the underlying attitude of these social media posts is one of positive motivation. All you have to do is decide to start today.

They're outwardly inspirational, but we have to start asking ourselves: Are these weight loss journey posts encouraging us in a healthy way? Or are they shaming us into rejecting our own physique? What role do they play in body positivity and self-acceptance?

Heather Monroe, MSW, LCSW, psychotherapist, licensed clinical social worker, and Senior Clinician at Newport Academy, believes these public displays of weight loss encourage you to be unhappy with the current state of your body. "When social media outlines weight loss journeys it serves to validate people’s insecurities," she tells Bustle. "It creates an inner dialogue that’s incredibly harmful and negative."

I know when I see other people experience drastic physical changes, I feel shameful for not taking the same route myself, and I feel a lot less beautiful. I then believe that the next year of my life would be so much better if I had just committed to the same weight loss programs that seemed to be helping so many people achieve their dream body. Monroe says it "also normalizes the belief of 'not enough,'" which can lead to destructive behavior and dangerously trigger those who struggle with eating disorders, which is probably why my binge eating disorder (BED) instincts kick in when I stop and stare at the "fitspo" posts, and I feel like eating all the leftover pie. Twenty million women and 10 million men in the U.S. will suffer from an eating disorder at some point in their lives, and the body dissatisfaction that contributes to these struggles can start at an early age. For example, up to 60 percent of elementary school girls are already worried about their weight.

Regardless of the upbeat tone that accompanies weight loss pictures in the New Year, these images could hazardously threaten millions of people's mental health, triggering them to make extreme changes in their diet and exercise routine in order to mirror what they see online.

Madeleine Wilson, 18, an alumna of Eating Recovery Center, a place that provides treatment for men, women, and children with eating disorders, speaks from personal experience when she tells Bustle that "there have been many times throughout my recovery when comparison with others has caused my eating disorder to flare up." Wilson recalls that weight loss or fitness journey pictures online have sparked a series of "should" statements in her head: "I should go on a diet" or "I should work out more."

Wilson says there's a time early-on in recovery when "self-awareness is little-to-none," which makes it nearly impossible to look at the before-and-after images without spiraling out of control and engaging in harmful behavior. Whether you're in battling an eating disorder or in recovery, these posts can be very toxic indeed.

Even for individuals who have never lived with an eating disorder, it's easy for our minds to immediately get stuck in comparison mode when we're bombarded with snapshots of people's fitness regimens and detox plans. Jenna Hollenstein, MS, RD, CDN, a certified intuitive eating counselor, tells Bustle these posts serve only as fuel to punish ourselves.

"Social media posts about getting thinner, fitter, and healthier have essentially the same effect on us as our inner drill sergeant," Hollenstein says. "They make us feel guilty and inadequate, which is the opposite of motivating."

Similarly, we get caught up in chasing goals that are purely physical, and if we don't reach these unattainable objectives — "flat abs" and long, lean legs — we beat ourselves up even more. "At this point we might react with 'f*ck it' behaviors like bingeing and not doing the types of physical activities that we actually like and give us pleasure," Hollenstein frankly points out. (Again, the pie.)

When we flip through the photos of other people's "progress," we often can't believe how quickly those women gained a six-pack by completely giving up carbs. The reality, however, is that drastic measures like these simply don't work. Ninety-five percent of people who put themselves on a diet simply gain all the weight back within just a couple years. It's not a sustainable way to treat the body.

We'd be wise to keep this in mind as the New Year photos rain down on us. Barrie Sueskind, MA, MFT, a Licensed Marriage and Family Therapist in Los Angeles, says we feel pressure to live up to an idealized image that doesn't even exist. "Most people post only the best, most beautifully edited version of their lives online, so it can look like everyone you know is happy, glamorous and successful," she tells Bustle. In other words, don't absorb those "after" photos as reality.

Sueskind says too much time spent scrolling through these kinds of social media posts can cause you to get "sucked down a rabbit hole," where you equate your self-worth with your weight and you believe you'll be happier if you were just a little bit thinner. When you get trapped in this kind of thinking, your emotional wellbeing could become compromised. Anxiety, stress, and low self-esteem become your companions, making you blind to your most vibrant qualities that make you invaluable to the people around you.

Americans spend more than $60 billion a year on fitness and diet related items, and we start dishing out the cash as soon as January begins. US News reported that the 24-hour gym franchise Snap Fitness signed up 100,000 members in January 2012, which was almost double the amount of people who joined in the previous August. The amount of advertising that weight loss programs spend at this time of year simultaneously skyrockets. In 2014, Weight Watchers aired 26 percent of their national commercials in January alone.

These companies make it all too easy to "pursue goals society tells you are important," Sueskind says, when we should instead focus on improving our overall health, which may not have anything to do with working out or dieting at all.

"The conversation needs to switch from the external to the internal," Monroe tells Bustle. Focus on how you feel when you exercise or eat certain foods, and let that be the guide for your lifestyle choices, rather than focusing on what you'll look like if you stick to a certain diet. "Eat the foods that feel nourishing and satisfying, do the activities that you enjoy," Hollenstein adds.

At the same time, how we use social media at this time of year is worth some serious consideration. As someone who has anorexia nervosa for a decade, Wilson says one thing that has helped her is to "avoid potentially triggering posts." She also urges us to remember that what might be healthy for one person isn't necessarily right for another, so we should perhaps "celebrate privately rather than publicize individual progress and potentially affect others negatively."

Because there is so much material to sift through when New Year's resolutions are in full swing, it might even be helpful to reassess your social media use altogether, especially if you want to hit the reset button and pave the way for a fulfilling 2017. "Do a newsfeed cleanse," Monroe proposes. Remove the news outlets and friends who trigger you to feel icky about yourself. Focus instead on the content of people's pages, and stick with the accounts that align with your values and motivate you in an affirmative way.

They say you're only as good as the company you keep. That rings just as true in the virtual world as it does in your everyday life, so choose to surround yourself with the kind of social media friends who will lift you up, rather than persuade you to change any elements of the magnificent person you already are.

More like this
25 Quotes About Love To Share During Pride Month 2022
By Madeleine Aggeler and Emma Garza
Bustle Newsletter: May 26, 2022
By Stephanie Talmadge
The 4 Best Vacuums For Shag Carpets
By Jessica Resendez
40 Mistakes You Don't Realize Make Your Home Look Sh*tty But Are Actually Easy To Fix
By Julie Peck
Get Even More From Bustle — Sign Up For The Newsletter