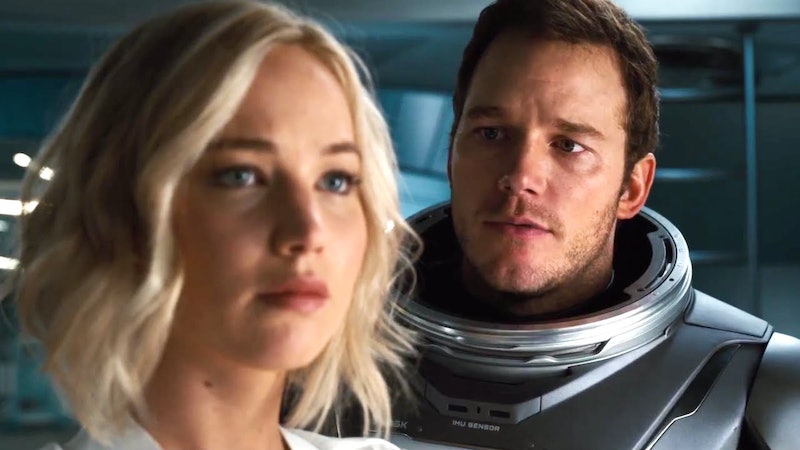 2016 hasn't been an easy year, so I don't blame you if you've fantasized once or twice about abandoning Earth like the characters in Passengers. Jennifer Lawrence and Chris Pratt play Aurora and Jim, two humans who book passage on a space cruiser heading to another inhabitable planet. They're meant to remain in stasis for the majority of the journey so that they can awaken and begin a new era of their lives in another corner of the galaxy. But a series of unfortunate events and even more unfortunate choices interrupt their peaceful trip. Still, it's exhilarating to think that one day humans may be able to make an intergalactic move. When might that day arrive? Well, it could be a starting point to know how far in the future Passengers is set.

Unfortunately for clarity's sake, Passengers never places itself specifically in time. There's no title card to tell audiences what year the characters are in and no dialogue mentions it. The filmmakers wanted to keep the timeline vague, and I can understand why. If there's no benefit to randomly choosing a year, then it's best to leave that information out completely. What is made explicit is that the trip itself is meant to take 120 years and that Aurora and Jim wake up with 90 years left to go.

Just like in literature class, it helps to consider the context clues in Passengers. The circumstances of the journey can help determine when the action takes place. The Starship Avalon isn't the only spacecraft of its kind. And Jim and Aurora are not in the first group of travelers to ever attempt long-range space travel like this. Passengers happens far enough in the future that civilian voyages to other solar systems are not only possible, they're relatively routine. That means that the companies that facilitate these trips must also be confident in their ability to keep their guests asleep and alive for longer than a normal human lifespan. (Obviously, there are some kinks to work out here.) The science of it all is pretty staggering. So it seems highly unlikely that anyone alive now will see this kind of travel in their lifetime.

That said, you can purchase your seat on a future civilian space flight right now if you have $250,000 lying around. Virgin Galactic is a division of The Virgin Group and is accepting application from "Future Astronauts." The goal of the company is to provide safe and comfortable leisure trips for curious passengers. No official journeys have taken place yet or are even scheduled. Virgin Galactic is still in the testing phase. Once operational, Virgin Galactic is only offering commercial suborbital trips — a far cry from a relocation to another planet. And even those flights are still a few years off.

If the harrowing flight of the Avalon has turned you off to the idea of leisure space travel completely, there's no reason to fear. Humans have not yet made the advancements necessary to enable a trip like this and are unlikely to do so within the next century. The future is a scary place in Passengers, even if Chris Pratt is there.