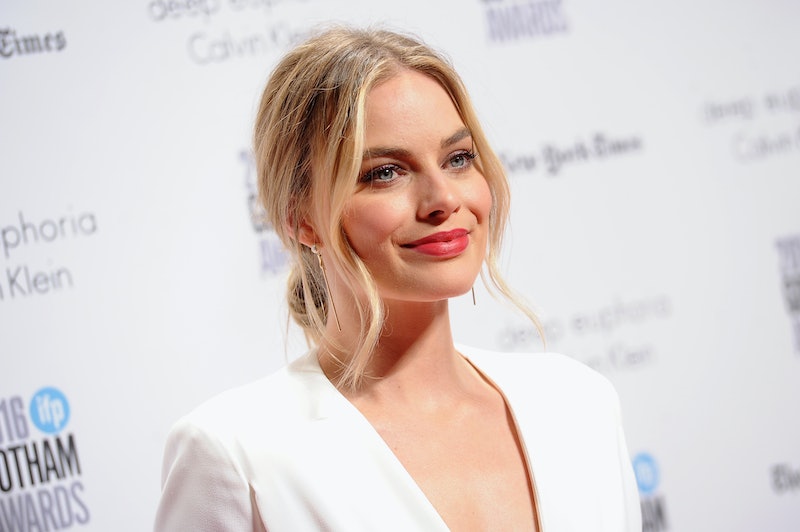 If you haven't heard the news yet, Australia's The Daily Telegraph reported Monday that Margot Robbie married Tom Ackerley in Byron Bay, Australia on Sunday evening. The news comes as quite the surprise, especially since they never even announced they were engaged. The couple has yet to confirm the news, and Bustle has reached out to Robbie's rep for comment, but did not receive an immediate response. If you're looking for some type of proof of their nuptials, then you're probably hoping for photos of Margot Robbie's wedding. Unfortunately, that's not going to happen just yet.

Based on their alleged secret engagement and their rumored stealth wedding, it's not shocking to learn that there are zero photos of their big day. At this point in time, pictures do no exist. That's not to say images won't surface online in the near future or they won't share any themselves, but as of Monday, Dec. 19 there aren't any.

Robbie, Ackerley, or any of their family and friends who were reportedly in attendance at the alleged wedding haven't shared photos, either. Though, there are a few images on Instagram that might be clues that the couple did actually indeed say "I do."

In a photo with Robbie's brother Cameron and four women posted on Instagram Saturday, who People reported may or may not be friends of the Suicide Squad star, the caption reads, "The calm before the Summer storm." That could very well be hinting at a wedding. Ackerley's brother James also shared an Instagram Sunday tagged at Harvest Newrybar, which People reports is a popular wedding venue in Byron Bay.

As of Dec. 19, the latest photo Robbie shared on Instagram is the above one showing her with a huge smile and a delicious drink in her hand. This photo was posted on Dec. 16, so either The Wolf of Wall Street actor was really excited about that purple drink or this was her way of celebrating a few days before reportedly tying the knot with Ackerley.

Who knows if or when photos of Robbie and Ackerley's supposed wedding will pop up online, because they seem to like to keep things private when it comes to their relationship. Basically, they will probably share photos of any special day they may have had on their own terms.

More like this
Kim Kardashian Joked That Her Wedding To Kris Humphries Was A “Gay Wedding”
By Jake Viswanath
Britney Spears Set A Wedding Date With Fiancé Sam Asghari & Previewed Her Dress
By Bustle Editors
JoJo Fletcher & Jordan Rodgers Got Married In A “Playful & Fun” Wedding
By Grace Wehniainen
Is Megan Fox Pregnant? MGK Gave A Shout-Out To Their “Unborn Child” Onstage
By Hugh McIntyre
Get Even More From Bustle — Sign Up For The Newsletter