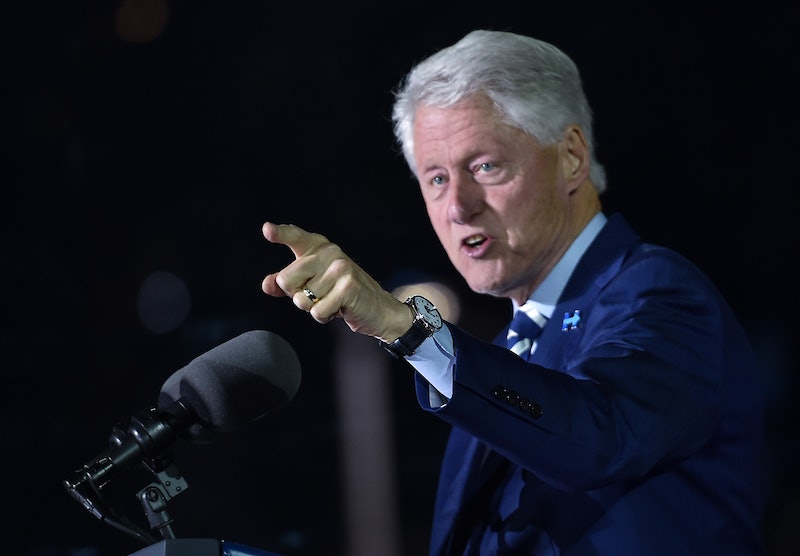 The day of the Electoral College vote had finally come, and after weeks of discussions and revelations and people writing to their electors encouraging them to not vote for President-elect Donald Trump, everyone was waiting to see what will actually happen. On Monday morning, the electors in New York gathered in the statehouse in Albany, and there were some familiar faces among them. Besides Gov. Andrew Cuomo, New York City Mayor Bill DeBlasio, and 27 other New Yorkers, Bill Clinton cast his Electoral vote for Hillary Clinton.

Earlier in December, Clinton spoke to a local New York newspaper about Trump. He told reporters that Trump "doesn't know much," but "one thing he does know is how to get angry, white men to vote for him." In the election, Clinton lost the vote of the white, working class in key states like Pennsylvania, Wisconsin, and Michigan, which ultimately led to her defeat.

After casting his vote for his wife, saying, "I've never cast a vote I was prouder of," Bill talked to reporters about Hillary's defeat in the general election. He spoke of the drawn-out public arguments over her email server and how determined she remained through it all.

You know, I’ve watched her work for two years. I watched her battle through that bogus email deal, be vindicated at the end when Secretary Powell came out. She fought through that. She fought through everything. And she prevailed against it all but at the end we had the Russians and the FBI deal and she couldn’t prevail against them. She did everything else and still won by 2.8 million votes.

It's a very sweet sentiment that speaks to Hillary and Bill's support for one another. Unfortunately, it still wasn't enough to win the election. Too many Americans were influenced by the "corruption" they believed was proven by the email scandal, as well as Trump's bombastic language, interpreting it as just telling it like it is (even if that meant spreading lies).

It's still a difficult thing to accept that Hillary won by so many popular votes but can still be defeated in election because of the Electoral College. Many of her supporters (and Trump detractors) had campaigned for Republican Electors to go against their party's wishes and not vote for Trump. However, many electors refused to turn against Trump and therefore it looks like Trump will officially be named President when Vice President Joe Biden presides over the counting of the votes on Jan. 6.

America, it seems, voted for Trump, and we'll all have to grapple with that, and work even harder to protect American freedoms and rights we've worked so hard to get already.