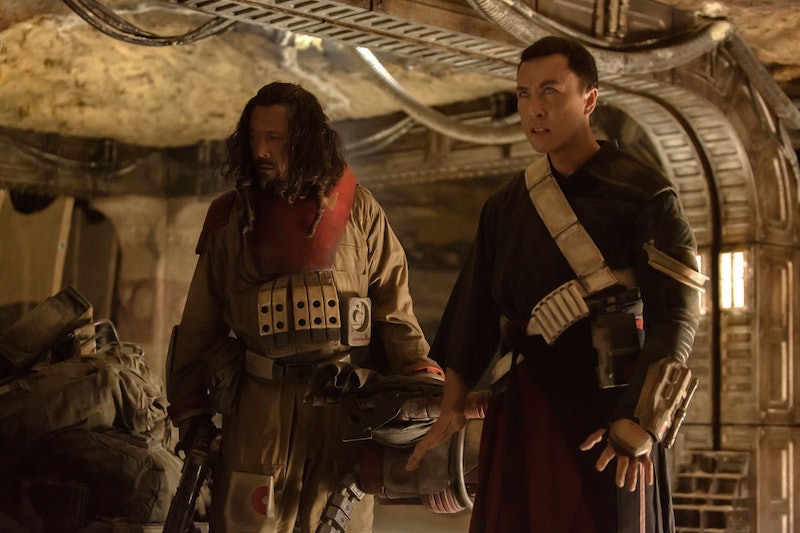 Yo, FinnPoe, I'ma let you finish, but Rogue One 's Chirrut and Baze might be the first gay Star Wars couple ever to be featured onscreen. Introduced as protectors of the Jedi Temple on Jedha, Chirrut Îmwe (Donnie Yen) and Baze Malbus (Jiang Wen) are warriors who can fight when it is deemed necessary. And, while Chirrut goes wherever the Force guides him, Baze (who doesn't believe as strongly in the Force) pretty much goes wherever Chirrut goes, as he is the blind warrior's sworn protector. The duo join the Rebel crew of Rogue One early on, and though their relationship is never explicitly romantic, fans were quick to assume that Chirrut loves Baze and ship them as a couple.

The official Baze bio on the Star Wars website calls Chirrut "his best friend and moral compass," but as far as fans are concerned, Baze and Chirrut are soulmates who found love in a hopeless galaxy. In Rogue One, the duo are inseparable. No matter how many people are shooting at them, or how much Baze might protest, where one goes, the other follows. Baze and Chirrut's constant companionship, care for each other, and clear partnership both on and off the battlefield makes it not only easy to ship Baze and Chirrut as a couple, but encourages it.

With their adorable bickering, Baze and Chirrut certainly sound like a couple. And, Chirrut's mantra — "I am one with the Force, the Force is with me" — which Baze repeats could easily be interpreted as their own version of "I love you." But it's the pair's final moments that really seal the deal. Spoilers ahead. During the final battle on Scarif, Chirrut sacrifices himself for the Rebellion and dies in Baze's arms, and, for the first time in the film, Baze begins to recite Chirrut's mantra. It's a tender and heartbreaking moment, made only more poignant when Baze, reciting the mantra, charges forward to meet his own death moments later. If you didn't think Baze and Chirrut were a couple before, you probably do now. And the fans noticed.

Baze and Chirrut's ambiguous relationship has already inspired a great number of thinkpieces, such as Vulture's "Are These the Gay Star Wars Characters We've Been Looking For?," and fans are running with it whether it was intended or not. Baze and Chirrut fanfiction is on the rise, as are memes and fan art on tumblr and other fan sites.

It's unlikely that the Star Wars powers that be will ever confirm or deny Baze and Chirrut's relationship status. Though fans will get to learn more about the characters in Rogue One: Baze & Chirrut, a planned novelization of their story, the book is, according to Wookieepedia, middle school level, which makes any explicit romance seem unlikely. Rogue One director Gareth Edwards left the door open for multiple interpretations of Baze and Chirrut's relationship in a recent interview, however. "I don't mind people reading into [Chirrut and Baze's relationship]. I think that's all good," Edwards told Yahoo! Movies, via Movie Pilot.

I think I speak for all Chirrut/Baze fans when I say that, unless we get a flat-out denial, we'll be shipping Chirrut and Baze until the end of time.