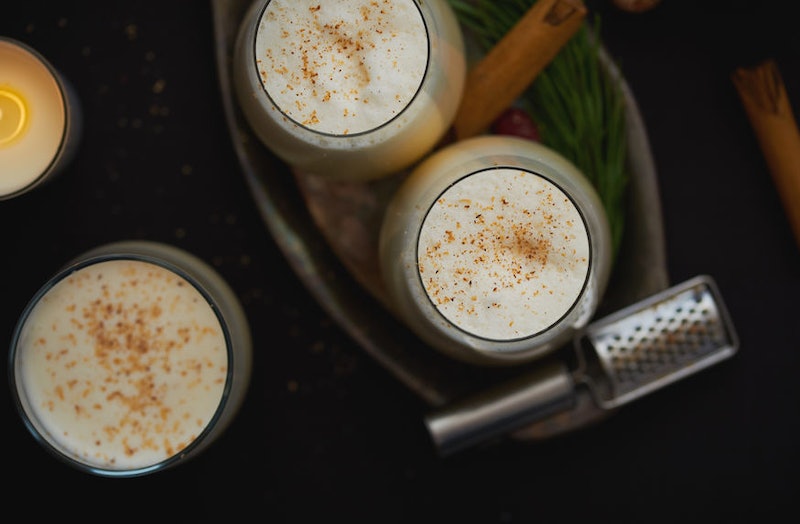 You've heard jokes and have seen memes on Facebook about people loving it (or maybe even truly, truly hating it) but you might not know that much about it — and that's OK. But, you're asking yourself the seasonally-appropriate question of "what is eggnog?" just know that you're not alone. As a child, you probably figured it was mostly raw eggs, because that's exactly what it sounds life. But as an adult, who is actually consuming this stuff, you may have no clue.

The first thing you need to know is that eggnog is a seasonal drink. Obviously you can make eggnog whenever you darn well please, but it definitely has a "season" — and that season is winter. Manufacturers usually start making it in October, wrapping up production by the time the new year gets here. People notoriously sip eggnog on Thanksgiving and Christmas — and more the latter than the former.

Eggnog can be alcoholic and non-alcoholic — obviously the stuff you find at your typical grocery store isn't boozed up, but you can always add your own later. Store-bought eggnog also typically doesn't include raw eggs, because while people have eaten them before with no problem, you definitely want to err on the side of caution. (Hey, nobody wants to get food poisoning on Christmas. Even if you really want to avoid a family party.)

When making your eggnog at home, you can sub a few types of alcohol in — but rum, brandy, and/or whiskey usually work best. (Especially the last two, since it'll give your eggnog a certain, strange sense of winter coziness.) Alcohol aside, most recipes include milk, cream, sugar, cinnamon, and of course, eggs.

If you're looking at the list of ingredients and silently gagging — yeah, that's why a lot of people are turned off of eggnog. But trust me, if you've never tried it: these wacky components work surprisingly well together.

In short, eggnog is definitely worth a try — but if you've got a sensitivity to raw eggs (or booze) you might want to celebrate by picking up a carton at the grocery store. Since it's a pretty filling drink, it's usually best enjoyed slowly, and in the presence of friends and family.