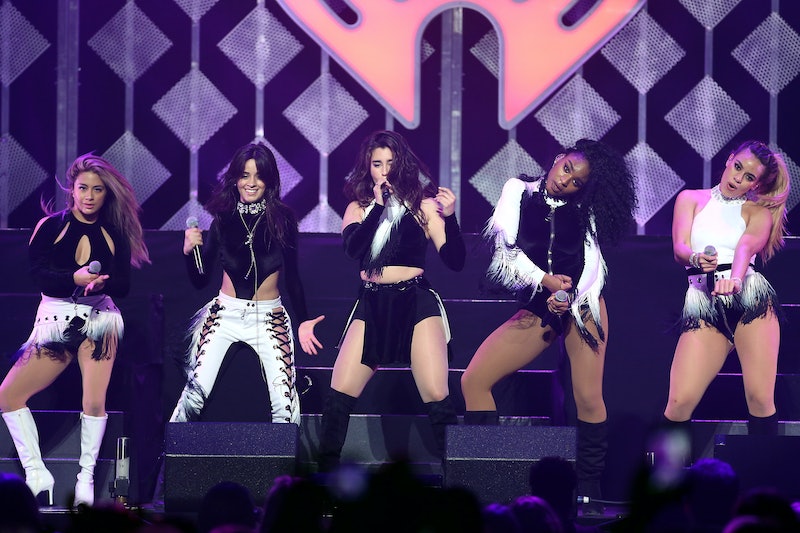 Fifth Harmony fans, or "Harmonizers" as they are called have certainly not been living in harmony the past few days as the band announced Dec. 18 that Camila Cabello would be departing Fifth Harmony, leaving the group of five and making it a group of four. Many fans have been devastated by the breakup of the young girl band who came together almost five years ago on The X Factor. But on the bright side, their sadness has been expressed in some of the best Fifth Harmony memes about Cabello's departure. Silver linings, guys, they're everywhere.

The remaining members of 5H — Ally Brooke, Normani Kordei, Dinah Jane, and Lauren Jauregui — broke the news by way of the band's Twitter claiming that "After [four] and a half years of being together, we have been informed via her representatives that Camila has decided to leave Fifth Harmony. We wish her well." Since then, Cabello has made her own statement, claiming that she "was shocked to read the statement the Fifth Harmony account posted without my knowing.... saying that they were just informed through my representatives that I was 'leaving the group' is simply not true."

There's definitely some miscommunication going on, but again luckily the fans are great at communicating their feelings. The following are some of the best memes that express fans feelings.

1. The One Who Used Creative Means To Express Their Feelings About Camila Cabello

2. The One Who Saw The Bright Side

Not one, but two albums full of catchy hits. Nice.

3. The One Who Went Straight To The Wikipedia Page

That Wikipedia page is hard for all of us to see right now. Maybe Wikipedia should just take it down for the day in memoriam.

4. The One With The Theories

Is getting left hanging one too many times grounds enough for quitting a band? Just maybe.

5. The One Who Knew There Would Be Ugly Cries In Their Future

6. The One Who Tried To Couldn't Help But Remember The Good Times

7. The One Who Said It Best, And In Portugese

Translates to (according to Google) "how I'm feeling, and how I'm going to feel every day, weeks, months, years, to the endlessness of this news." Fifth Harmony love and now Fifth Harmony sads transcend all cultures!

8. The One Where Camila Cabello Is Already Cut Out Of The Picture

It's almost as if she was never even there! But the heartbreaking thing is, she was.

9. The One Who Had No Idea What Was Going On

This isn't the time, non-believers.

10. The One Who Brought Christmas Wishes Into It

11. The One Who Remembered The Good Times

At least we'll always have this gif. It's the little things, guys.

12. The One Who Isn't Taking Any Nonsense From Other Fans

It's important to stay strong about one's Fifth Harmony beliefs.

13. The One Who Compared The Whole Thing To One Direction

Sometimes comparisons make everything seem a little easier to understand.

Fans may never know exactly what went down with the women of Fifth Harmony, but what they do know is that the whole thing has led to some of the best Twitter reactions. This is just proof yet again that no matter how dark things seem, at least fans can turn to the internet to express themselves.