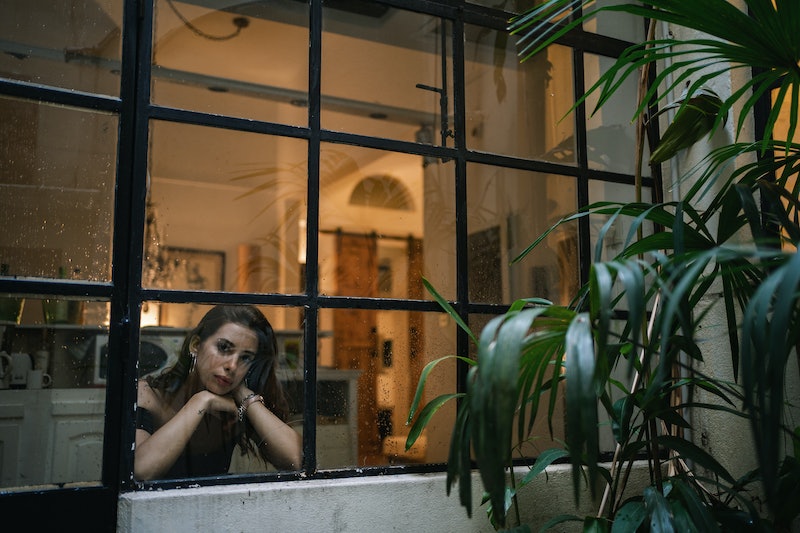 It's been a long, hard year, so you're probably looking forward to spending some restorative quality time with your family over the holidays. But then you wind up having to deal with that guy, and the time you were looking forward to is nearly tanked. To save your next trip home, it's worth knowing how to deal with misogynistic family members ahead of time. Unfortunately, most of us have at least one hidden somewhere in the family tree. The good news is that when you see them coming and can anticipate how interactions with them might go, it diminishes their power to inflict harm — intentional or otherwise.

The trouble with misogyny is that it's often the slightly more covert cousin of sexism. Unlike sexists, who are loud and proud with their silly superiority complexes, many misogynists don't even realize how their hatred for women is manifesting in their behavior. According to some experts, misogyny may be an"unconscious" hatred formed early in life. It might begin with a perceived hurt caused by a woman they trusted; it might be the result of witnessing others displaying misogynistic behavior and learning from it; it might be both; or it might be something else entirely. But once the seeds of a misogynistic viewpoint are planted, they can take root and blossom over time, resulting in the subtle targeting of women with pointed language, controlling behavior, and other misogynistic hallmarks. People of any gender can be misogynists, too, so it's not just limited to an "us vs. them" mentality between men and women.

So before the person fitting that description in your family starts in during board game night or holiday dinner, here are a few ways you can deal.

Of course you don't have to sit through some misogynist's insufferable remarks all night long. And since they may not even realize they're being offensive, it makes sense to call their attention to it with a subtle response like, "Hey, your sexism is showing. You might want to do something about that." Then change the subject. No matter how steamed you may feel, it's worth noting that name-calling or getting defensive will likely lead nowhere good fast.

2. Try to Have a Thoughtful Discourse

If changing the subject was a fail and the misogynistic family member (or members, bless your soul) want to engage, try a tact known as "threading the needle." In other words, you'll want to navigate the difficult topic as skillfully as you would a piece of thread through the eye of a needle. Don't just disagree with misogynistic points of view — invalidate them. Offer sound arguments that disprove the crux of their argument. The calmer, more intellectually, and more willing you are to engage in conversation, the harder it will be to argue with your logic.

3. Appeal to Them on a Personal Level

Sadly, you can't always (or often) deal in logic with misogynists. They'll simply roll their eyes and accuse you of being shrill or call you something ludicrous, like a "femi-nazi" (so original, bruh). If this is the corner you find yourself painted into, you might try to appeal to them on a personal level. It's not uncommon for misogynistic viewpoints to be couched in, "Oh, but you're different because I know you" reasoning — so if they something demeaning to women while trying to tell you you're the exception, you can explain to them that their comments are hurtful to all women, including you.

It's problematic that we're still at a point in our cultural development where it's necessary to relate hurtful behavior directly to the person displaying it in order to stop it; it's been said before, but "How would you feel if that was your sister, your wife, or your mother?" shouldn't be needed in order for someone to treat someone else like, y'know, a human being. But while we're still trying to change things for the better, it can sometimes help in the meantime to humanize the argument enough to get them to back off. At the very least, they'll hopefully have a sincere desire to stop hurting a person they love. Otherwise, you aren't just dealing with a misogynist — you're dealing with a dillhole, to boot.

Fortunately for me, I have a very large family full of strong, outspoken women. Finding a relative who will back my play when it comes to dealing with a misogynistic family member isn't hard. In any case, try to find an ally in the family with some pull. If you stand together with someone (or with more than one someone) who reinforces your perspective... well, that old saying about there being safety in numbers helps out.

Should all else fail, just walk away, my friend. Push your chair beneath the table and find a seat somewhere else. We don't get to choose who our family is, but we sure as hell do get to choose whether or not we spend time with them. If a family member is exhibiting unhealthy attitudes toward women and refuses to let up, simply remove yourself from the equation and let them stew in their own hatred. You've got better things to do, like beat your brother at Monopoly for the 7000th time.

More like this
25 Quotes About Love To Share During Pride Month 2022
By Madeleine Aggeler and Emma Garza
Sandra Bullock, Girlboss Extraordinaire
By Matt Harkins & Viviana Olen
Meet The Spice Company Founder Who Sees Chai As A Metaphor
By Madhuri Sathish-Van Atta
Are Gemini & Cancer Compatible In A Relationship?
By Kristine Fellizar
Get Even More From Bustle — Sign Up For The Newsletter