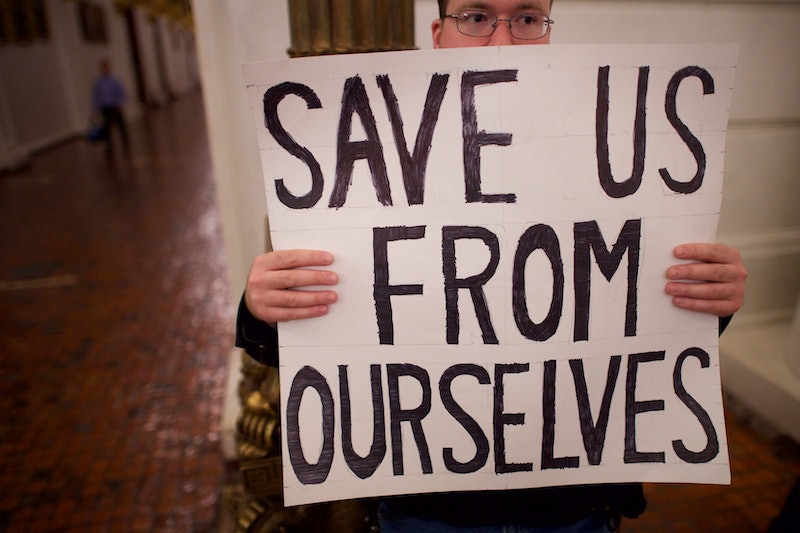 Now that the Electoral College has voted, there is no more ambiguity — Donald Trump really will become president on Jan. 20. But for some of his opponents, even if he is officially the president of the United States, he will never be one they can support, or even legitimize. The #NeverMyPresident hashtag has been trending on Twitter since the electoral vote was completed and the last vestiges of doubt about Trump's impending inauguration disappeared.

Of course, Trump's opponents can and should say whatever they want on Twitter (or anywhere else). In this country, it's easy to say whatever you want about the government and its legitimacy, and just as easy for people to ignore whatever you say. But if you're going to use the hashtag, it's important to understand the full scale of what that could mean.

The idea behind #NeverMyPresident is clear: Through various unique circumstances, such as Trump's loss in the popular vote, concerns that the Russian government sabotaged the Clinton campaign to get him elected (concerns, I may add, that the CIA and FBI have affirmed), and potential Constitutional violations due to Trump receiving payment from foreign governments, Trump has rightly lost — or rather, not earned — the faith of many Americans. And it's becoming clear that even beyond the hashtag, there is a significant portion of the country that will not support Trump no matter what.

But for this kind of hashtag activism to be effective, "never" has to really mean never. If you want to deny Trump the kind of power to enact his agenda, a social media post won't be enough. The only thing that reigns in the power of the president is other people in the government refusing to cooperate. And the best way to stop politicians from helping the president is to ensure there will be consequences when they do.

There are ways to do this. Some progressive activists and former Congressional staffers have prepared a guide how to put pressure on individual members of Congress, based on forcing them to deal with the people who could be affected by Trump's policies and fear they'll lose their jobs if they support them. These tactics can work — the guide is based on the success that the Tea Party had in opposing Obama's agenda. But they also require activism that goes well beyond posts on social media. They require direct action and interaction with local representatives that force them to listen.

What people using this hashtag have to also understand is the true dark side of this kind of opposition. While dissent has always been an important part of American politics, the tenor of divisions in the country have become upsetting. The dark mood of the 2016 election suggests the long-term effect of movements like the Tea Party, which treat any cooperation with the democratically elected president as borderline treasonous.

We're now entering a situation where a large portion of Americans see their own president as the most dangerous enemy of the state — often more than foreign dictators. There are real reasons to be concerned about Trump, and I cannot dispel or belittle this fear. But it's that same sentiment that Trump espouses, that the enemy is other Americans. It was scary when this feeling entered our politics during the Obama years. Trump's opponents should be prepared for the darkness they are facing to consume them as well.