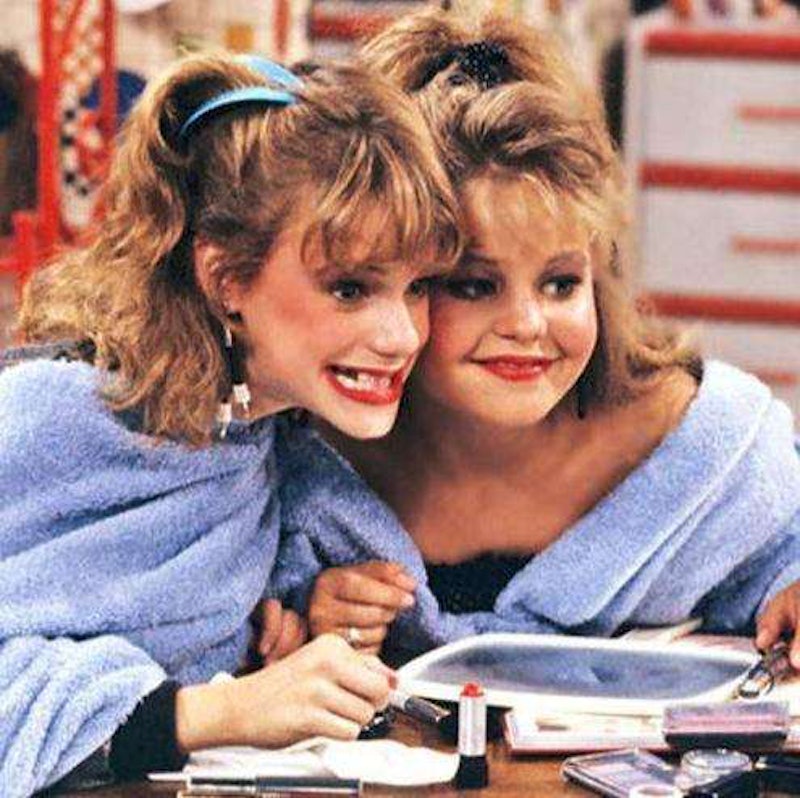 There were a lot of things you used to do better, including friendship in the '90s. That's not to say the way you're doing friendship now is wrong, it's just that there were things that were inherent to the '90s that made your friendships better. Many of those things, like your youth, scrunchies, and perfect R&B, just can't be bought back or replicated now. There was just something about actually talking on the phone, back combing each other's bangs, and spending Saturday nights trying "Light as a feather, stiff as a board" for hours on end that was really magical. Not that texting your friends creative emoji combinations and screenshots of Kylie Jenner's Instagram isn't magical now, it is —just not as magical.

Nineties kids make better friends now because of our experiences with friendship through '90s. Sure, you there were things you did differently with your BFF in the '90s, but you've learned and borrowed from those things you become the wonderful friend you are now. And you probably often look back at the halcyon days of the '90s with a fondness for the way you carried out your friendships with so much innocence and enthusiasm. Here are eleven reasons why friendship was better in the '90s.

1. You Modeled Yourselves On The Gang From Now & Then

There are no girl gangs any more that are as cool as the gang from Now & Then (not trying to make women compete, just stating FACTS). Modeling your friendships based on the Now & Then gang rather than Taylor Swift's squad or the Kardashian-Jenner clan makes '90s friendships so much better.

I mean, sure, you cancelled plans, but never at the last minute. Plans involved many phone calls, meticulous planning, and when the day came, you couldn't just send a lazy text to get out of it. You went along with what you'd discussed because there was literally no way to get out of it — and you always ended up having a blast with your pals.

3. You Talked On The Phone For Hours

So much is lost in translation over text, and let's face it, a conversation can take so much longer to have, and misses all the wonderful intonations you get from a voice chat. In the '90s you'd talk for HOURS on the phone and it was amazing.

4. You Wrote Elaborate Notes To Each Other

As well as the art of actual conversation, you perfected the art of letter writing. And glitter bombing, because it wasn't a proper '90s friendship if the envelopes you passed notes in weren't filled with sparkles.

5. Everything Could Be Solved With Love Math Or Cootie Catcher

You and your friends were able to help each other through problems and with questions so much easier in the '90s. All it took was a calm friend to consult with a cootie catcher, or do some love math for you, and all your troubles would be washed away.

6. You Printed Out Photos And Made Giant Friend Collages

When was the last time you printed a photo? That's right, the '90s, when you printed EVERY photo, and spent hours cutting out and arranging them in just the right way to create giant friend collages for your bedroom wall.

7. You Spent Face-To-Face Time Actually Looking At Each Other And Not At Screens

8. You Tried All Kinds Of Dumb Stuff Together Just To See If It Would Work

Like putting lemon in your hair and laying out in the sun so you could be blonde. Or "Light as a feather stiff as a board". Rather than just Googling stuff, you and your friends would try out all kinds of wacky crap just to see what would happen, and have so much fun in the meantime.

When you and your friends took a photo, that was the photo you got. You wouldn't spend hours taking and deleting selfies to get the right one. As a result, you got some pretty funny (and more realistic) memories.

10. Your Fights Were Confrontational

11. You Had Actual Fashion Shows To Choose Outfits

Instead of modeling in front of your mirror and snapping selfies to send off to various friends for approval, all your friends would come over and help you stage an epic fashion show (montage style) to help you choose an outfit.