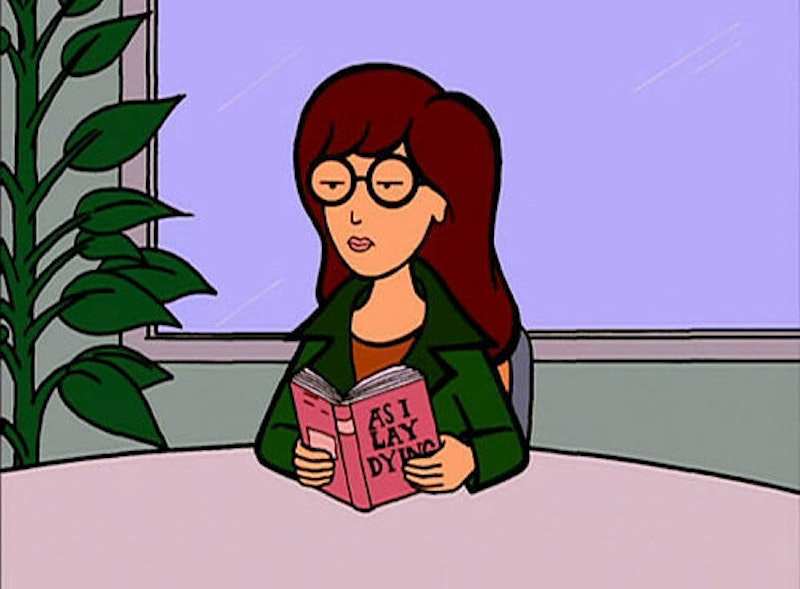 Sometimes when you were acting apathetic in the '90s it was really just so you could look cool. You weren't always as apathetic as you were pretending to be, but prescribing to the whole apathy genre was a source of instant cool, so you flicked your hair and says "who cares" to a whole bunch of stuff you maybe even secretly cared about. You did like/pretend to like some things: Richard Linklater and Kevin Smith movies, Camus, drinking chain store coffee ironically, Ethan Hawke, grunge music. But even when you liked things, it was without enthusiasm. Your '90s apathy was all about having a poker faced ability to never seem excited, and always seem like you were doing things grudgingly, accepting the things around you rather than welcoming them.

You modeled yourself on your hero Daria, although you probably couldn't always get the quick-witted acerbic sarcasm just right (it's OK, you're only human). Your style in the '90s mimicked your general disinterest in the world around you, and you got around in flannels and ripped denim, the height of cool (which are, weirdly, always the height of cool). Ironic, because in trying to look apathetic you were really not being apathetic at all. From rejecting consumerism to pretending you didn't like the Spice Girls (we knew you were lying — everyone liked the Spice Girls!) here are 12 things you acted apathetic about when you were trying to look cool in the '90s.

The girlie, Girl Power, mini-skirt clad, giddy, loud, joyful Spice Girls didn't exactly reflect the apathetic veneer you were trying to sell in the '90s. So you pretended you didn't like them. No one would ever know you danced around to "Say You'll Be There" late at night in your room alone.

2. How You Carried Your Outerwear

You wanted to show how little you cared about appearances when you were being apathetic in the '90s, so when you had outerwear you weren't wearing, it didn't get folded neatly over a handbag or carried gently in the crook of your arm — you tied it around your waist. And sat on it. Because you didn't care.

3. The State Of Your Fish Nets

Or tights in general. True apathy came in wearing tights with holes and rips in them, and acting like you couldn't give a tiny rat's ass. It was very Courtney Love.

You didn't care about shopping, man. You weren't some drone that got brainwashed into spending on unnecessary items. You bought things from thrift stores, and only went to fast food joints ironically.

You were a curated mess. To show how apathetic you were, your tussled, unbrushed hair would top a thrown-together-from-the-bedroom-floor outfit. Even though you totally showered every morning, in an attempt to look cool, you'd attempt to appear as disheveled as possible. Laundry day? Didn't need it!

Friends? That was some sappy crap for mainstream people who cared too much. You were into Daria and Beavis and Butt-Head, and anything else on MTV that was either stoner-y or promoted the generation's IDGAF attitude.

Your ultimate #HolidayGoals were things like "backpacking in Nepal" and any following any of Lonely Planet's shoestring guides. You wanted to go to places and stay up all night talking with a stranger so you didn't have to pay for accommodation, like in Before Sunrise. You'd be ashamed of your adult self who covets Kardashian-style holidays on Instagram. That's not cool, man.

With yet more thanks to Ethan Hawke, you preferred to bill yourself as the lovable loser type. You didn't care about money! That was just capitalism's way of enslaving you. You'd live hand-to-mouth if it meant being anti-establishment cool! Obviously you didn't realize about things like rent and bills yet, but you thought it was cool and kind of anarchist to not care about your future finances.

Taking a leaf out of the 10 Things I Hate About You play book, you didn't give a hoot about the social occasions you were supposed to be conditioned to care about. You were a true rebel.

You loved reading epic philosophical books — but didn't care for mainstream education. It was cool to be apathetic about institutional education because REAL education came from what you learned out in the world. Mostly it was just a good excuse to not take your homework seriously.

Valentine's Day? Spew. Don't care. You heard it described as a hollow "Hallmark Holiday" so you went with that. Not worthy of you "caring" about. Next.

As though you were in a perpetual Kevin Smith movie, you were always sipping on giant cups of soda and eating burgers, because you didn't care so much it didn't matter what you ate!