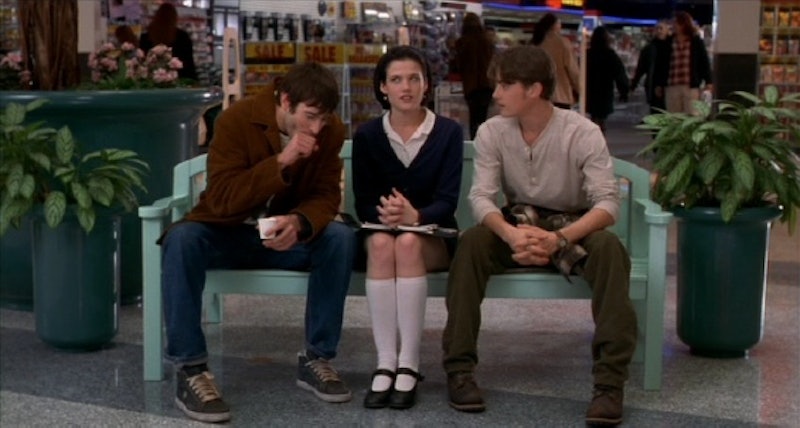 The '90s was a dynamic time, and there were lots of different types of '90s feminist you could be. Feminism is much the same these days: you're probably characterized by the thing you believe in the most. Intersectional feminism is currently on the rise, as is the Lean-In school of economic feminism, as well as Branded Celebrity Feminism. Of course, all feminists should be, ideally, working towards the same goal — equality for all women regardless of what "type" of woman they are, across all sectors of society, which is the heart of what intersectional feminism is — but that doesn't mean that the immediate focus of one feminist is the same as the other.

The '90s was also a weird time for feminism because the types we saw in popular culture were so disparate. We had both Spice and Riot Girls/Grrrls. There was a lot of pink pom-poms but also combat pants. There were vocal feminists and apathetic feminists. '90s feminism had something for everyone, and covered a broad range of female interests. Most of us had our feminist awakenings in the '90s (mine was something between Gwen Stefani and vampire slaying), and aligned with the kind of feminism we were seeing in popular culture at the time. Here are twelve types of '90s feminist you could be.

If you subscribed to the Cher Horowitz school of feminism, you probably came off as a bit ditzy, but that didn't mean anything when it came to your ferocity. The ditzy feminist knew her own mind, held her own, worked hard and never gave up — and she did it all in the cutest skirt and platform Mary Janes you'd ever seen. She certainly never took any nonsense from a man.

You were annoyed all the time. And so you should have been — the patriarchy was constantly breathing down your neck. Everything was abhorrent to you, from the gender dynamics of school dances to celebrity worship. You were probably a little bit of a loner, and way before your time when it came to your politics (everyone else you were growing up was definitely more interested in doing love math in their notebooks than reading books on Joan of Arc). Kat from 10 Things I Hate About You was your pop culture doppelgänger.

Your feminism awakened with the spirit of the slayer. You were bossy but made no apologies about it because you were a born leader, plus tough, capable, and smart. You felt like if you needed anything done right you'd do it yourself, and were independent enough to know that finding a man did not equal happiness.

You were into an actual school of feminism, and knew your shit. What we call "intersectionality" now you were well versed in then. No one could win in an argument against you because you were not only angry and passionate, you were active and knowledgable. You embraced womanhood in its most natural state, and railed against patriarchy at every chance you could take.

You were more of a teeny bopper and into pop music, but still kind of into being angry about being treated poorly as a woman. Instead of Kathleen Hanna, you opted for Shirley Manson and Gwen Stefani, and tie dyed all your own tank tops.

Your feminism involved a lot of literary references and strolling around talking laconically about very existential and introspective things.

Two words: Spice Girls. You were all about sticking it to the man by being a girl loudly and proudly, and tearing up the town with your gal pals.

In the '90s, being a sexually liberated feminist meant you dressed like a school girl and also knew some facts about sex, both through reading and getting involved with the literature, and, well, doing. Tricia (who was an actual school girl) from Mallrats, and Joey Lauren Adams generally, personified your vibe.

Your '90s feminism was a throwback to a history of the occult. You dressed like you were a member of the group in The Craft, burned candles and incense to worship your Goddess, and believed in the most divine spiritual powers of your sisterhood.

Like Natasha Lyonne in American Pie, you always came at your friends with the most honest, frank, feminist advice. You weren't the protagonist because you weren't ever going to bend for a boy, and that made you a super laid back, but also very wise, '90s feminist.

You were sarcastic about everything. The world was oppressing you at all times and you weren't going to smile just because you were told to or expected to. You eschewed being ladylike in exchange for a dry, observational wit that was sometimes quite morose, but also poignant.

Anna Nicole Smith and Pamela Anderson were your idols. You were all about a woman's right to be as sexually raunchy, naked, and provocative as possible. You're probably a big old Kim Kardashian fan these days.