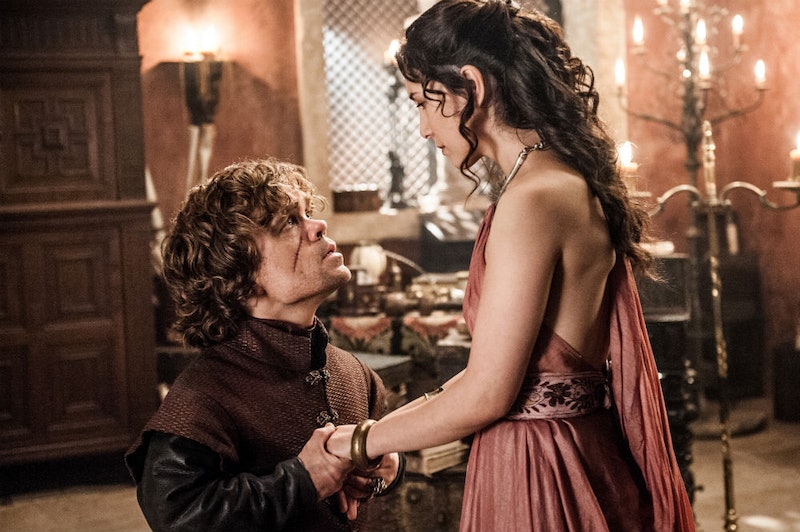 Every season, Game of Thrones premieres with at least a handful of scenes absolutely drenched in sex. If we were a bit more naive, the HBO series might have even taught us about a few of the more disturbing elements of sexual behavior (hello, Joffrey straight-up tortures and kills a prostitute at once point). But more often than not, Game of Thrones follows through on its sex-drenched promise, so much so that the idea that the series is produced by a horny 15-year-old guy continues to be a running joke. Yet somehow, Game of Thrones Season 4 premiere was nothing short of sexually frustrated.

Well, that's not to say that nothing sexual went on. For heaven's sake, we opened with Prince Oberyn grabbing a man's nether regions while shopping for prostitutes for his concubine. (Yeah, actually.) The difference is what happened after all these sexual advances, namely, absolutely nothing.

Don't worry. We haven't become mindless drones, flocking to Game of Thrones like Season 1 Tyrion to a brothel. In fact, this sexual frustration is actually a great twist on the sexplosion we tend to expect because it proves one very important thing: that sex isn't just gratuitous, salacious fluff on Game of Thrones.

Alright, it isn't always gratuitous, salacious fluff. We can't have everything.

Tyrion's true love may have forged that long-lasting, heart-melting bond with the only likable Lannister, but she's not exactly a Disney princess. Like most real women, she expects her hefty dose of emotional fulfillment to come with its natural partner: sexual fulfillment.

Now we've got a major (recurring) conflict: Shae is so angry she's considering leaving and Tyrion is showing even greater loyalty to his "child bride" Sansa.

Next Up, Jaime Lannister

After returning home from his epic, tortuous journey, Jaime was sure that Cersei would welcome him with lots of "Welcome Home!" sex. However, when he gets there, the trauma of her entire life — you know, the part where Joffrey is marrying someone she hates while Cersei has to marry a ridiculously young prince who's also secretly gay -- has turned her off of the whole sex thing and she escapes his caresses. Jaime is left more sexually frustrated than ever, especially when you consider the rather helpful appendage he's recently lost.

While we highlighted the fact that Oberyn introduced us to some very open sexual tastes, the royal didn't exactly get to execute them. He was too distracted by the Lannisters (his mortal enemies) singing and gloating in the next room. Alright, so perhaps he wasn't as sexually frustrated at the others (rage has a way of obscuring your other mental issues, as does stabbing the source of your rage in a major artery), but it's close enough.