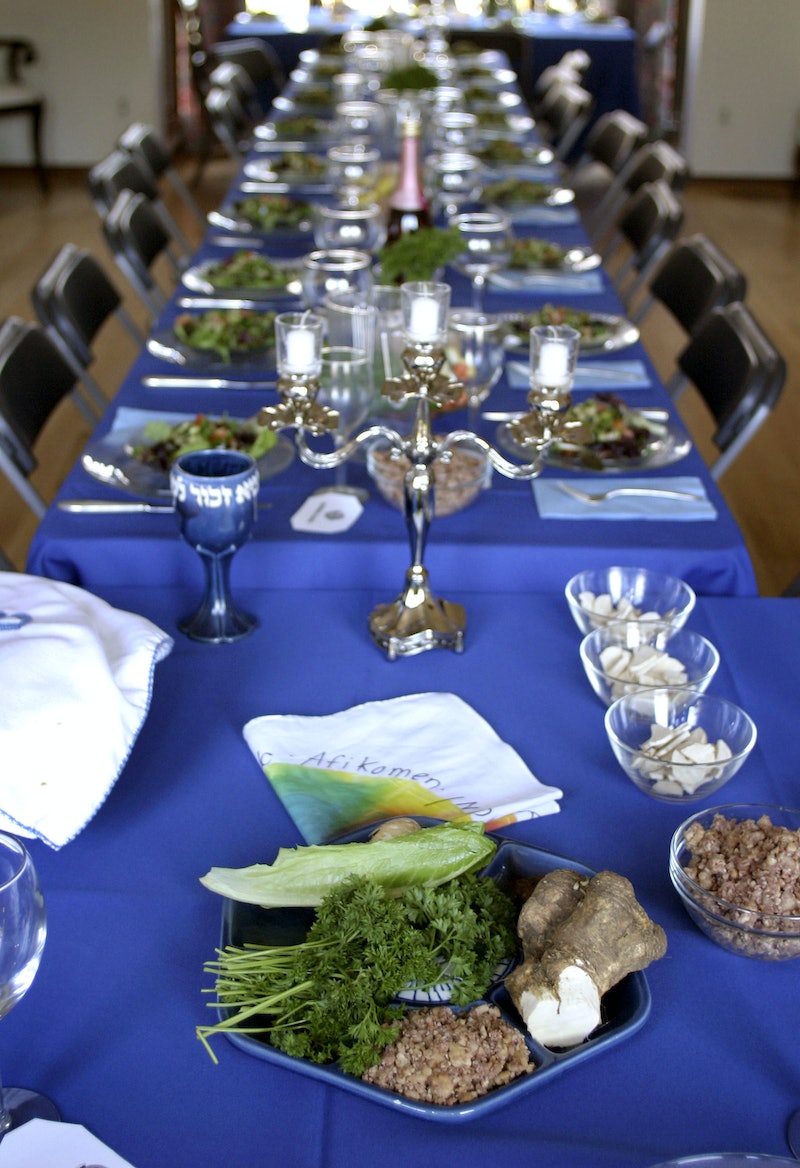 Passover is all about liberation — originally, the freedom of Israelites from Egyptian slavery, way back in the day. But Passover can also address another kind of liberation: Feminism. From Miriam's Cup ritual, to enjoying an orange on the Seder dinner plate, try these five tips to make this year's get-together a feminist spin on the Passover Seder.

Put an orange on the Seder plate

The myth goes like this: In the early 1980s, Susannah Heschel—a popular Jewish scholar (and feminist)—was giving a talk. Reportedly, as she spoke, an elderly rabbi stood up and declared, "A woman belongs on the bimah like an orange belongs on the seder plate." J Weekly explains:

Thus to show support for the changing role of women in American Jewish society, the tradition of placing an orange on the seder plate began, and Heschel became a household name at many Passover celebrations around the globe.The only problem is, according to Heschel herself, the story isn't true...Heschel was visiting a college in the Northeast where she learned that some of the students had started placing crusts of bread on their seder plates as a way to express the exclusion of women and homosexuals from Judaism.Heschel thought this was great. But since it violated the Passover dietary restrictions, she decided to modify the act, placing an orange on the plate instead of the bread crust to represent both women and homosexuals.

One very important woman — you guessed right, Miriam — gets special treatment in many feminist seders. This ritual was created in a Boston Rosh Chodesh group in the late 1980s. The Legend of Miriam's Well goes like this: when the Israelites were slacking off and not following the Torah as they should be, their punishment was having water taken away.

Moses was internally conflicted and prayed to God that he could find a way to stand by his duties and help his people at the same time. In a learning moment, God confided in him and gave him advice on being a leader to his flock. To make a longer story short, he also struck a rock and made it flow with water for Moses and his people. (Read a much better synopsis here.)

Somehow, the magical well followed them on their 40 years of traveling and never let them down when it came to providing water. God credited the miracle to prophetess Miriam, and so the water source was aptly named Miriam's Well.

Today, this history can be celebrated through group meditation and drinking from a vessel of water. It's more about the act than the actual vessel, so don't fret if you don't have anything as fancy as the cups above.

Try out a Feminist Haggadah

For those of you who aren't familiar, a "haggadah" is defined as "the text recited at the Seder on the first two nights of the Jewish Passover, including a narrative of the Exodus." It works as a set of prayers meant to lead diners through the Passover seder. Feminist Gal shares a haggadah from a friend that manages to incorporate a few modern additions — like this poem from feminist poet Adrienne Rich:

Freedom. It isn’t once, to walk out

under the Milky Way, feeling the riversof light, the fields of dark—freedom is daily, prose-bound, routineremembering. Putting together, inch by inchthe starry worlds. From all the lost collections.

An easy way to add a bit of feminist perspective to your Seder is to make sure the women at the table actually help conduct it. Pretty intuitive, but you'd be surprised how often this doesn't tend to happen.

After all is said and eaten, take some time to have a table discussion of women's role in the Exodus, or to share stories of the influential Jewish women in everyone's lives.

Take it a step further and have everyone bring along a photo of a family heirloom that ties into their Jewish heritage. Who knows — it may bring new ideas and rituals to next year's celebration. Happy Pesach!

More like this
25 Quotes About Love To Share During Pride Month 2022
By Madeleine Aggeler and Emma Garza
Sandra Bullock, Girlboss Extraordinaire
By Matt Harkins & Viviana Olen
Meet The Spice Company Founder Who Sees Chai As A Metaphor
By Madhuri Sathish-Van Atta
The 'Hocus Pocus' Sequel Finally Has A Release Date & It Makes Total Sense
By Shannon Barbour and Radhika Menon
Get Even More From Bustle — Sign Up For The Newsletter