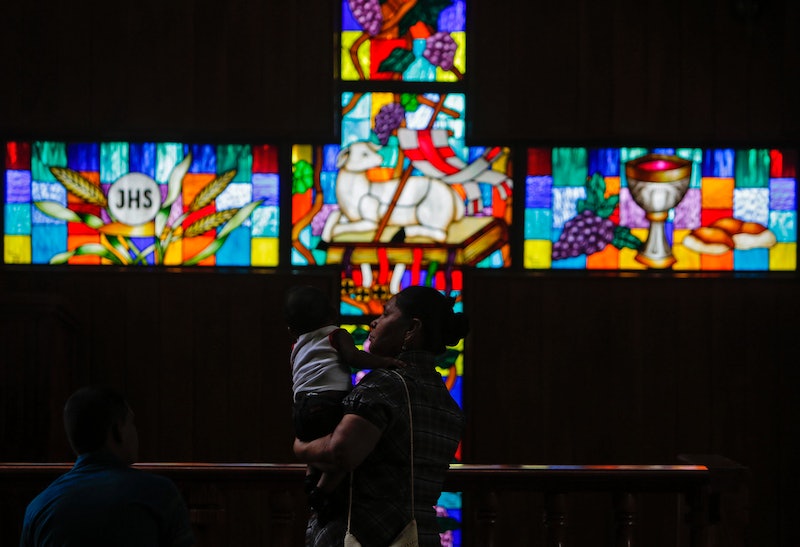 This Passover, as Jewish families around the world snuggle into pillow-backed chairs, knock back bottles of Manischewitz, and regale Moses's triumph over Egyptian slavers, let's take a moment to remember Miriam, Moses' highly-underrated sister. Actually, while we're at it, let's remember Miriam and five other bad ass heroines from biblical times. These Old Testament ass-kickers were doing the female gender proud millennia before the likes of like Hillary Clinton and Beyoncé blew our generation away.

Here's to never forgetting that biblical ladies is pimps, too.

So, Eve ate some fruit. She was hungry, you guys, and she just couldn't help herself. Willpower is a learned skill, you know? If all that sounded like a really sexist argument, that's because it is — and yet, it's the mainstream cultural narrative for the original woman and her original "sin."

Well, try the story through another lens: Eve, who thoroughly lacked precedent for, uh, anything, was forbidden by a mysterious voice to eat some tasty-looking apple-thing in her sprawling garden of edibles. Not long after, a snake chats her up, who seems about as legit as the disembodied voice known as God. Eve therefore makes a fairly autonomous decision to have a snack, and then becomes a more worldly and intelligent being who, like God, knows of good and evil.

Vashti, the short-lived queen of the Persian Empire, makes a memorable cameo at the beginning of the Purim story. During a weeklong rager at the royal palace, her drunk-ass husband, better known as King Achashveirosh, summons her to stand before him and the cavorting crowd.

"wearing the royal crown, to show her beauty to the nations and ministers, for she was indeed beautiful."

The biblical scholar translation: Achashveirosh was probably asking Vashti to make an appearance in her royal crown ... and nothing else. But Vashti took shit from no one — not even the king of the Persian Empire — and flat-out refused to show up and preen like some prize to be won at the State Fair. Achashveirosh's close advisers were like, dump that chick immediately, before other women realized they can say "no" to their husbands. So, basically, the king of a massive empire chose to divorce his wife because she had too much leadership potential.

After Vashti came Esther, a Jewish babe who played for and won King Achashveirosh's heart at the behest of her uncle Mordechai. It wasn't because she thought he was such a great dude; it was a strategic move to ensure the safety of the Jewish people, and, for some time, Esther kept her religious roots a secret. But when the king's anti-Semitic advisor Haman launched a plot to exterminate the empire's Jewish population, Esther intervened with impressive diplomatic tact.

It was illegal for even the queen to approach the king without being summoned — the penalty was death — but approach him she did to arrange a little happy hour, and soon after, a feast between herself, the king, and Haman. (Only after piquing the king's curiosity, placating Haman's ego, and spending enough time with both to reinforce her stature in court did Esther dare to call out Haman's conspiracy.) The king sided with Esther, and the Jewish people of the Persian Empire were saved.

Even though the prophetess Miriam penned an entire song in the Bible — the Song of the Sea, incidentally, which was the rockingest ode to God's miracles that the Hebrews of old ever did hear — she's still a relatively unsung heroine of the Passover tale. The famously protective older sister is primarily credited with saving her brother Moses's infant life. Though emblematic of her bravery, the anecdote frames her as an accessory to her brother's greatness, when she was really so much more.

Par exemple: remember how the Jewish people, who were always infuriating God in one way or another, were condemned to wander the desert for 40 years before reaching the Holy Land? Well, without Miriam, they wouldn't have made it much longer than 40 minutes, because she was their sole hookup for water. Yep, because of God's fondness for Miriam, she was provided with a transportable well, which she shared with everyone, because she was cool like that.

Everybody put your hands up for the only female judge mentioned in the entire Bible! That would be Deborah, the breakout star of The Book of Judges who practiced law under a palm tree, as all true ballers do. Deborah, like a true modern woman, also worked a few side jobs, including gigs as a prophet and a warrior. Her multitasking was crucial, as the Israelites were, at the time, being oppressed by the people of Canaan (another divine punishment. Get it together, Israelites!). With a nudge from God, Deborah declared a revolt on Canaan, and correctly predicted that the Israelite to win the war would be — wait for it — a woman. Whoa! Which leads us to...

It was sly Yael, another Israelite, who killed Sisera, the captain of the Canaanite army, thus fulfilling Deborah's prediction. And her victory was no random shot in the dark, but a strategic plan that toyed with and upended gender stereotypes.

As Canaan's army fell to the Israelites' forces, Yael welcomed a fleeing Sisera into her tent, where she proceeded to play the part of the perfect hostess. She poured him a drink (of milk, but sinister milk), and Sisera, much like some beloved but foolish characters in Game of Thrones , was lured into a false sense of security. Yael swaddled him in a blanket and bided her time as Sisera drifted off to sleep, and then...

grabbed a tent peg in one hand and a hammer in the other, crept up to him quietly, and drove the tent peg right through his temple into the ground below...

Hey, we don't condone murder, but them were biblical times.