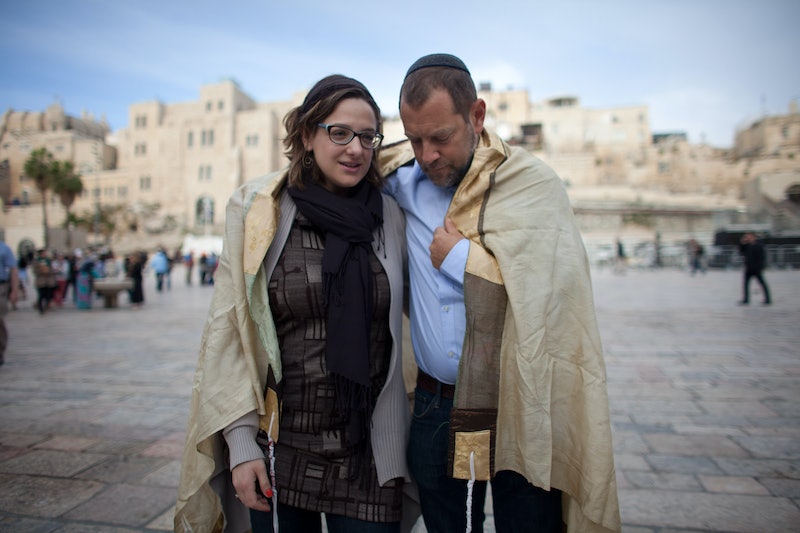 Dating is always hard, but if you're Jewish, you have even more to kvetch about. Since your first days at Hebrew School, some of your staunch old family members have insisted that you stay within the religion when it comes to your love life. The future of the Chosen People is in YOUR sexy hands, and what do you do?

You go out into the world, your veins filled with Manischevitz, and you meet someone... who isn't Jewish. Yes, that's right, you're in love with a GOY.

Yes, I know it would have been nice if my current boyfriend were Jewish, but you know what's also nice? Meeting a hot, 6'4 British guy who wants to date you.

As it turns out, his goyishe confusion can be cute. Do I wish he was more aware of how seriously awesome my family's recipe for pot roast is? Sure. But for the time being, I'm happy. If you're a Jew dating a goy, you know what I'm talking about. There are some things only we can understand. (Oh, how our people have struggled.)

Your Goy Will Think It's Cute When You Use Yiddish Words

(That would be yiddish for blow job.)

And be Endlessly Confused By The Delineations Between Shellfish And Fish

No, I don't eat shrimp, how many fricking times have I told you that now?

On The Off Chance That You Don't Keep Kosher, Cue Endless Jokes About How Much You Love Bacon

When They're Interested In Coming To Synagogue With you You're All...

You have no idea what you're getting yourself into here.

...But You Take Them Along Anyway, And It's Suitably Awkward

Because That Service Ain't Short

You spend most of the silent Amidah pondering exactly how bored and confused he is. When he looks over, you actually pretend to be studiously davening.

During Passover, You're Resentful Of Your Boo Eating Bread

He's doing it just to spite you.

But at Least There's Matzah Brei To Bring You Together

Inevitably, The Family Starts Wondering About The Mystery Boy In Your Life, And You're All

Not up for discussions, haters.

Questions. Why does everyone have so many questions?

"So Tell Me Bubbeleh, Is He Jewish?"

This is the moment where you momentarily consider how hard it would be to make your boyfriend appear Jewish. Throw a kippah on those curls and he could pass, right?

But you Know that Eventually, You'll Have To Bring Your Unsuspecting Goy Home To Meet The Fam

And that dinner will be louder than he's used to.

So For Now, You Know To Start With The Basics

Mel Brooks, The Amazing Tales Of Kavalier and Clay, and some Sarah Silverman are guaranteed to get him going on the merits of your people.

And Go Heavy On The Kisses And Matzah Ball Soup

Who can resist matzah ball soup? No one, that's who!

Because At The End Of The Day, Your Goy Might Not Know What A Yarmulke Is, But Gosh Darn It, he's Pretty Darn Cute.

And you really really like him. Even if he'll never understand why your mother has to call so damn often.