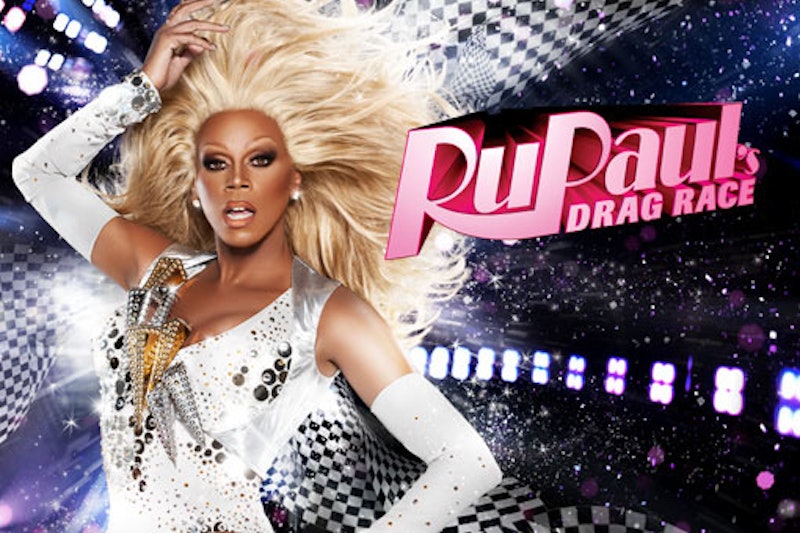 Monday night's Drag Race brought us plenty of important lessons: that Hangman becomes infinitely more engaging when played on the backsides of muscular gentlemen; that Paula Abdul is surprisingly lucid and perceptive these days; that describing yourself offhandedly as "that glittery crayon that they have with the selective boxes of Crayola crayons" is perhaps the best way to win my heart (hi, Adore). But most importantly, we all learned some major lessons through the main challenge, at least implicitly, about the fine art that is talk show hosting — one that RuPaul famously engaged in herself from 1996–1998. So, here now are the top five takeaways from our queens' oft-stumbly attempts at filling Mama Ru's seat:

I mean, was anyone really surprised that Courtney and DeLa raced to the top of the pack this week? Their just-shy-of-plastic, PR girl demeanors proved perfectly suited to making lesser-known celebrities and their anecdotes seem engaging and praiseworthy. No shade intended to this week's guests, the ever-fab Chaz Bono and his grandmother, country singer Georgia Holt — but it does take a certain amount of overexcitable finesse to make a 10-minute chat seem television-worthy. Imagine broadcasting your first date with someone, providing that someone had previously enjoyed some serious if nebulous fame; a sugary-to-a-fault demeanor could well come in handy, right?

... which we know well, because Adore and Bianca ultimately tumbled onto either side of this line — the former stuttering and "Parrrrrty"-ing where the latter railroaded the interview with her robotic set of pre-written trivia. Clearly, it's all about being at once assertive and diminutive, driving the conversation without dominating it. Makes you throw some serious respect to Wendy Williams.

3. Steer Clear of Impressions (Especially of Your Guests' Relatives)

Oh, Darienne. A hasty and ill-advised Cher if ever there was one. Chaz said it best: "Give me Chad Michaels or don't waste your time." Patrick Henry would be proud.

2. Avoid Bringing Up Political Taboos, Unless You Can Do So With Tact

After watching Untucked, one does feel that Joslyn was a little shafted in editing: Though she did indeed bring up a sensitive question to Georgia "Cher's Mom" Holt in a rather inexcusably blunt format — "If it weren't for a last minute decision at the abortion clinic, the world would never have known Cher. How do you feel about abortion?" — the late revelation that Holt had been candid about the topic on camera in the past does allow you to understand her actions at least slightly better than the initial "?!?!?!?!" However, it's one thing to ask your guests The Hard Questions and quite another to suddenly remind them how they almost made a life-altering decision in the middle of a campy drag competition — especially after her stilted "coming out" pun clusterfuck of an opener made light of that very topic. In the words of the Scruff Pit Crew's derrieres:

Personally, given that combined with the "meaty tuck" of her outfit, I am shocked she didn't lip sync.

Because really now, every time Trinity called Chaz Bono "Chad," my Trusty Viewing Partner and I physically recoiled from the screen. "Zzz!" I interjected again and again, flinching hard after each flub, while she crumpled and rolled off of the couch, trying to cram herself under the coffee table in shame. I mean, whenever a transperson is a television guest, the more jaded among us are perfectly prepared for cringe-worthy misgenderings, the kind of pure insensitivity exhibited by the likes of Katie Couric, Piers Morgan, et al. But Trinity, though thankfully entirely gender-respectful, took misnaming to a whole different and uncomfortable level. It was just — oof. Pure and utter oof, through and through. I was honestly prepared to see her go from the first "Chad" on.

I mean, come on. DeLa straight killed it. Then buzzed incessantly about its corpse.

Also, okay, Courtney — because you won the challenge and shared some moving words on Untucked, and because I'm inclined to love you anyhow, I'll give into your blatantly spoken desire for social media shares and post the big reveal of your runway look. Which is, indeed, pretty fucking spectacular. Let's just hope the confidence from this week's win doesn't end up propelling you too far sunward; we all know how faux-wings fare up there.