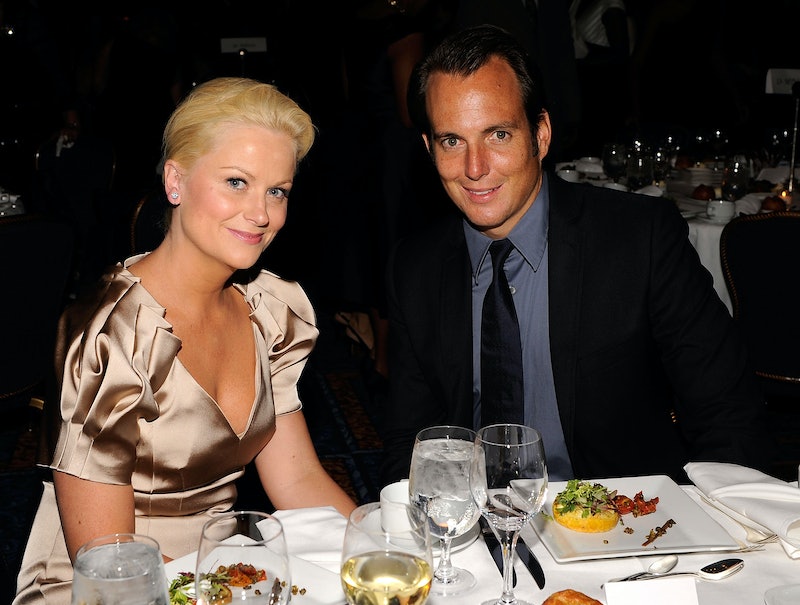 Say it ain't so! All right, it's not like we didn't have plenty of advance warning that it would come to this. After all, Will Arnett and Amy Poehler announced their separation back in September 2012. Since then, Poehler began to date Nick Kroll while Arnett was rumored to be dating Katie Lee. Anyone still lighting a hopeful candle for their relationship has probably put it out by now. And if they haven't, then they will upon hearing this final nail in the coffin: Will Arnett has filed for divorce from Amy Poehler.

Poehler and Arnett had been married for nine years before the announcement of their separation. Nine years is such a long time for a Hollywood couple that we all thought they would go the distance. They were even married longer than Beyonce and Jay Z, who are currently the gold standard for celebrity relationships. And yet Arnett has filed for visitation rights and joint legal and physical custody of the two children he had with Poehler, making their separation as final as it's ever going to get.

He said of their split back in 2013 that he had "found my happiness—which is my kids", but does that mean there's no hope of seeing these two back together, even as friends? They could always go to the Orlando Bloom and Miranda Kerr school of amicable divorces. After all, the two have appeared in so many shows and movies together that it's a shame to let that much chemistry go to waste! Here are three of their best comedy team-ups.

Amy Poehler appeared in a reoccurring role on Arrested Development as a character only known as "Gob's Wife". Their marriage was as accidental as it was hilarious and it ended, as all of Gob's relationship's inevitably end, because the girl in question fell in love with one of his less obnoxious brothers. Although in this case, the brother in question was a brother-in-law. Watching Poehler and Arnett act as husband and wife on the show is painful in retrospect considering that onscreen marriage also ended in a divorce.

Leslie Knope is a gold medalist in bad blind dates. She may be in one of the best marriages on television right now with her nerdy true love Ben Wyatt, but before Ben there was Chris. Well, Chris was never really a thing as he only appeared in one episode and highlighted just how bad a bad blind date can really be, but the cringe comedy in Leslie's cheerful attempts to try and salvage the conversation is worth it.

Blades of Glory may have been a pretty forgettable movie despite the presence of Mr. Feeny in a cameo role, but Poehler and Arnett were unforgettable as a brother-sister team of incestuous ice skaters. Yes, you read that right. They played an incestuous brother and sister ice skating team. If they can still bring the laughs even while blackmailing Pam Beesley-Halpert into helping them cheat at ice skating, then that's all the more reason to hope they get to the point of being able to collaborate again soon.

More like this
Lisa & Lenny Hochstein's Messy Divorce On 'The Real Housewives of Miami,' Explained
By Jake Viswanath
Shania Twain Replaced Brad Pitt’s Name In “That Don’t Impress Me Much” At The PCAs
By Jake Viswanath
Kim Cattrall Had A 'Sex And The City' Reunion With Creator Darren Star
By Grace Wehniainen
17 Photos Of The 'Wednesday' Cast Vs. The 1991 'Addams Family' Cast
By Grace Wehniainen
Get Even More From Bustle — Sign Up For The Newsletter