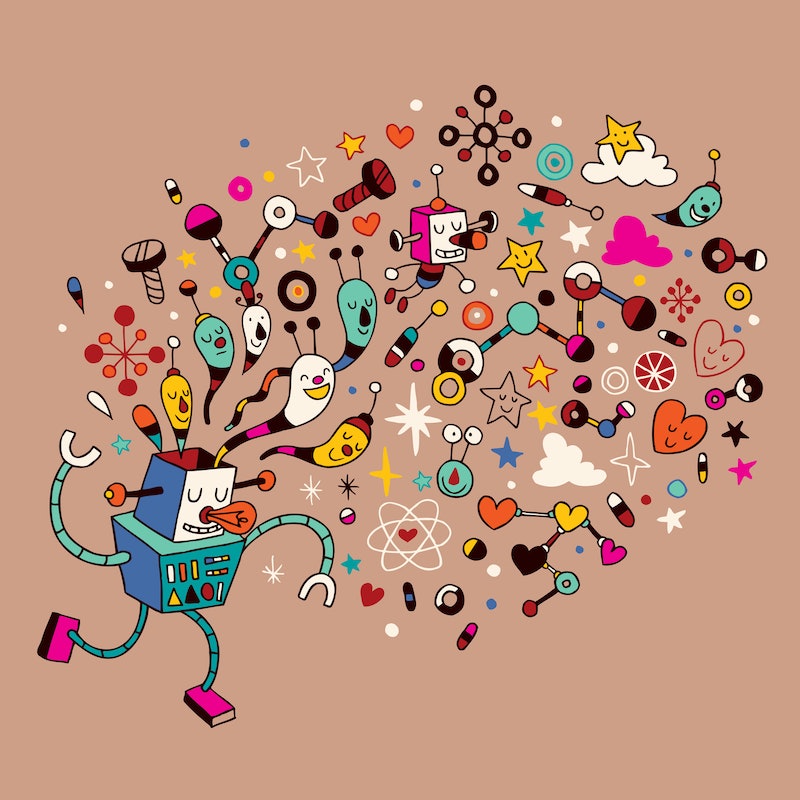 We may be addicted to our smartphones, but not all Americans are thrilled about the future of technology. A study released Thursday by the Pew Research Center shows that Americans are ambivalent about technological advancements as the world of science fiction becomes a reality around us. From teleportation to drones, it turns out many Americans are wary of the innovations to come.

We have our reasons.

While 59 percent of Americans think tech developments will improve life in the next 50 years, reactions remain mixed. The U.S. Views of Technology and the Future report reveals the range of people's hopes and fears: 81 percent believe lab-grown custom transplant organs will occur, while just 19 percent expect humans will be able to control the weather by 2064.

Civilian space travel may not be affordable in our lifetime, but advances already on the market have some of us getting our tin-foil hats ready. According to the report, sixty-three percent of Americans think opening the United States' airspace for drones would be a change for the worse, and 53 percent say the growing popularity of wearable technology like Google Glass could be more harmful than beneficial.

Of course, as advancements grow, the opportunities for positive contributions to society abound. But let's not forget the capacity for technology's many potentially dangerous consequences.

Check out five other technologies out there that we should probably all be wary of.

Sure, driverless cars sound pretty cool. Made popular by David Hasselhoff's car Kitt in Knight Rider, real-life autonomous vehicles may soon be coming to a road near you. Google's plans for a driverless car include operating in traffic via algorithms and using GPS and a rooftop scanner to navigate around other cars.

Sounds pretty cool — but also pretty hazardous. While the system is said to alert the human driver of situations in which they would need to regain control (think tollbooths), the switch from robot to human still remains a tricky task, and we can only imagine the room for error. Some people are dangerous enough of the road, what will happen when you give them the leeway to completely relax behind the wheel?

If you've ever considered what's inside your McDonald's chicken nugget, you might think twice about chowing down. But synthetic meat grown in a lab takes the cake when it comes to freaky foods. In 2013, researchers in London developed a product that tastes "almost" like a burger. (And we're not talking tofu.) The first lab-grown beef hamburger was created, cooked, and eaten using stem cells harvested from a cow's shoulder.

Americans aren't too keen on the idea: only 20 percent in the Pew study said they would be willing to eat meat grown in a lab setting. It could serve as an alternative food source, so maybe we should be so scared. Still, questions remain over the food's nutritional content. C'mon guys, it's called "in-vitro meat."

3D printers allow you to create nearly anything in your own home, given you have the luxury of owning one. Digital models could one day replace home appliances, help construct creative works of art, or even mend broken bones. Another highly-debated use of the printers, however, is printing guns.

The world's first 3D-printed gun, called the Liberator, was fired in May 2013. Critics worry that criminals and terrorists will be able to produce the weapons on their own and carry undetectable plastic guns. Aside from a reliance on plastics, there are gun control loopholes that could be applied by manufacturers.

If there's one thing you shouldn't mess with, its Mother Nature. As history has proven, she's a badass bitch who will always win. Polar vortex, anyone?

Geoengineering is a concept implemented by climate scientists as a way to slow down global warming. In theory, it's a way to make nice: humans have messed up the environment, and now we want to help put it back together. Only problem? It's not that easy.

Geoengineering can involve spraying reflective particles into the atmosphere to deflect sunlight, which could have negative effects on global rainfall patterns. Some critics claim its a way to fight pollution with even more pollution, and artificially cooling the planet could have dire consequences. Play god much, humanity?

Spoiler alert: it's not a large, cuddly, robotic friend. Big Dog is a machine is built by the Army Research Laboratory Boston Dynamics, and is designed to cross uneven terrain. It can also hurl cinder blocks with its extra arm used to pick things up. The autonomous system is controlled by on-board computer, and it's capable for running at 4 miles per hour, climbing 35-degree slopes, and carrying heavy loads.

Google's even included Boston Dynamics in its technological takeover, acquiring the company that makes robots for the U.S. military. What could go wrong?

Now if you'll excuse me, I'll go back to waxing poetic on my typewriter as the polar icecaps melt.

More like this
35 Sexy Texts To Send Your Partner
By Griffin Wynne and Carolyn Steber
15 Years Of The iPhone, In Pictures
By Emma Carey
How To Decide Between Using White, Pink, & Brown Noise
By Carolyn Steber
How to Delete (or Pause) Your Hinge Account
By Emma Carey
Get Even More From Bustle — Sign Up For The Newsletter