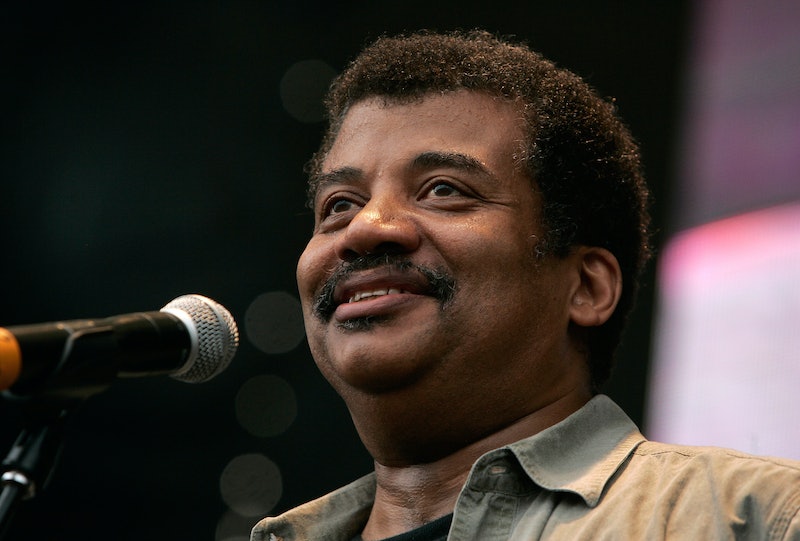 It all started 14 years ago. Some nerd at People (rightfully) managed to convince the higher-ups that Neil deGrasse Tyson should be included in the mag's Sexiest Man Alive issue in 2000, and the title of Sexiest Astrophysicist Alive stuck to Tyson like a free proton to electrons in adequately low temperatures. Nowadays, he's hosting Cosmos: A Spacetime Odyssey (an offshoot of his idol Carl Sagan's '80s treasure Cosmos: A Personal Voyage), much to the delight of nerds and nerd-lovers on Twitter everywhere.

So just what is it about him that makes his fans nerdgasm? Could it be the Ron Swanson mustache? His sassy sense of humor? Or perhaps it's the gorgeous space-themed ties (which must make him super easy to do Father's Day shopping for)? Probably all of the above, plus a few other things — let's review, shall we?

Tyson has been spreading the gospel of astrophysics for years, and, armed with a handful of degrees (including a couple Masters and a PhD), clearly knows his stuff. Plus, he's not afraid to show off. When space thriller Gravity came out last year, he took to social media to call out the numerous scientific inaccuracies in the film, posting a series of "Mysteries of #Gravity" tweets. His first target? The movie's name, which, according to Tyson, should have been "Zero-Gravity".

It's unclear as to when exactly it happened, but sometime in the past decade or so, a paradigm shifted. Geeks got hot. Actually, scratch that. Geeks were always hot — it just took the rest of the world awhile to catch on and be okay with it. (I can't be the only one who has a thing for Leonard on The Big Bang Theory, right?) People like Tyson, Bill Nye, and Wil Wheaton are cleaning up and fending off sexual offers left and right, while asses of singles have realized comic book stores are viable options for finding dates.

In her 2013 book Screw Everyone, comedian Ophira Eisenberg wrote about a former beau who she found kind of bland, until he started talking about his passion... for making pastries. When someone is passionate about something, it shows. It's sexy. Even — nay, especially — when pastries are involved. All you have to do is listen to Tyson talk and you can tell: the dude loves his science. Bow chica wow-wow.