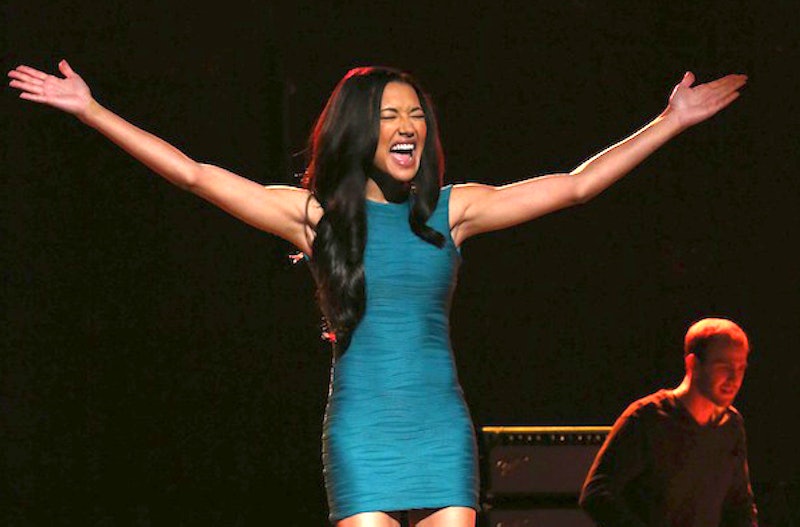 We've been (impatiently) biding our time until Santana returns to FOX's Glee by rewatching old episodes, jamming out to "Valerie" on an endless loop, and listing all the reasons why Naya Rivera rules Glee. The former Cheerio finally returns to us Tuesday night, to help frenemy Rachel celebrate her Broadway debut in Funny Girl. And we're pleased to pass on the news that Santana will continue to appear in the rest of the season. But what about next year? Will Santana be a part of Glee's sixth season?

Glee's sixth season is also its last and the producers have yet to say how involved Rivera might be in the final episodes. And sadly, rumors of Rivera and Lea Michele feuding on set have us a bit worried. So what will become of Auntie Snixx? Here are some of our Glee Season 6 theories:

Next week's episode, called "Back-Up Plan", has some major events in store for the Troubletones founders. Check out this logline for the ep:

As Mercedes struggles to complete her latest single in time to meet her release deadline, she turns to Santana for help with finding a “new sound,” and ends up putting her own career on the line for the sake of her friend.

So Mercedes and Santana will be collaborating on Mercedes' album. What if it's a huge success and the two decide to make the collaboration a permanent one? We already know they're the best duet partners. Can't you just picture them strutting around LA together, fauxhuahuas in their purses, taking the music world by storm and being generally fabulous?

Then again... Glee just did a "start a band" storyline this year with Kurt. Will they really want to repeat such a specific plot so soon?

Remember back at the end of last season, when Santana randomly declared that it had been her secret lifelong dream to be a dancer... and then sang "At The Ballet" from A Chorus Line with Sarah Jessica Parker? Ever since graduating from McKinley, Santana's life has been a bit aimless, her most steady job being a singing waitress. It's time for her to settle down into one career path, and maybe the writers will remember this declared passion of hers. She could start working as a music video backup dancer and work her way up the ranks.

Then again... Consistency has never been a strong suit of the Glee writers, and chances are they've already forgotten about this one-episode plot point.

She continues traveling the world

Of course, if Rivera doesn't sign on as a series regular next season (heaven forbid), the writers could keep using the excuse that she's "traveling" with Brittany. The two reunited lovebirds supposedly embarked on a trip to Lesbos and Hawaii at the end of the 100th episode celebration, but since a time jump occurred when the show shifted to NYC, that means Santana and Brittany have been on the road for months. Perhaps the writers will keep Brittana on this perpetual trip, popping into the story whenever convenient.

Then again... Whose dime is Santana traveling on? Her parents are inexplicably rich for people who live in Lima Heights Adjacent, but surely the money must run out at some point.

She replaces Rachel on Broadway

In the next episode, Rachel auditions for a television pilot, and since the season finale is called "The Untitled Rachel Berry Project," it seems very likely that she'll land the part. If the season really does end with Rachel leaving Broadway for sunny LA, who would the producers call upon to take her place? Why, her former understudy, of course. Sure, Santana quit — but would she really say no if they asked her to do the role full-time? And if the show follows Rachel to LA next season (Ryan Murphy has indicated that Season 6 will focus very little on NYC), then leaving Santana in the Big Apple would allow Rivera to participate as much or as little in the show as she wanted.

Then again... Brittany helped Santana realize that Broadway wasn't her dream. Would she really let her go back?

Whatever Santana ends up doing next year, all we know is that we NEED her in our lives.

More like this
Every Song In The Umbrella Academy Season 3
By Kadin Burnett
'Stranger Things' Season 4 Volume 2 Trailer Teases New Episodes Coming July 1
By Grace Wehniainen and Gabrielle Bondi
A New Season Of The Midwich Cuckoos Could Be Coming “To A Town Near You”
By El Hunt
The ‘Love, Victor’ Showrunner Gave Fans Hope For A Possible Spinoff
By Brad Witter
Get Even More From Bustle — Sign Up For The Newsletter