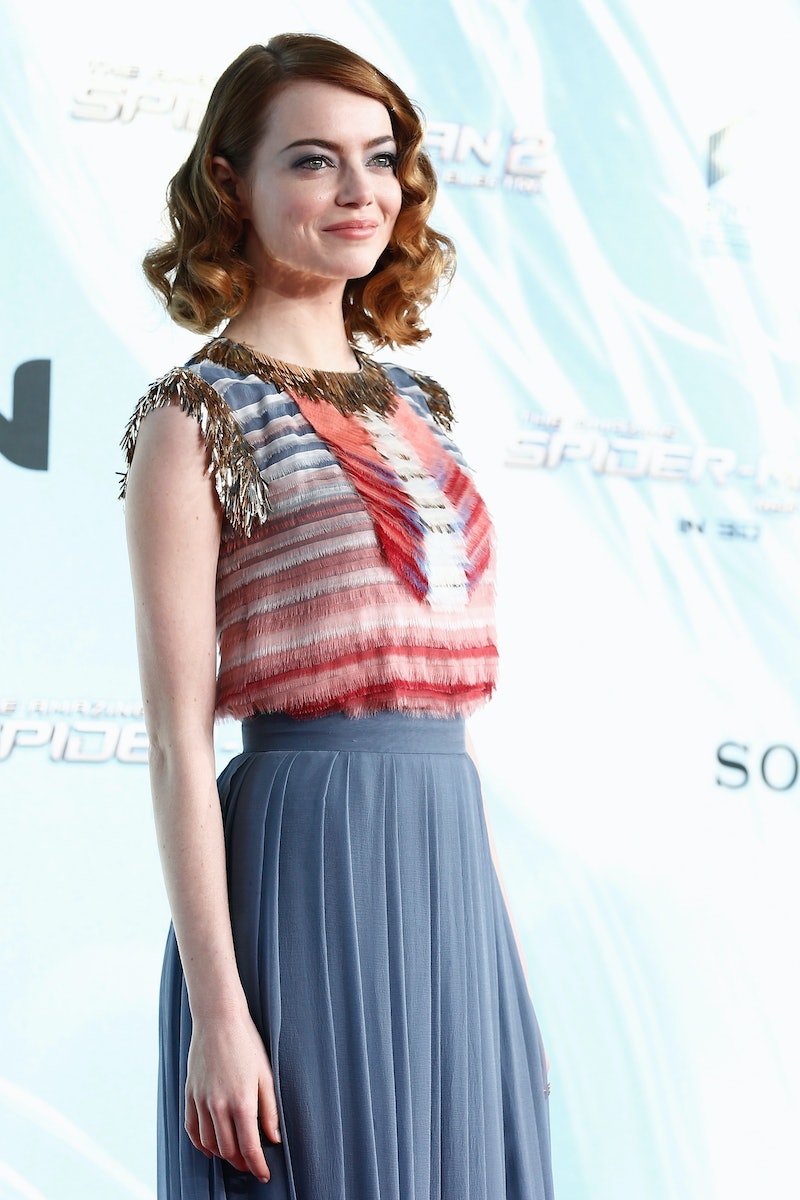 Emma Stone is a bland, basic bitch. At least she is according to the Internet. Emma Stone opened up to Vogue that she has Googled herself and been told she's basic. (Don't worry Emma, Buzzfeed told me the same thing last week.) As an Internet writer I'm always curious if celebrities actually see the stuff people write about them. Most stars fervently deny ever Googling themselves, but some have opened up that they have indeed read through what people are saying. How can you not, really? If I was famous I'd stalk myself like crazy. I already do and I'm not famous. But I feel a little better knowing these 8 stars have also admitted to Googling themselves.

For her Palm Springs International Film Festival Awards acceptance speech, Bullock decided to head to the Internet for some inspiration, scrolling through anonymous comments sections to see what people were saying about her. "I did learn a lot about myself," she confessed. "Some things I was very well aware of. 'Sandra Bullock is over 40' came up a lot. I know that. 'Sandra Bullock is way past 40.' Yep, I know that, too."

She also learned that she and Julia Roberts are apparently fighting over George Clooney. Some comments were meaner. "There is absolutely nothing special about her acting," "she is not particularly attractive," and "she is mediocre” but Bullock laughed it off saying she was grateful for her experiences, however mediocre some may see her.

"Any artist who says they don't Google their name is a big fat liar," Perry has said, admitting that she watches her Internet presence closely. Her shrewd attention allows her to debunk rumors before they spin too wildly out of control, like the time the Internet was claiming she'd dissed Miley Cyrus' look at the 2010 MuchMusic Awards. Perry hopped onto Twitter to instantly quash the idea.

The reality star goes beyond just Googling her name, and actually has a Google alert set to let her know when the Internet is talking about her. "I just got a Google alert, because Scott and I just had our date night," she said in a 2011 interview. The story in question was one with the headline "The Meatpacking District isn’t the only thing packing meat!” because her boyfriend Scott Disick had pulled a Jon Hamm and gone sans-underwear.

Kim Kardashian seemed genuinely shocked that her sister had set an alert to tell her such things. "You have your own Google alerts?" Kim asked. "We have that on record: Kourtney has her own Google alerts and checks them."

A few months later Kim was snapped holding her phone with a "Kim Kardashian" Google Alert clearly open on the screen. Perhaps she'd stolen the idea from her sister, or was just feigning shock in the earlier interview. Either way I'm not at all surprised she has a Google Alert for her name.

Of course Iron Man/Tony Stark wants to know what people think about him. In a 2009 Oscars interview RDJ confessed that he loves to see what's out there on the Internet.

It's a hoot. Some people overstate their support, like they know you. Other people are busy doing something else and just want to go on this chat site and say some despicable character assassination, which I honestly think they kind of nailed it. I do have that shortcoming. It's really fun.

He didn't elaborate on what that shortcoming was, but kudos to you random blogger who nailed his personality flaw and got your post seen by the man in question.

In the same interview Hathaway was quick to say that no, she didn't Google herself. But after Downey opened up about his own enjoyment of the Internet, she changed her opinion. "OK, I have a confession," Hathaway said. "I lied before when you asked if I Googled myself. I do. I'm embarrassed by it because I know how terrible it is."

Is anyone else suddenly thinking that she was probably that kid in school who was easily peer pressured into things because she just wanted to fit in?

She knows what the Internet thinks about her, and she's not happy about it. "The commenters are usually worse than the bloggers. I know what people say about me," she told Allure in 2009. She's reformed a bit since then and now says she doesn't read Internet comments but she does Google her outfits. “I do like to look at what I wear, though. It’s not like I put on a f*cking dress and don’t care about it after.”

During her 2009 Golden Globes victory speech Fey called out some of her online haters saying:

If you ever start to feel too good about yourself, they have this thing called the Internet! You can find a lot of people there who don’t like you! I’d like to address some of them now! BabsonLacrosse, you can suck it. DianeFan, you can suck it. Cougar-Letter, you can really suck it ’cause you’ve been after me all year. And to my husband, Jeff, I love you. Thank you very much!

At the time many thought Fey had invented those screen names and it was just a joke, but they actually exist. DianeFan said after the speech, "I'm famous ... sorry Tina Fey but I still don't think you deserved to win."

Well, you can't please them all, I suppose. Even when you make them famous.