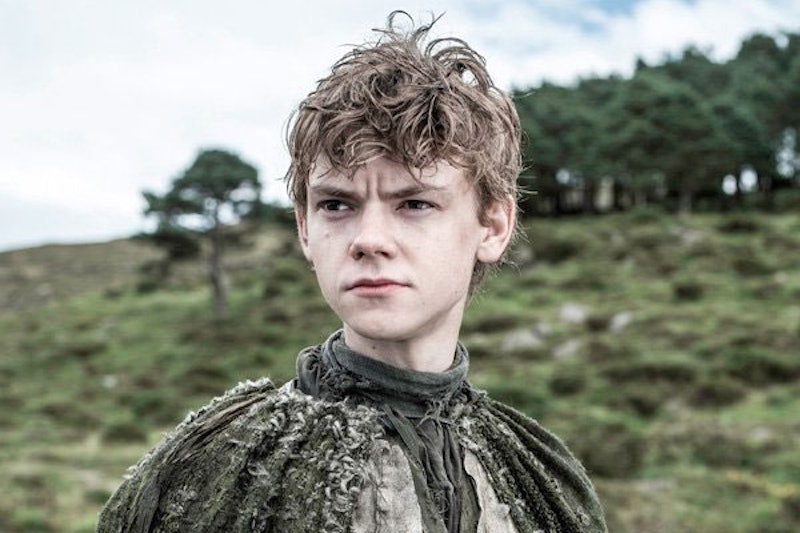 HBO's fantasy phenomenon may have more main characters than most humans have fingers, but they're all pretty recognizable, including Game of Thrones ' Jojen Reed — or as I like to call him, "boy who's following Bran around everywhere" — on HBO's Game of Thrones might look a little bit familiar to you, and that totally makes sense since he's been in a whole lot of stuff. The character is played by Thomas Brodie-Sangster, a British actor who's floated across to both sides of the pond for his roles.

However, what's possibly most surprising about the actor might not actually be what he's starred in, but rather the fact that he's currently 23 years old. I don't know about the rest of ya'll, but I would have pegged him for a 14-year-old boy, 16 tops. But maybe I'm just seriously bad at guessing ages.

All I have to say is that if you haven't already figured out where you've seen this cutie-patootie before, you're going to flip out when you realize what he's been in. Drumroll, please...

That's right, Brodie-Sangster played the overwhelmingly adorable lovestruck Sam in the rom-com Christmas classic. Anyone else want Jojen to break out into a drum solo in the next episode of GoT? Or lock eyes with a much older woman? Or chase said woman through an airport? (Okay, that last one was a bit of a reach.)

He is seriously the cutest thing ever.

In the 2005 British fantasy film, Brodie-Sangster lead his fellow on-screen siblings as they sought out to terrorize nanny after nanny. Plus, he got to act alongside the amazing Emma Thompson.

You might have missed Brodie-Sangster playing the character Samuel while you were busy watching Ben Whishaw take on his role as poet John Keats. Don't worry — I missed him, too. You can catch him looking all cute in a top hat in the film's trailer.

Okay, so you might have not recognized him from this TV show, but props to little Jojen being all awesome and voicing one of the titular characters (Ferb) of the animated Disney show. You go, Jojen!