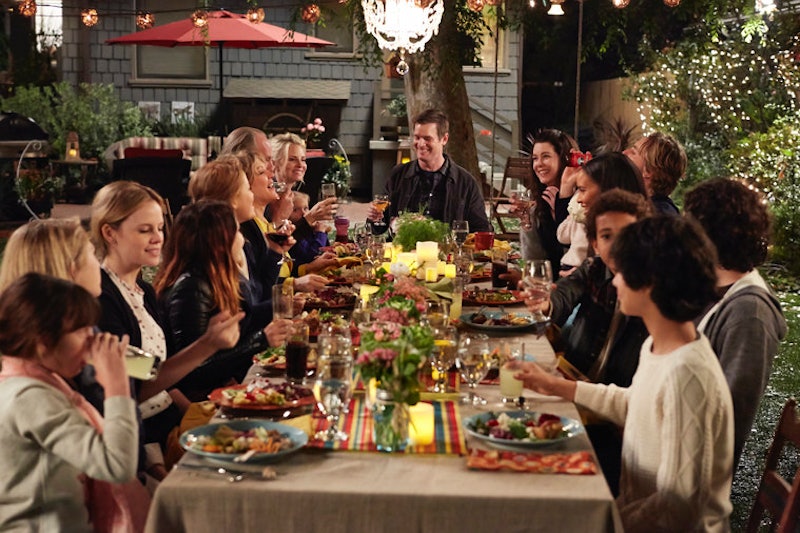 Usually, Thursday nights mark a new episode of NBC's Parenthood and now that the season is over, there's nothing to look forward to at 10 p.m. After two shortened seasons, fans were thrilled to get a 22-episode fifth season, but that only makes it harder to cope with the withdrawal of a finale. It's made even more difficult by the fact that we still don't know if it will return for a sixth season. Still, whether "The Pontiac" served as a season or series finale, you're going to miss the show this summer, so why not rewatch some old episodes? Here are the best Parenthood episodes to watch again and help soothe the pain of its absence.

The very first episode of Parenthood is always worth revisiting. It holds up much better than most pilots (a specialty of creator Jason Katim's, see Friday Night Lights) and manages to introduce each Braverman and their story without feeling rushed or disjointed. That's even with Crosby finding out he has a son, Max first being diagnosed with Asperger's, and Sarah's family moving back in with Zeek and Camille.

This Season 1 episode is notable for the beginning of Crosby and Jasmine's romantic relationship and the first real introduction of Kristina's career. She'd talked about it before, but when Bob Little runs for office, it's the first time we get to see her in the world of politics, which will become more significant later on. The best reason to watch again, however, is a hilarious appearance from Glee's Mike O'Malley as Sarah's high school boyfriend who reads a poem about her um, "flower," to a crowded room that includes Amber.

Parenthood's Season 2 Halloween episode has great moments for a lot of the Bravermans, in addition to the amazing costumes. Zeek really gets into the spirit of things, Kristina and Adam get to see Max triumph over a fear and have an adorable couple moment, and Sarah rescues Amber from a party when her friend, played by Girls' Zosia Mamet, decides to drown her sorrows in alcohol and a pool. Easily the best storyline, however, is Julia's horror at Sydney wanting to be Miss California for Halloween, instead of a more feminist figure.

Later in the second season, Drew innocently having a beer with Zeek causes Sarah to have a heartbreaking conversation with her kids about drugs and alcohol, in the same episode that has Julia and Joel talk to Sydney about death. Both conversations bring flawless scenes that are realistic to real life and the characters. As an added bonus, it includes Michael B. Jordan as Haddie's boyfriend, Alex, who isn't immediately accepted by her parents.

While this episode introduces Sarah's short-lived passion for playwriting, which is sweet at the time, the scenes most worth watching again are those between Max and his parents. After accidentally telling Max that he has Asperger's in the previous episode, "Qualities and Difficulties" shows Adam and Kristina really explaining it to him during two conversations that are guaranteed to make you cry.

"Clear Skies From Here on Out"

Unfortunately, Alex's best scene on Parenthood is also his last, as this Season 3 episode features his and Haddie's breakup, and his subsequent tear-filled goodbye to Kristina. Luckily, "Clear Skies" does a great job of balancing the emotion and humor, as its other big storyline has Zeek starring in a hilarious commercial for erectile dysfunction medication, which leads Camille to consider her own passions.

In what actually might be the best Parenthood episode of all time (or at least of the first three seasons), the family takes a road trip to visit Zeek's mother. It's hard to say why exactly, maybe it's the walkie talkies or type of bonding that can only happen during a long car ride, but something about this episode just really makes you want to be a Braverman.

"Remember Me, I'm the One Who Loves You"

The third season's penultimate episode lets the often underused Joel and Julia take the spotlight, along with Crosby and Jasmine. While a camping trip finally brings an elated Crosby and Jasmine back together, Joel and Julia suffer heartbreak as the woman who they were supposed to adopt a child from changes her mind. Important things happen to other characters too, but this episode marks an important turning point for each of these couples, bringing two long-running plots to an end.

Almost every episode from the incredible fourth season could be on this list, but "The Talk" truly stands out. After hearing the n-word in a song, Crosby and Jasmine must talk to Jabbar about it, using Parenthood's signature combination of humor and heartfelt emotion. From Crosby's Voldemort comparison to Jasmine's serious talk, the whole topic is covered beautifully. In other great storylines, "The Talk" also introduces Matt Lauria's Ryan while Max decides to run for Student Council President.

"There's Something I Need to Tell You"

The very next episode delivers again, as the whole Braverman family comes together to cheer Victor on at his first baseball game, only to be followed by tragedy when Kristina tells them that she has breast cancer. A surprise visit from Haddie to support her mother will get you a little teary, and the scene in which Kristina actually tells her family will turn that into enormous sobs. It's all done perfectly and really sets the bar for an amazing fourth season.

"What to My Wondering Eyes"

Kristina was easily the MVB (Most Valuable Braverman) of the season as Monica Potter gave an amazing performance as a woman trying to hold everything together as she faced the scariest time of her life. The mid-season finale starts on a happy note, with each Braverman household getting ready for Christmas, but quickly takes an intense turn as Kristina undergoes a serious health scare. From the almost unwatchable video Kristina left for her children to Zeek bringing Adam a sandwich and talking to the kids about Santa Claus, every scene was Parenthood at its absolute best.