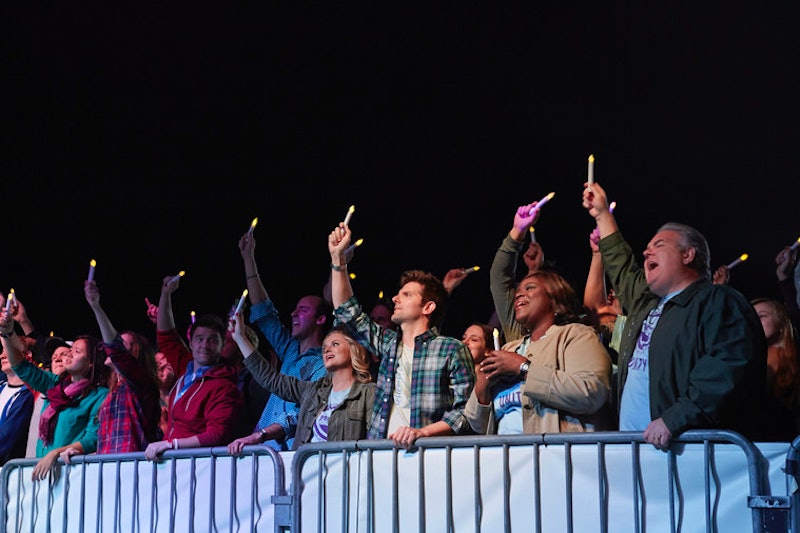 So, everybody's well aware, at this point, that the season six finale of Parks and Recreation is going to be totally nutters, right? I mean, after all the nuttery that happened in the past two episodes — particularly with Leslie and Ben finding out they're going to be parents to triplets — it seems as though the NBC comedy darling is about to change the game for themselves heading into their seventh season. Which, honestly, makes a lot of sense. This new video of the cast hinting at spoilers only convinces us doubly of that fact.

Considering how long Leslie's been mired in small town politics with her ambition growing bigger at every minute, now feels like the perfect time to do what those in the TV biz call "burn it all down and start all over again." It happens all the time when a series' idea has run its natural course and is in need of a bit of a fresh start. And with Leslie's options running the gamut — from Chicago to Pawnee — now would be the time to do it. But that, of course, leaves a lot of questions for fans desperate for the only-a-few-hours-away finale, set to air tonight (Thursday!) at 8PM for an hour. In what should've brought us a bit more insight into the episode, the cast managed to leave us with even MORE questions with their few cryptic teasers of what's to come. We've compiled a list — to make it easy for the actors, who are totally undoubtedly reading this right now and will surely head to Twitter momentarily to take time out of their busy schedules and personally answer them all for me — of our biggest quandaries, below.

More like this
'Stranger Things' Fans Are Begging For Steve To Live For The Funniest Reasons
By Grace Wehniainen
Superman & Lois Season 3 Will Introduce A Complicated New Supervillain
By Brad Witter
Where Was 'Only Murders In The Building' Filmed? The Arconia Has A Different Name IRL
By Radhika Menon
Everything To Know About True Detective Season 4
By Brad Witter
Get Even More From Bustle — Sign Up For The Newsletter