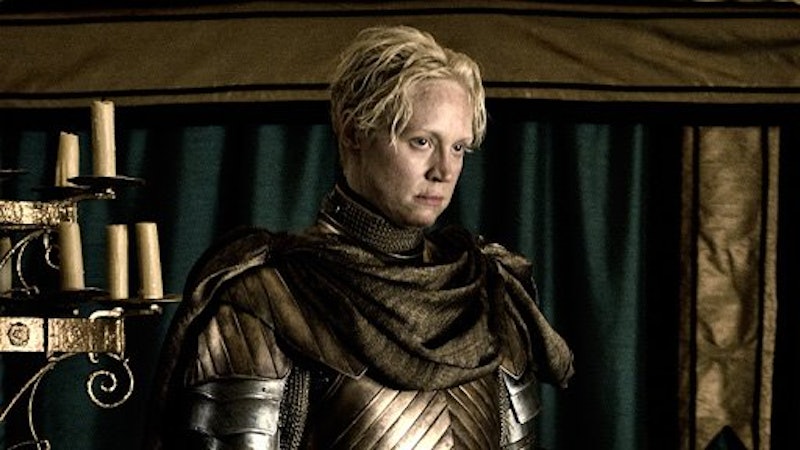 Last week’s somewhat less-explosive episode of Game of Thrones miraculously saw not a single homicide-by-wedding. Unfortunately, it also brought about the controversial decision to see Jaime and Cersei Lannister's (siblings and lovers, you guys) first intimate encounter since his return to King's Landing played out as Jaime raping Cersei next to their psychotic son's corpse, of course — cue the Game of Thrones theme song. And that relationship doesn't seem to be growing any more amiable in the future according to the book-culled storylines hinted at in the sneak peak of this Sunday's Episode 4. So what lies ahead for Jaime?

Spoilers to follow, of course. The two things that make Jaime Lannister most loathsome and most lovable — his super gross and now scary relationship with Cersei and his brotherly/'shippable (are you sensing a theme here?) relationship with Brienne of Tarth — have both been featured prominently in the first few episodes of Season 4. The two blonde women of King's Landing even got to share a scene scene invented for the show in Episode 2 (below), and it proved exactly as fierce and uncomfortable as you could have hoped for.

As Cersei says, Brienne was sworn to Renly, sworn to Catelyn Stark, and now she's sworn to Jaime. At that very moment, Brienne denies her fealty to the Kingslayer — and actress, Gwendoline Christie, denied you from reading too much into her significant "Do you love him?" pause — but Episode 4 looks like it will finally bring Jaime and Brienne to their most closest connection yet, before ripping them apart again. The woman is nothing if not loyal (and/or a potential harbinger of death).

When Lady Catelyn freed Jaime from Robb’s captivity (ugh, c'mon, Catelyn) in A Storm of Swords, it was with the caveat that Brienne go along as his right hand escort/punching bag, and with instruction that she was trading his return for her daugters', Sansa and Arya, as once promised by Uncle Tyrion. This vow was taken to heart mostly by Brienne, who swore her allegiance to Catelyn, and less by Jaime, who was tied to a horse. But the upcoming episode seems to finally call upon Jaime Lannister's redemption arc, which is a bit unfortunate, actually, given that he’s just done something completely unredeemable on the show.

With HBO's slightly altered timeline of Jaime and Brienne's return to King's Landing, we've already seen Grandpa Tywin hand over Ned Stark's split and repurposed Valyrian steel longsword (always in our hearts, Ice) to his son, Jaime, and his awful, crazy, very dead grandson, Joffrey. In George R. R. Martin's series, Jaime views the gift as a slight from his father because he can't handle the blade as he once could have with his now missing sword hand. It's his final inspiration to follow through on his promise to Catelyn Stark, handing over the new pointy toy, now aptly renamed "Oathkeeper" (also the title of this Sunday's episode), to Brienne of Tarth, charging her with finding the disappeared Sansa Stark, keeping their oath to protect her.

In the show, we've seen Jaime practicing his swordsmanship with Bronn, so its likely Jaime feels a bit less mocked by Tywin than he did in the books. Perhaps it will simply be his complete disillusionment with the Lannisters (and, hopefully, with himself) that will inspire his turn toward Stark-like nobleness. As he says himself in A Storm of Swords, it's only fitting that Sansa Stark be protected by the steel of Ned Stark.

Here's hoping for some more of that Grade-A(wkward) chemistry between Westeros' most reluctant travel companions, because no matter the details, Brienne will be setting out on her own this time... that is, until she joins up with everyone's favorite well-endowed squire.