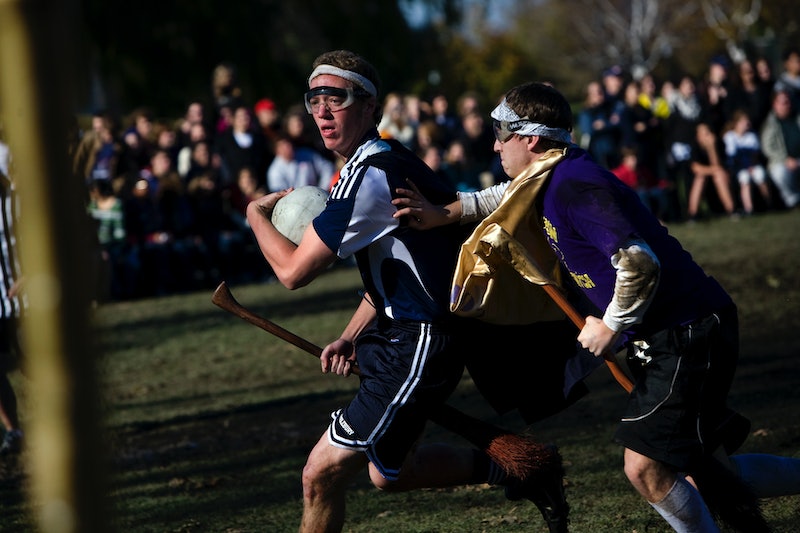 When I first transferred to Emerson College, I had no idea what to expect. I'd chosen the school because of its impressive writing program, fantastic location, and small size. After making the move, however, I quickly learned that nothing could've prepared me for Emerson. From the insane orientation traditions to the obsession with Quidditch (yes, it's a real sport), this school is, by far, the strangest, weirdest, and most surprising college to attend.

Having just finished my junior year, I can say with confidence that transferring to Emerson was the best choice I could've made — if only for the fact that for the rest of my life, I'll get to say I went to the school that made Ron Burgundy an honorary dean.

If you go here, you know what I'm talking about. There are some things only we Emerson students can truly understand.

You're constantly correcting people about what school you go to

you know that Orientation is taken very seriously

Dozens of people chanting your name? Boys in pink tutus, girls with green hair? A concert by George Watsky, an event with a guy called "The Date Doctor?" It's crazy, it's intimidating, and it's all part of Emerson's freshmen orientation week.

And so is everything else

Nothing at Emerson is taken lightly, whether it's a student's film shoot, or a radio show for WERS. Everything students here do is preparation for their future careers.

Film shoots and casting calls take up your whole weekend

Oh, were you trying to go out this weekend? Sorry! Your friend/roommate/classmate needs you to help out on their 12-hour film shoot Saturday, which probably won't go that late but there's a chance you might not get home until 3 AM. That's okay, right?

But you love every moment of it

Yeah, it's a pain, but you can't say no, because chances are that you're gonna need their help on your own project next weekend. Being a VMA major at Emerson is a vicious cycle of no sleep/long days, but it's all worth it to know that you're making a freakin' movie. How cool is that?

You're Fully Aware That Your Major Sounds Fake

Yes, "Experimental Media Production" is real, and no, we didn't make up "Directing Narrative Fiction." Also, it's not that weird to have a minor called "Science." Not bio, not chem, not physics, just... science.

English majors have a hard time getting jobs. Who knew?

Unless the Emerson Mafia gives you a hand, that is

All those annoying "does anyone know a person at NBC/MTV/Disney World/etc?" Facebook notifications are worth it when you get a job solely because you went to Emerson. If you get a job, that is.

But you know these people made it

Tobias Funke, the Fonz, and the creator of Friends all went to Emerson, and students here will never let you forget that.

Even though some alumni barely acknowledge they ever went here

Jay Leno craps on Emerson for years, and then decides he's gonna speak at graduation? We like our alums proud, thank you very much.

But on the bright side, our faculty is kind of famous

Oh, you don't have Oscar nominees and Pulitzer Prize winners as your professors? Weird.

Including Ron Burgundy, Former Dean of the School of Communications

And our real dean is just as cool

A high-five from Lee Pelton is basically the best thing ever.

Although we're all kind of pissed at him about Emerson LA

$85 million dollars for the most obtrusive building in Los Angeles? We'd have used that kind of money to, you know, lower tuition or something. Thanks, Pelton.

But you still totally want to go there

It's just so shiny.

Especially when you compare it to the Boston dorms

Piano Row is great, Colonial is okay, LB is crap, and Paramount is... no one really knows, because no one voluntarily lives in Paramount.

Having to walk five minutes to the dining hall? No thanks

LB may be run down, but nothing beats having the dining hall, the gym, and Dunkin' Donuts directly inside the building. Paramount kids have a cafe. No comparison.

And having class in Paramount is the worst

Especially when you're coming from Walker. That's just not acceptable.

But in Walker, you do have the elevators from hell

Cramming twelve people into a space meant for five is routine when you're rushing to class, but that doesn't mean it's fun.

Sure, it doesn't actually resemble Diagon Alley at all, but that little side street has helped Emerson kids heading to Walker sneak in through Tufte for years.

Or any path that doesn't involve the Boylston/Tremont intersection

Bravery is crossing the windiest intersection in the country five times a day.

Classes with window views are miserable

Being forced to watch your classmates relax in the Common while you're stuck in a four-hour lecture is torture.

Except when it's winter. And it's always winter.

The tour guide didn't talk about this.

But in the spring, there's Quidditch!

Quidditch, the one sport Emerson students are actually good at (or at least know exists).

Making fun of the fact that we don't have a football team, that is.

Almost as much as we love Boloco. And Maria's. And NYP

When you just need mozzarella sticks at 2 AM and everything else in Boston is shut down, the South Street Diner is here for you.

Because the DH just doesn't cut it

most of all, you can't imagine yourself anywhere else

Down to the Quidditch, the school pride, and obsession with Alan Rickman, Hogwarts = Emerson.

Seriously, though, what other school has Quidditch parties?

And the Will & Grace set in their library?

Well, we used to, at least. Screw you. LA campus.

And such pride in its students' inability to use numbers?

Nothing gives an Emerson student a panic attack faster than seeing a graphing calculator.

No other school has so many superstars-in-the-making

Not even you, NYU.

Suck it, NYU/Syracuse/BU: picking Emerson was the best choice we ever made.

More like this
11 Super Bowl Instagram Captions To Use On Game Day — Even If You Don’t Like Sports
By Alexis Morillo
These 3 Signs Are The Master Chefs Of The Zodiac
By Kristine Fellizar
These 4 Zodiac Signs Make The Best Bridesmaids
By Nina Kahn
The Zodiac Sign Pairs Most Likely To Have A Sibling Rivalry
By Kristine Fellizar
Get Even More From Bustle — Sign Up For The Newsletter
From hair trends to relationship advice, our daily newsletter has everything you need to sound like a person who’s on TikTok, even if you aren’t.