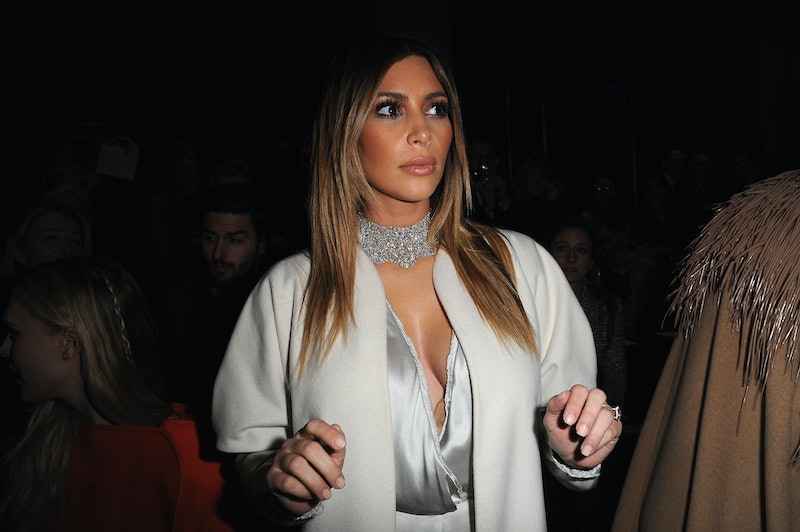 If Kim Kardashian and Kanye West's Vogue cover wasn't the fashion world infiltration heard 'round the world, then I don't know what was. After months of Internet speculation about all the ways in which West and Kardashian were plotting to land a Vogue cover, and insane headlines like "ANNA WILL NEVER RELENT" superimposed onto angry-looking pictures of Wintour, the buzz around Kim, Kanye, and Anna turned into exactly what we'd expect, given that the Kardashians were involved: a media circus.

But everything dies down eventually, and in April, Kardashian got her cover. Despite the outrageous fact that she was photographed buying multiple copies of the magazine (Real Life: If I were in Vogue, I'd want more than one copy, too), the rumors have been largely put to rest. The May cover is out, featuring Emma Stone in a weird hat, and the world has forgotten about Kimye.

When Grace Coddington recently sat down for an interview with Vanessa Friedman of Financial Times, she revealed that putting the world's most talked-about couple on the cover was her idea, not Wintour's. Pause for smelling salts. According to Coddington, Vogue needed a wedding story, and since Wintour had been hearing so much about these strange creatures called "Kim" and "Kanye" lately, she suggested that they "shoot it on lookalikes." (Footnote: huh?) To this, Coddington replied, "Why not just do it on the real thing? This is Vogue."

That's an interesting enough fact for anyone curious about what goes on behind the scenes at Vogue, but it's not worthy of the e-gasps it's getting. Yet somehow, we've manufactured and latched onto this idea of the cold, snobby, old-school, British Wintour vs. the overblown, social media-saturated, spilling-out-of-her-clothes Kardashian (who, as we absolutely refuse to forget, became famous because of a sex tape), and we just can't let the image go.

I understand the urge to idolize Vogue as a bastion of high culture. I really do. If I'm being honest with myself, of course I'd be annoyed if the Kardashian clan infiltrated some of my pet high art — like the cover of The Great Gatsby. But aren't we using some selective vision here? After all, Vogue has been putting celebrity buzzwords on their covers for years now. Their July 2013 cover girl was Katy "the most interesting thing she's done recently is dye her hair green" Perry. She's adorable, but she's no more traditionally high fashion than Kardashian is. As a matter of fact, Perry is most famous for shooting whipped cream out of her bra. And yet no one ripped up her cover and sent it to Grace Coddington in pieces.

Wintour has gone on record saying, quite strongly, that West didn't "beg" for the cover, and that the whole thing was "entirely [Vogue's] idea." Coddington may have initiated it, but that's how ideas happen. This Wintour-Kardashian feud, as far as I can tell, is all in the Internet's collective head — and it makes us look bad, not Vogue.