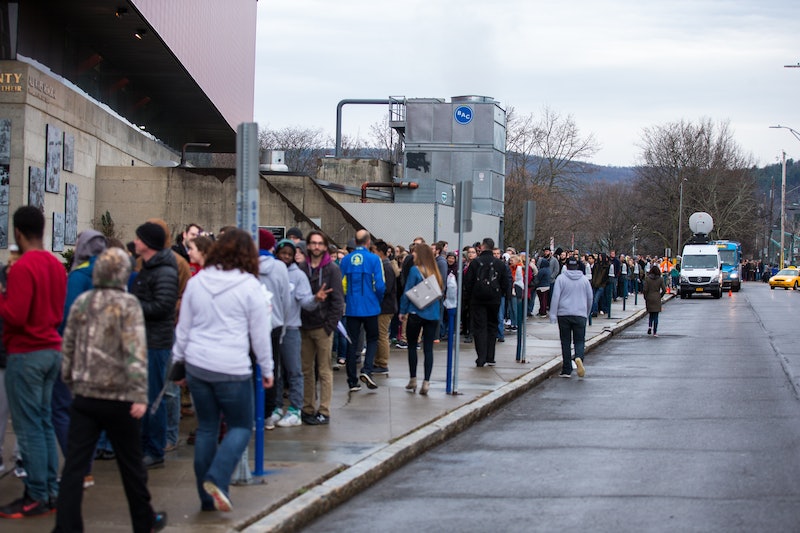 Oh, SUNY Binghamton. Some people call it the "Ivy of the SUNYS" because it's the "premier public university in the Northeast." Well, Ivy League it is not, because, let's face it: Binghamton, New York ain't Cambridge. And maybe that's a good thing.

As a Binghamton alumnus, I know that Bearcats are bright and motivated, and that they share their pride (and significantly smaller amount of students loans! Woooo public school!) with one another. After all, there are certain experiences and feelings that only we SUNY Bing can truly understand:

But then you tell people you went to "the Ivy of The SUNYs."

You've Been Asked Why You Didn't "Just Go To Cornell"

Because you can just, you know, go to Cornell, like you can go to Taco Bell.

You experienced Parade Day, and lived to tell the tale of just how much you don't recall

That pre-game for St. Patrick's Day, as supported by all of the Jews from Long Island at the school.

or you didn't go to Parade Day ... and lived to tell the tale of how awful riding the bus was

Or maybe you didn't live to tell. Those buses were hot messes on that fateful day.

You rode an OCCT bus while squished against a window

Better yet, you had a friend who drove one of these blue buses and knew how to squeeze you in during prime time hours without getting crushed to death.

Your roommate was from Long Island

If you were an artist type, you took Math In Action

And whatever the hell that cut the cake method was, it did not help you with your taxes.

You went to The Rat at least once, and you cringe to remember it

At first, you thought the Belmar was for townies

And then it became one of the only places you hung out when you decided you were "over the downtown scene" and "too old for that." You are too old, man. So old.

Because it's at The Lost Dog Cafe, WHICH IS SO SO SO GOOD

You joke about how our football team is undefeated

Because there isn't one! Haha, we're funny, us bearcats.

Is it when a bear and a cat get it on? It's certainly your mascot! Uhh, go Bearcats!

Ingrid Michaelson is more than just a pop star to you

And same goes for Billy Baldwin

Only they knew how to get around it. That building requires a bachelor of science.

You like to reference The Twilight Zone on occasion

After all, the creator of the show is a city of Binghamton native! What's up, Rod! (But seriously, sometimes you wonder if Binghamton is haunted.)

You know the stereotypes of all of the dorms

And even if College-in-the-Woods and Newing were where the parties happened, Mountainview was just so damned nice. But that hill, man. That hill was tough.

Spring Fling = School Is Almost Out!

Wegmans is your Disneyland

You know not to drink the blue stuff

But that might be an important lesson for anyone at any college, ever.

You've had to tell people that no, you don't go to college in the Hamptons. It is not Binghampton

Learn to spell, Humans of The Internet.

Again, not the Hamptons.

Because you didn't go to Boston University.

And most of all, you know that whenever you meet someone who went to Binghamton, you'll always be like: