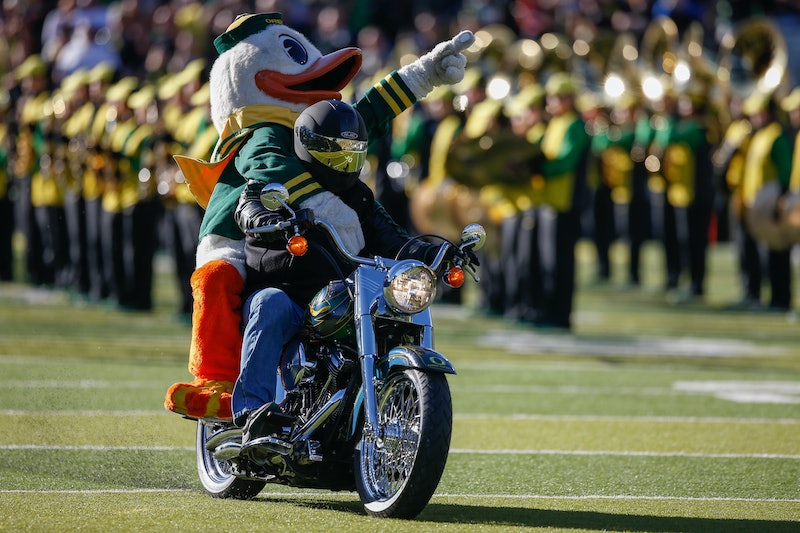 Growing up in the Pacific Northwest is a unique experience: Not only is it always raining, but you are always surrounded by kale-colored vegetation, and beautiful dense hiking trails. As we natives know, being a Pacific Northwester offers a close-knit sense of community. That's especially true for those of us who grew up in Eugene, Oregon.

We natives understand the sting of shoes ruined by unintentional puddle jumping; or seeing an orange-and-black ball cap on the head of an out-of-towner; or of witnessing the Oregon Ducks football team lose (which, as we all know, rarely happens). If you're from here, you know what I'm talking about. Here's how you know you're a true Eugene, Oregon native.

You bleed Yellow and Green

The Saturday Market is so passé...but you'll probably take your out of town relatives there when they come to visit

Because how cool and unique are these hemp necklaces and clay pots?

They're so durable and comfy!

You refer to Phil Knight as Uncle Phil, even though you're not related to him

How about a little cash for the J school, huh Uncle P?!

The only fashion sense in the town is the Ducks' multitude of different costumes, er, uniforms

It's like the Snuggie's little brother that's socially acceptable to wear in public.

You plan your summer around The Oregon Country Fair

That is, if you can score a pass — because you love getting high, public nudity, people on stilts, the drum tower, and dust as much as the next kid.

You love Hiking in the rain

And by hiking in the rain, you mean... hiking

When you try to describe the climate of your town to outsiders, the only thing they can relate to is "you know the movie Twilight?"

you know Canteens are essential

You have one in your car, on your bike, on your key ring, and probably one in your mouth right now. Burn in Hell, plastic water bottles!

Because that carbon footprint you're creating? MASSIVE.

You LOL at tie-dye appearing in major retailers

Because tie-dye isn't a trend. It's my childhood.

It might be 40 degrees out, but sunshine means summer, right?!

And you chose IHS, because you're "alternative."

But you'll continue to order one "wet bean and cheese" every Friday night at 3 am for the rest of your college career.

You know Bijou Arts Cinema used to be a morgue, and you'll choose it over the IMAX any day

Except when Spider-Man 2 comes out, because man, you love Spider-Man.

You're glad Downtown finally has more microbreweries than eateries

Who needs food, when you can have MORE. BEER?

A car? Oh, you mean my bike? Yeah I got a couple of those

And by cultured, I mean you spent Spring Break in a resort in Thailand instead of Mexico.

You live in rain boots

Mostly because the elements have already destroyed all of your "delicate" footwear.

You don't bother putting on makeup in the morning

Because it will slide right off your face by lunchtime.

You often can't tell if people you pass on street are homeless ... or your congressmen

Because putting any effort into fashion is not only frowned upon, but ostracizes you.

You eat only organic

NO EXCEPTIONS (except for Burrito Boy).

Or at least you tried going vegan at one point, just so you can say you tried.

You Have Mixed Feelings About the Logging Industry

It's Oregon's bread and butter, but... the treeeeeees!

You'll get Drunk at Max's, Falling Sky, or Rennie's Landing

None of that Webfoot shit — And Taylor's was soooo Freshman year of college.

Glenwood or Brail's is the Only Hangover Breakfast

That's a good one too.

Most of all, one thing is for certain

YOU LOVE YOUR DUCKS!!