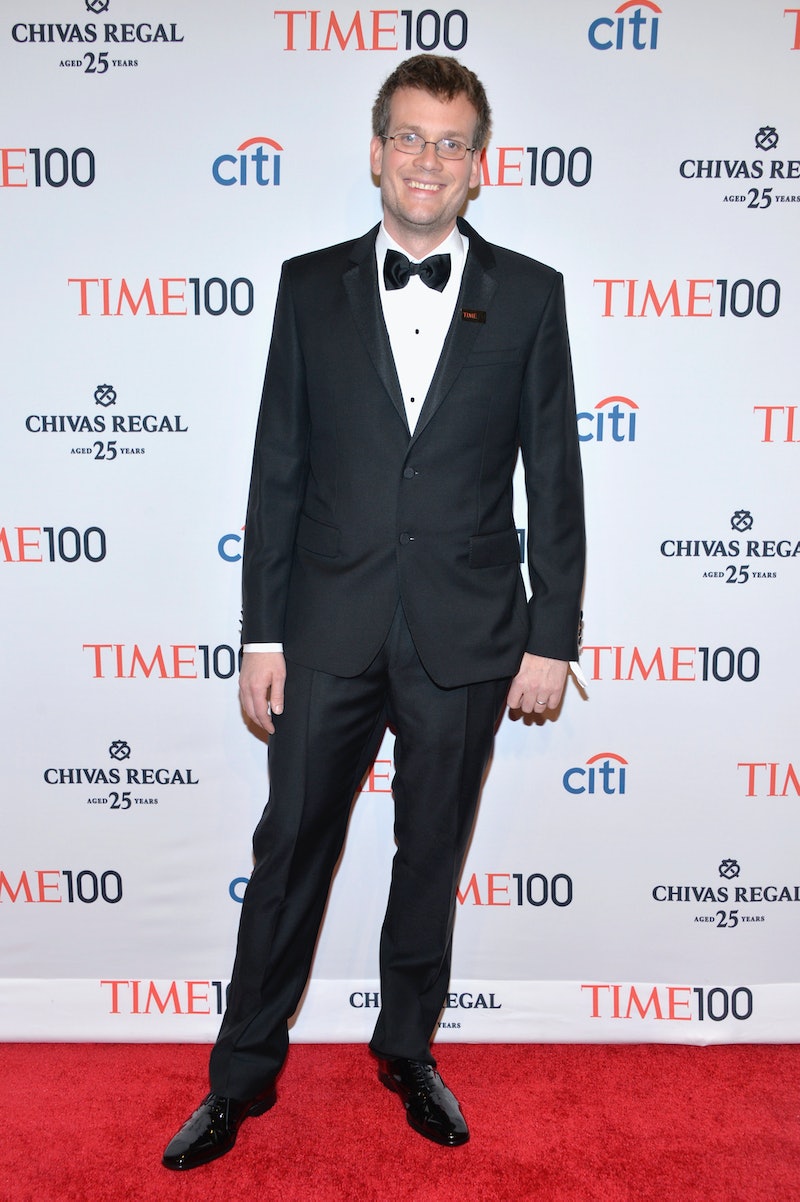 It's barely even May, but already, it's clear that John Green is having the year of his life. Between promoting the film adaptation of his bestselling book, attending the MTV Movie Awards, and being named one of the 100 most influential people in the world by Time, Green's 2014 has certainly started off on a good note. On Tuesday night, the Fault in Our Stars' author got to add another memorable event to his datebook: the Time 100 gala, where he celebrated his honor, partied with Pharrell, and karaoked with the cast of Orange is the New Black. Just like how all writers spend their weekday nights, right? (Answer: no.)

Green's night began with the author donning a tux and posing on the red carpet, which fans got to witness through the tweets he sent throughout the event's duration. "Despite supposedly being one of the world's 100 most influential people, I sure can't tell if my clip-on bow tie is upside down," Green posted before heading out, the first of many adorable reminders that despite his increasingly higher profile, the guy is just a talented dork who's unaccustomed to Hollywood-level fame.

Once he arrived, though, the tone of Green's tweets changed from self-depricating into a lovable (and enviable) mix of excited and bewildered. First, there was seeing Pharrell:

"Pharell is here. This is so weird/awesome," Green wrote.

Then, upon he and his editor, Julie Strauss-Gabel, getting a bit closer to the "Happy" singer:

"Julie and I freaking out because Pharrell is so great and he is singing like 20 feet away from us," he captioned the above.

Green on Orange is the New Black's Laverne Cox:

Green: "Omg!! Hanging out with fellow Alabaman @lavernecox at the #time100 gala. One of the nicest people I've ever met. She was so nice about my fanboying!"

And then, after meeting fellow famous nerd Neil DeGrasse Tyson:

"Neil Degraase Tyson fixed the settings only phone camera before this selfie because he is a physicist.#time100Following," Green wrote. The typos are his – understandably, he was excited to be standing next to the sexist scientist of all time.

And clearly, he's a big fan of the show, as he was spotted performing karaoke with members of its cast and crew:

From the photos above, it's evident that Green had an amazing time at the gala, and deservedly so; as all who've ever seen one of his vlogs or read any of his beautiful books knows, the author deserves every bit of the success he's achieved these last few years. That is, as long as he stays humble — but judging by the Tumblr post he wrote Wednesday morning, that shouldn't be a problem. Oh, John Green, how we love your nerdy, adorable, "500 Miles"-singing self so.