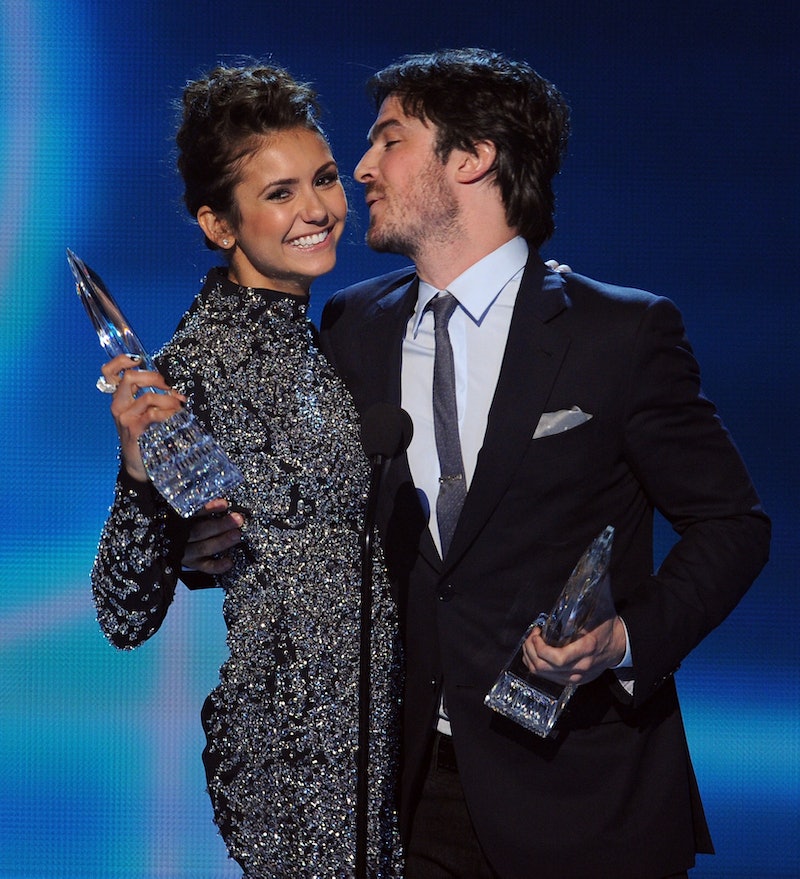 Okay, I admit it: Sometimes it's really hard for me to separate Ian Somerhalder and Nina Dobrev's relationship from their The Vampire Diaries characters' onscreen romance. But can you blame me? These two are basically Damon and Elena (Delena, affectionately) in real life. Somerhalder and Dobrev aren't back together — yet — but they could learn a lot from the trials and tribulations of Delena. At least enough to convince them to work it out once and for all.

TVD's Delena relationship has been all over the place during Season 5 of the popular CW series. They've been up, they've been down, they've gotten back together and broken it off again. And as frustrating as it is to watch them question whether or not they're soulmates — because they totally are — some of us are really rooting for them.

The same goes for Dobrev and Somerhalder, who broke up in May 2013 and have since briefly dated other people but have yet to find a long-term relationship. And we've been obsessively following the rumors about their inevitable reunion because their onscreen and offscreen chemistry just doesn't lie. (Seriously, you can't fake that, people.) If they're not already thinking about it, they should really reconsider a reunion because Delena offers up some pretty great reasons why these actors should get back together offscreen.

We're not saying that one of them hurt the other in their offscreen relationship, but, then again, we really don't know for sure. IF that's the case, they should remember the way that Elena has forgiven Damon and vice versa plenty of times over the course of the series because they're meant to be. Sometimes the people we love aren't perfect, but we can forgive them for it.

Delena's chemistry more or less threatens to blow up our televisions on the a weekly basis, whether it's physical or just the way they look at each other. And that relationship is proof that if you deny chemistry for too long, it ends up getting you in the end anyway.

On the other hand, Somerhalder and Dobrev have amazing chemistry offscreen as well. If they're smart, they should know from their Delena experiences that it'll come back to get them in the end.

They Can't "Just Be Friends"

Two weeks ago on TVD, Damon was all like, "I CAN'T JUST BE FRIENDS WITH YOU, ELENA." And we were all like, "Seriously, Elena, you can't just be his friend either." And even though Dobrev and Somerhalder are on good terms IRL, being friends with your ex — especially one who's probably your soulmate — just never works. Sorry, guys, you're only fooling yourselves there.

Onscreen, Elena rehabbed the morally depraved Damon a long time ago and she continues to inspire him to be a better person — well, when he's not drinking and they're not broken up. (Damon acts out when his feelings are hurt.) Their offscreen relationship isn't exactly the same — at least, Somerhalder doesn't look like he rips people's throats out for fun IRL — but the pair are involved in a variety of charity projects, which I'm sure rubs off on one another from time to time.

Age Ain't Nothing But A Number

There was a rumor going around that Somerhalder and Dobrev's 10-year age difference was a problem for the couple. Apparently, at 35, Somerhalder was ready to put a ring on it and 25-year-old Dobrev was not ready. That's cool, but Delena have like, a 1,000-plus year age difference, and they somehow figured out how to make it work.