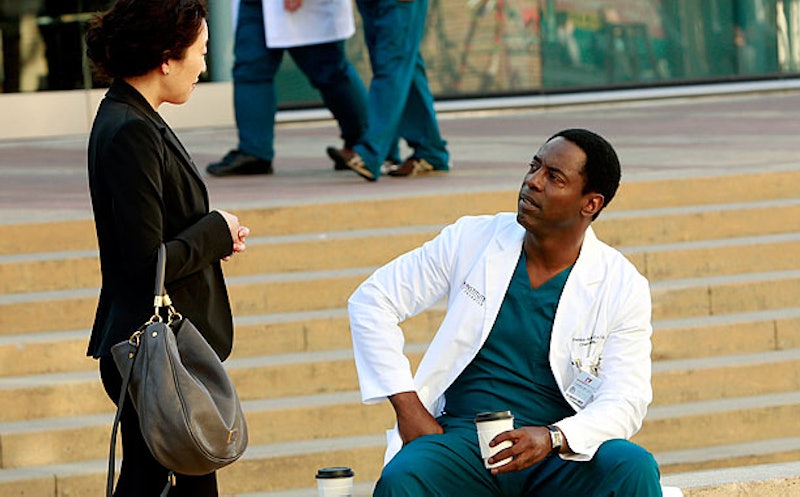 When it was first announced that Isaiah Washington was returning to Grey's Anatomy , I couldn't be the only fan to be more worried than excited. While I've always loved the character of Preston Burke, I didn't love what he did to Cristina —which, for those who've forgotten, was break up with her on their wedding day and flee the country without so much as a goodbye. The thought of him returning to Seattle, presumably to sweep her off her feet, was disconcerting; as great a couple as they were together pre-breakup, the last Cristina needed was another romance, especially one that previously left her so scarred (not to mention eyebrow-less). So, on Thursday night, when Burke appeared in that Zurich auditorium, I prayed to the Grey's gods that Cristina wouldn't fly into his arms — and, thankfully, Shonda Rhimes was listening.

Although there were certainly a few moments containing a possibility of a rekindled romance, the purpose of Burke's re-appearance turned out not to be winning Cristina back, but rather, convincing her to take over his lab in Zurich. To Cristina (and our) surprise, Burke was married with a child, and was ready to give up his institute in order to have a quieter life in Milan with his family. He knew Cristina had become the brilliant surgeon he'd dreamed she could be, and wanted her to continue the groundbreaking work (and possibly Harper Avery-winning?) he's started in the lab. And despite her initial hesitation, Cristina, as we and Burke both knew she would, said yes.

It's a fitting exit from Seattle for Cristina, setting her up to focus on unprecedented surgery — what she's determined she wants more than anything else — while putting a few thousand miles in between her and Seattle, aka Owen. A few episodes ago, she saw what her future could be if she stayed at the hospital, and it was bleak; moving to Zurich and running Burke's lab is the only outcome that truly makes sense for her character.

And, much to my relief, that future doesn't include Burke himself. Their encounter in Zurich was powerful and satisfying, but a long-term reunion wouldn't bring either character any real happiness. As a couple, Burke and Cristina were "consuming," as Burke said on Thursday, but that's a far cry from healthy. Like Meredith reminded Cristina through voicemail, Burke "cut away pieces" of Cristina when they were together, unintentionally reducing her to a fragment of the person she was before him. And Burke, like Owen, wouldn't have been content never having kids; as shown by his life post-Seattle, he was willing to give up surgery for a family, and while Cristina could respect that choice, she'd never understand it. Despite their obvious chemistry, Burke and Cristina were not meant to be together, seven years ago or today.

Still, that's not to say the possibility of them re-connecting wasn't tempting, at least at first. From the moment they locked eyes in that auditorium, viewers remembered exactly why the couple was so beloved in Grey's first few seasons. They share an intense, potent connection, stronger at times than even Cristina's and Owen's. As shown by Burke's sly comments — "tell Meredith I say hello," when Cristina goes to make a call after she runs into him — he gets Cristina, in a way that few other people in her life ever have. Watching them interact, first in that auditorium and then in the OR, was hugely affecting. They may not belong together, but man, do they have chemistry.

Yet, as we all know, Cristina isn't meant to be attached to someone like Burke or Owen, at least not now. After years of compromise, she's finally realized that she won't be happy unless her career comes first, and while that may cost her a relationship or two, it's what she needs in order to thrive. Cristina is not Cristina unless she's working, and getting to run a lab in Zurich, free of Owen or Burke or anything tying her down, is the culmination of everything she's strived for over the last ten years.

So while I admit that the idea of Cristina and Burke together again is appealing, I know that it wouldn't have made sense, not in the long run. When Cristina leaves Seattle in two weeks, it needs to be unattached and open-ended, true to her character's ambitions. Her only lasting connection should be to Meredith, her "person" forever and always; Owen, although, of course, deserving of a goodbye, is meant for a different path than the one Cristina's about to pursue. Her exit from Grey-Sloan Memorial will certainly be hard on those who love her (including us), but we'll be comforted by knowing that it's for the best. Cristina isn't long for the world of Seattle, and no one, not Owen or Burke or even the fans who don't want to see Sandra Oh leave, can hold her back from moving on.