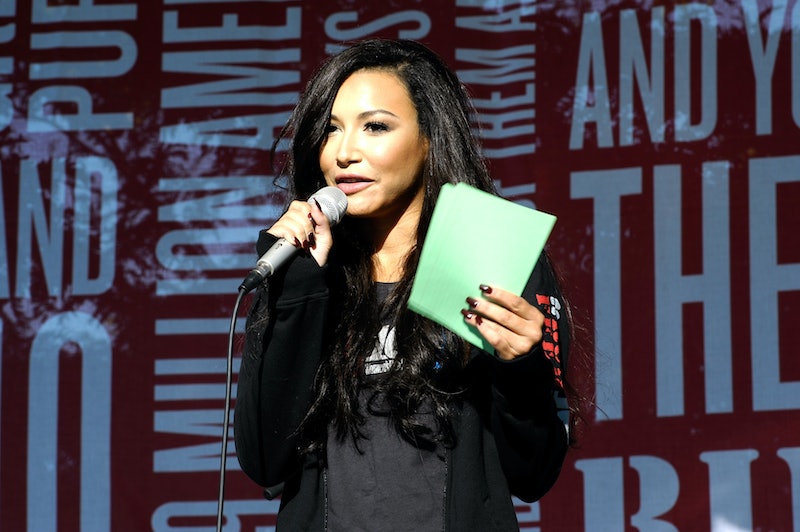 What in the world is really going on with Naya Rivera?! Though the Glee actress was never a tabloid staple, these past few weeks changed all of that. Brittana shippers everywhere shed tears over the news that Naya was fired from Glee . Then Glee fans rejoiced which was her reps claiming that, no, Naya was not fired from the Fox musical drama. Great, more Santana! Maybe these rumors are just the work of a sloppy reporter, right? Err, maybe not. Turns out that the Glee rumor isn't the only Naya report that her reps are saying is totally false. It was just yesterday that the news broke that Naya was dropped from Columbia Records, where she had previously recorded an unreleased album... and once again, her reps are saying that it's all bogus. Her reps had this to say in a statement to Us Weekly:

The newest story claiming that Naya Rivera was dropped from her recording contract with Columbia Records is absolutely false. If the 'news' outlets who put out this story had bothered to contact anyone from her team, they would have learned this was false.

Uh, okay. So what the hell is going on here? I have a few suspicions about what the real deal is behind these Naya rumors. First, let's go with the most obvious: Naya really is the crazy diva that the tabloid rumors are making her out to be, and her reps are denying it to try to preserve her image. Okay, makes sense... sort of. But her reps seem pretty angry that someone would be spilling details about Naya that they claim aren't true. After all, if Naya was really dropped by the record label, it wouldn't be very hard to prove.

Okay, time for theory number two. What if someone is planting stories about Naya in the press that are not-exactly true? There are a couple of reasons why someone would want to do this. Let's start with the most cynical, shall we? What if Naya's "people" were drumming up their own rumors in order to garner more press for the celebrity? As much as I love Santana Lopez, I can't think of the last project that Naya did outside of that character. Maybe Naya was planning on leaving Glee all along, but wanted some juicy gossip to follow her once she finally ran out the door. Or maybe she was never planning on leaving Glee at all, and she was written out of the finale for other reasons. It's all very suspicious.

Then again, there is a scary option to consider, and that's that someone is out to sabotage Naya's career. It would be an odd thing to do, considering that Naya is a medium-level TV star with a show that will be ending next season, but there's always the possibility that someone out there is pissed at Naya and wants her to look like a downright train wreck in the press. I know that the fingers are pointing straight at Lea Michele right now if that's the case (she and Naya had an alleged feud on the set of Glee ) but I sincerely doubt that Lea is really out to sabotage Naya's career — she's way too busy building up her own every single chance she has.

I don't know what's going on with Naya's career at this moment — will she be back on Glee eventually? — but one thing is for sure: Naya's recent tabloid drama is far more intriguing than whatever is going on on the show she was allegedly fired from.